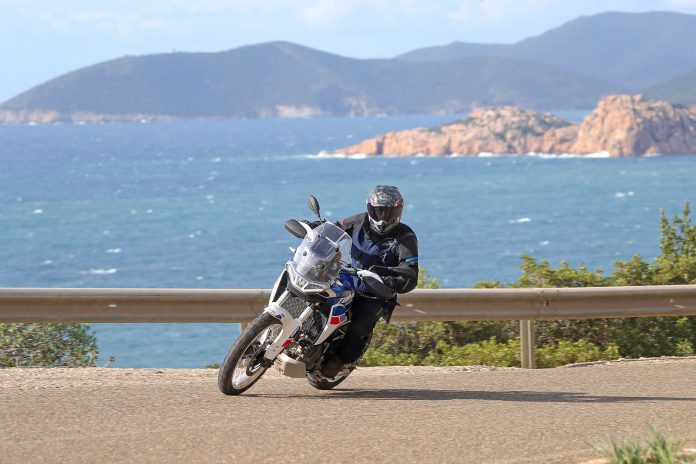 One hundred thirty-two miles off the west coast of Italy rises Sardinia, the second-largest island in the Mediterranean Sea. A population of approximately 1.6 million stimulates an annual GDP of roughly €34.9 billion for this autonomous region of Italy. At one time, agriculture and mining carried much of that economic weight. However, these days, tourism does the heavy lifting, and the island has solidified its presence as a summer hotspot. All of that can be gleaned from a brochure, but that won’t tell you that Sardinia—locally known as Sardigna—above all else, is a treasure for two-wheeled enthusiasts. 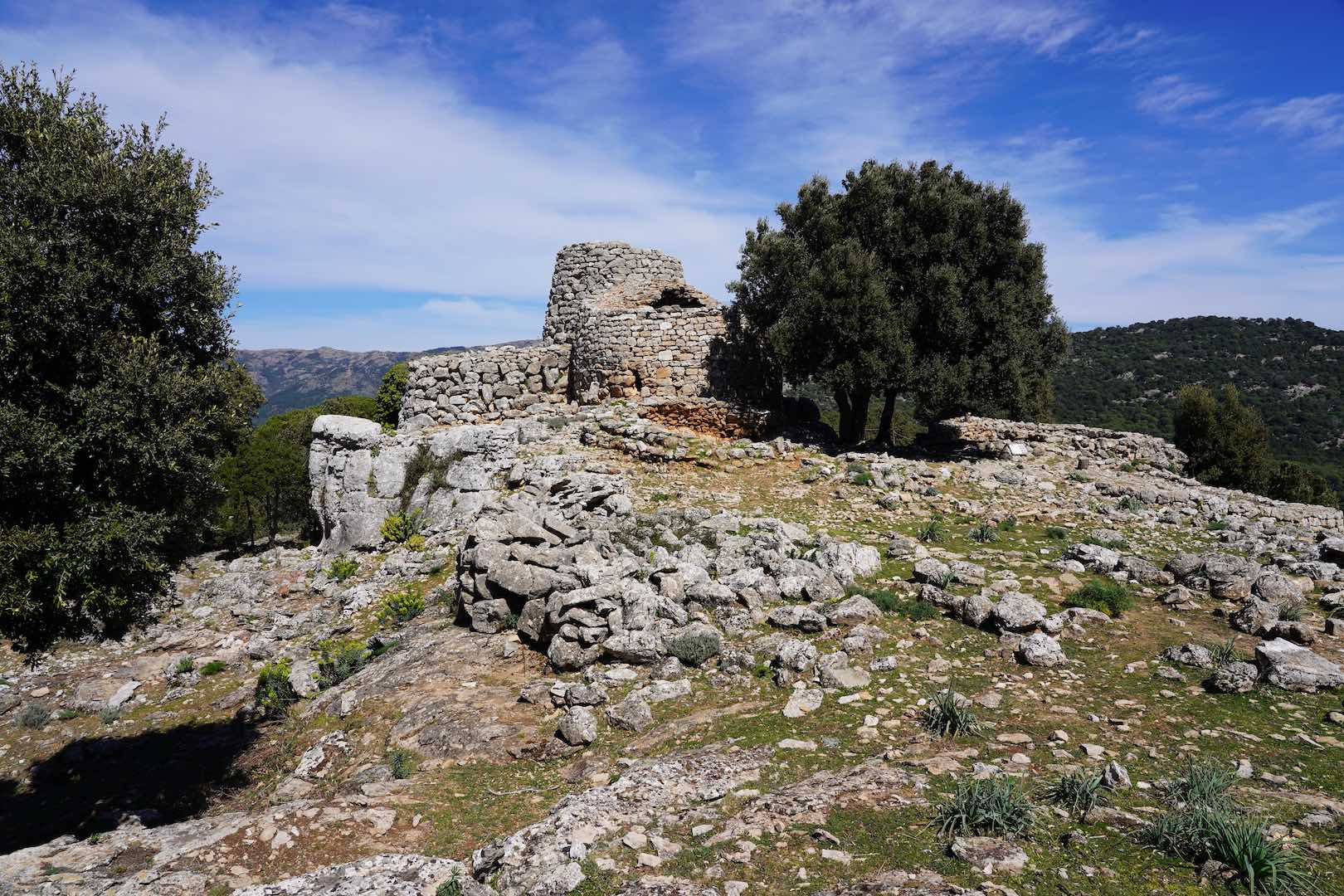 Whether it’s the salt-sprayed air or sparsely-populated roads that set the tone is still up for debate, but Sardinia seems to be a bit of a time capsule, collecting the ruins of civilizations in its tidy 9300 square miles. Its mystique is nearly palpable, and most certainly visible in the thousands of nuraghe that dot the island. With no written records or other evidence left behind, these ancient stone structures are all that remain of the Nuragic culture—a people who are only spoken in a few fleeting references by the Greeks and Romans, who later occupied the island.And if there were ever a muse to conjure up a god or two, Sardinia is a fitting locale. Benevolent as he is, it seems Jupiter blessed us with a lovely mix of Mediterranean winter weather while testing the 2022 Aprilia Tuareg 660. A chilly morning, a spot or two of rain, and bright rays of sunshine throughout checkered our day. 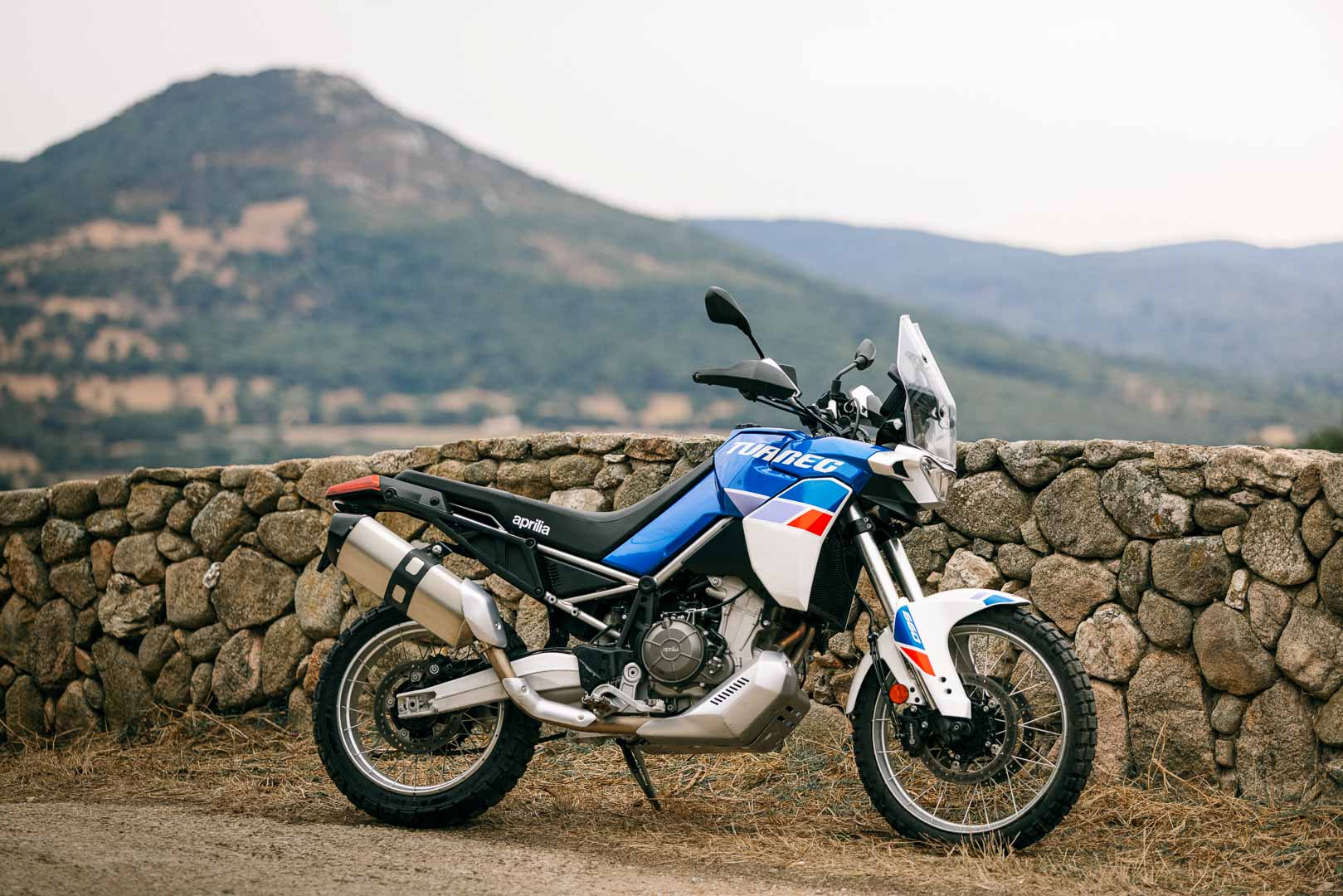 We don’t need to thumb pages of antiquity to see the last examples of Aprilia’s off-road efforts. The Italian marquee’s off-roading heydays took place during the neon-blur that was the 1980s, cranking out single-cylinder motocross, trials bikes, and dual-sport motorcycles, alongside its legendary roadracing steeds. Virtually no one was immune to the rally-raid siren song back then, with Aprilia testing the original Tuareg 600’s mettle against the Paris-Dakar Rally in 1989.Turn the clock forward a few decades, and Aprilia’s modern Tuareg 660 is proving itself to be more than a hasty throwback, with its sights fixed on becoming the next midsize all-arounder, promising road manners with off-road prowess. Never mind the liter-class ADV behemoths that only the most grizzled off-road veterans can tame, the Tuareg’s user-friendly nature provides loads of fun at a competitive $11,999 starting price. 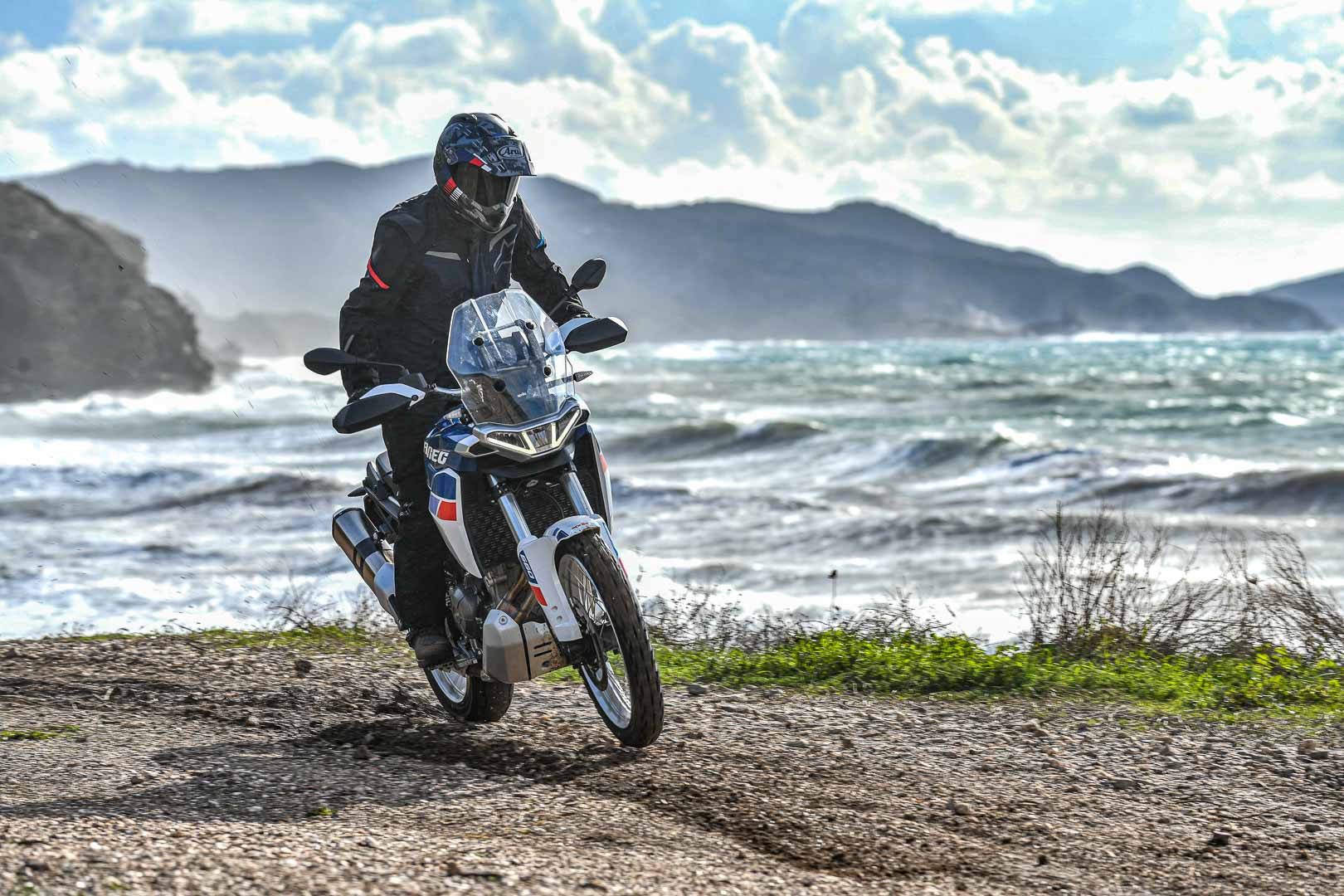 Outside the hustle and bustle of the island’s capital city of Cagliari, it becomes clear that the million or so inhabitants make themselves scarce, leaving curvaceous roadways at your disposal. I began our morning by disturbing the peace of Pula, firing up the revised 659cc parallel-twin engine, illustrating that the new high-mount exhaust retains all the bark we fell in love with on the RS 660 and Tuono 660.Unlike its street-biased cousins, the Tuareg emphasizes low and midrange power by using an updated camshaft and tune, alongside a new airbox with a quick-change air filter, intake, and shorter gearing, adding quite a bit of pep in its step off the line. There’s also a low-profile oil pan to create a noteworthy 9.4 inches of ground clearance.As they say, there are always compromises. Top-end power is sacrificed, not that it’s missed in this ADV application. The Tuareg claims a nod-worthy 80 horsepower at 9250 rpm, and 52 ft-lbs of torque at 6500 rpm is achieved earlier. Twenty horsepower is subtracted, while gaining three ft-lbs of torque—at their peaks, of course. 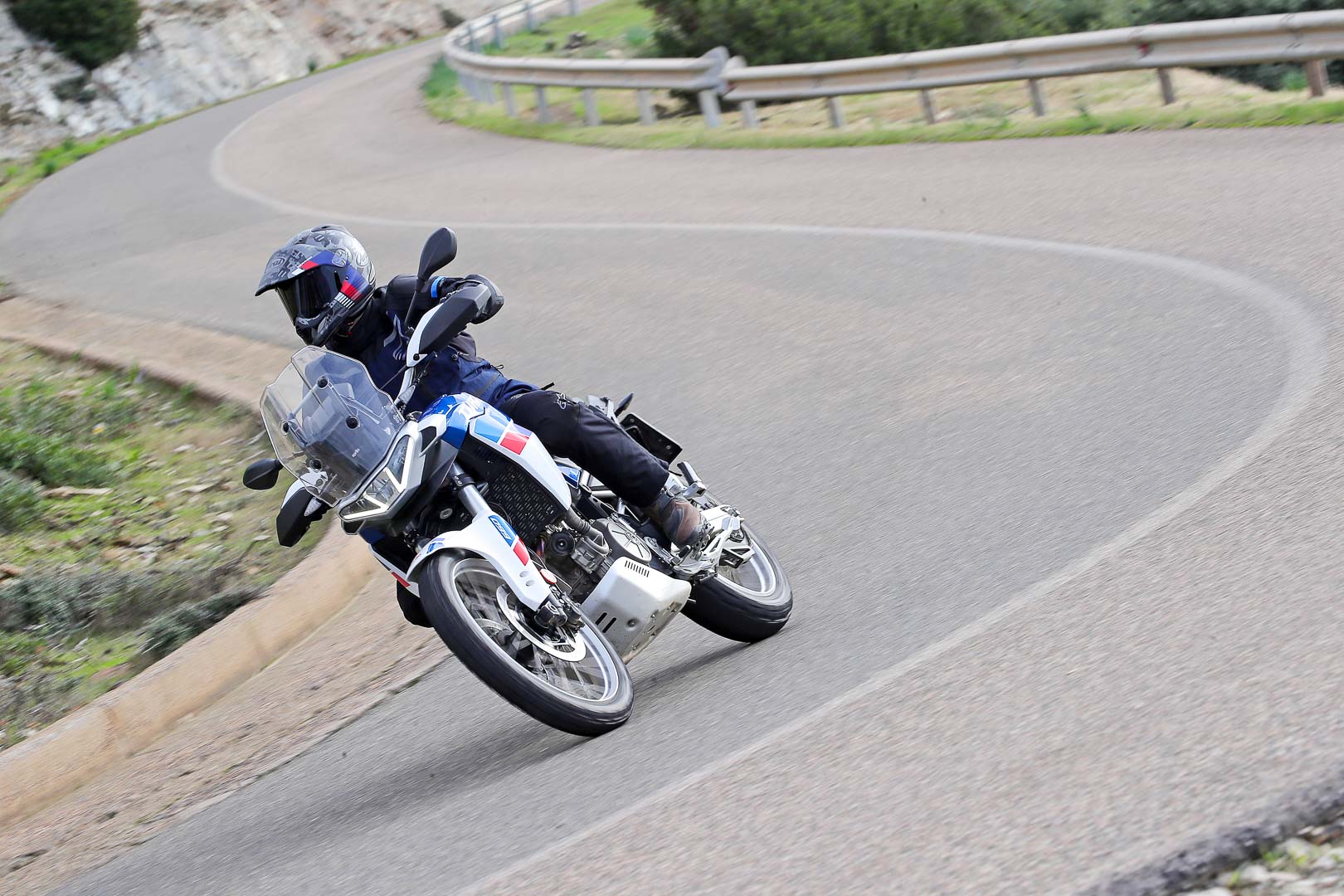 This pip of parallel-twin has all the snort and snarl I could want, delivered in a supremely tractable fashion, which riders from across the skill spectrum will appreciate on or off-road. Winding it up towards the coast, the Tuareg happily cruises at freeway speeds. There is roll-on power to spare, with the intake howl adding to the fun.The $200 accessory up/down quickshifter is a worthy addition, making upshifts as deftly as its street-bike cousins, while the auto-blip could use a little smoothing at lazier rpm. You’ll be in for a treat when on the pipe, though. Tacking onto my shortlist of minor gripes is a bit of heat from the radiator vents, which are aimed directly at the knees. On my colder ride, I welcomed it, but can imagine feeling different when deep in the summer months.The cure for the common jetlag on Sardinia seems to be Strada Provinciale 71 that hugs the southern tip of the island. It’s a road that I’d set up camp on and call home if the local authorities permitted. Fast sweeping corners, tight ascending radius turns, flat-out stretches, blind rises, and more are just the thing to perk you up. 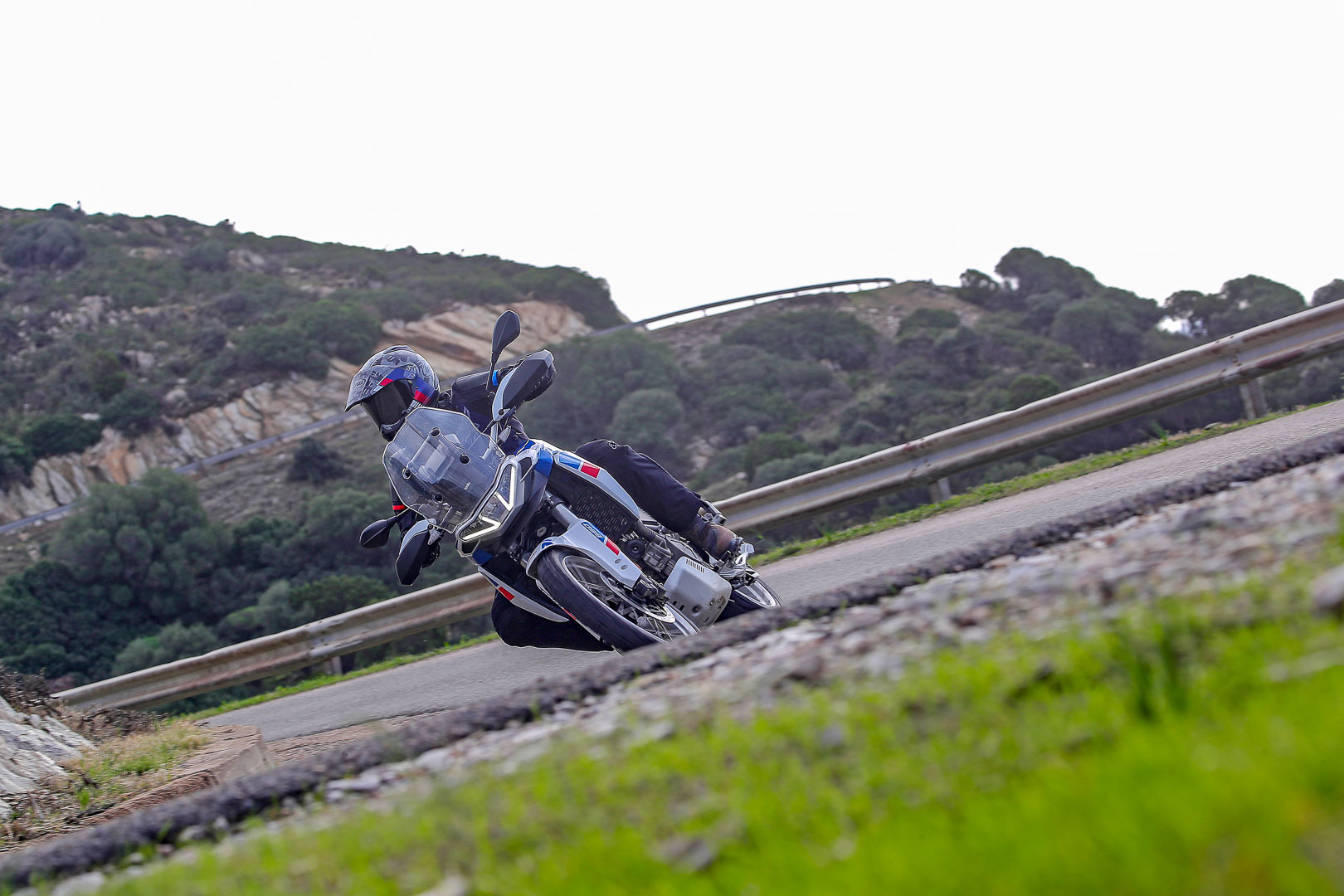 Aprilia worked hard to make its lanky ADV geometry handle well in all situations, especially on the road, by dialing in the stiffness tubular-steel frame and aluminum swingarm just so. In truth, the chassis is less rigid than its street-biased brethren to ensure positive feedback on or off-road, using six mounting points instead of two on the Tuono 660 and three on the RS 660.There is an almost supermoto quality to the Tuareg. It loves being pitched into corners hard on the brakes, just as much as it enjoys casually cruising past mesmerizing coastal views. Transitions from side to side are stable, and the sheer amount of mechanical grip the 21- and 18-inch wheels shod with Pirelli Scorpion Rally STR rubber can achieve is impressive. The larger tubeless wire-spoked hoops are needed to roll over off-road obstacles, and Aprilia managed to get them to work on the street admirably, too.My pavement quota filled, I pointed my nose at the countless fire roads through the Sardinian mountains to see what the plush 9.4 inches of fully-adjustable KYB suspension could handle. In practice, the KYB components sop up hits like moddizzosu in red sauce, gobbling up rocky terrain and ensuring grip is on hand. The whole affair is quite forgiving, allowing you to find your rhythm while power-sliding past nearby herds of sheep—not as aggressive as the KTM 890 Adventure R and more capable than the Yamaha Ténéré 700. 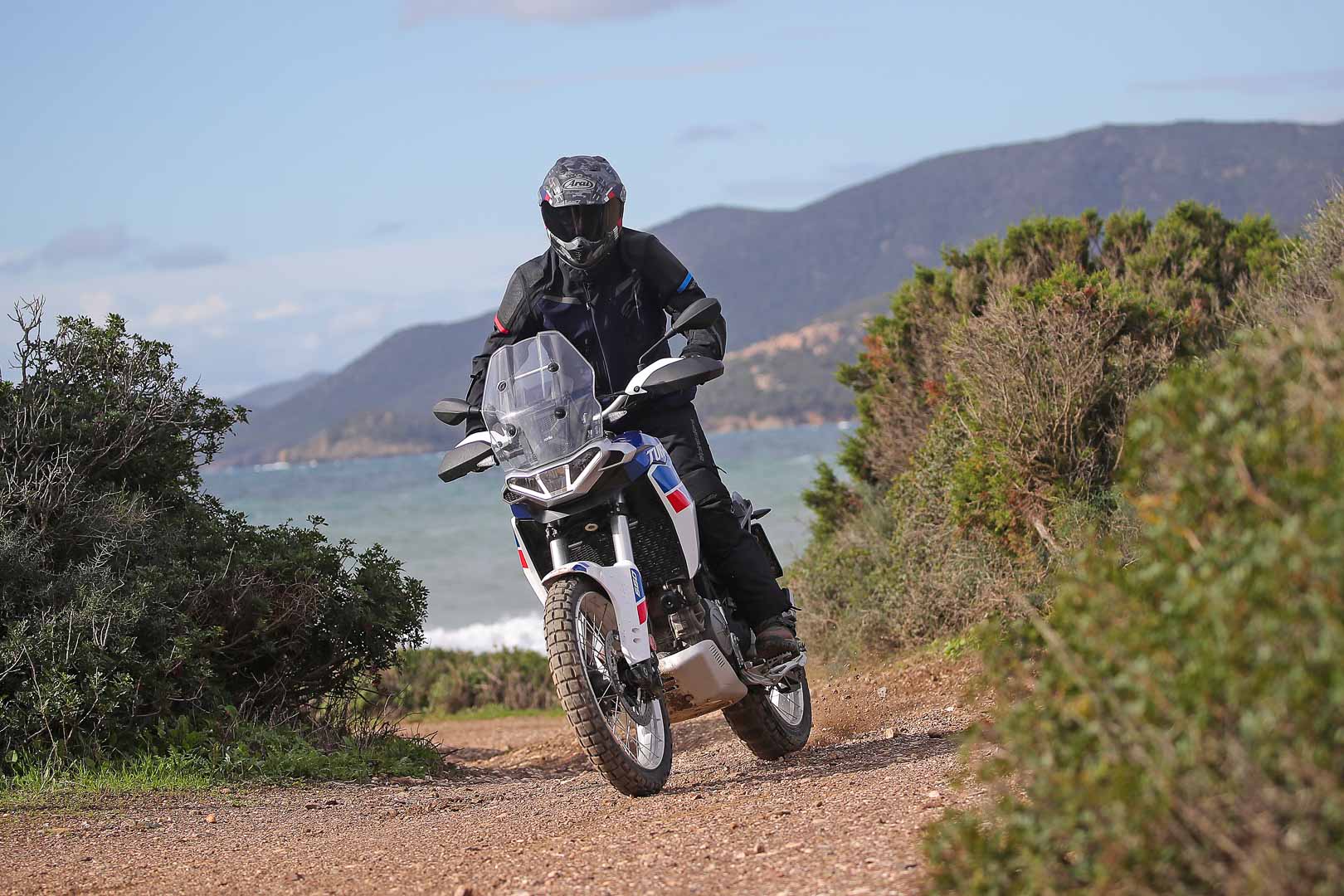 At the touch of a button, I could swap from the soft Urban and energetic Explore modes. However, for tackling the dirt, I wanted Off-Road, which eases the initial throttle crack and disables ABS in the rear (ABS can be disabled completely). There’s also an individual mode to customize as you see fit. Rider aids consist of four-level traction control, three-level engine braking management, three throttle maps, two-level ABS, and cruise control. Oddly, the Off-Road throttle map can be a bit jerky on the street, which summarizes any complaints about fueling.Although an IMU isn’t in play to help keep the MSRP competitive, the package works well on or off the tarmac. ABS never puts up a fight on the street and accommodates hard braking on the trail. Meanwhile, the four TC settings are correctly scaled, with the lowest letting you do a modest Dakar-inspired slide while keeping the power consistent in low-grip conditions. Though, with the engine’s tractability, experienced riders might disable TC altogether. 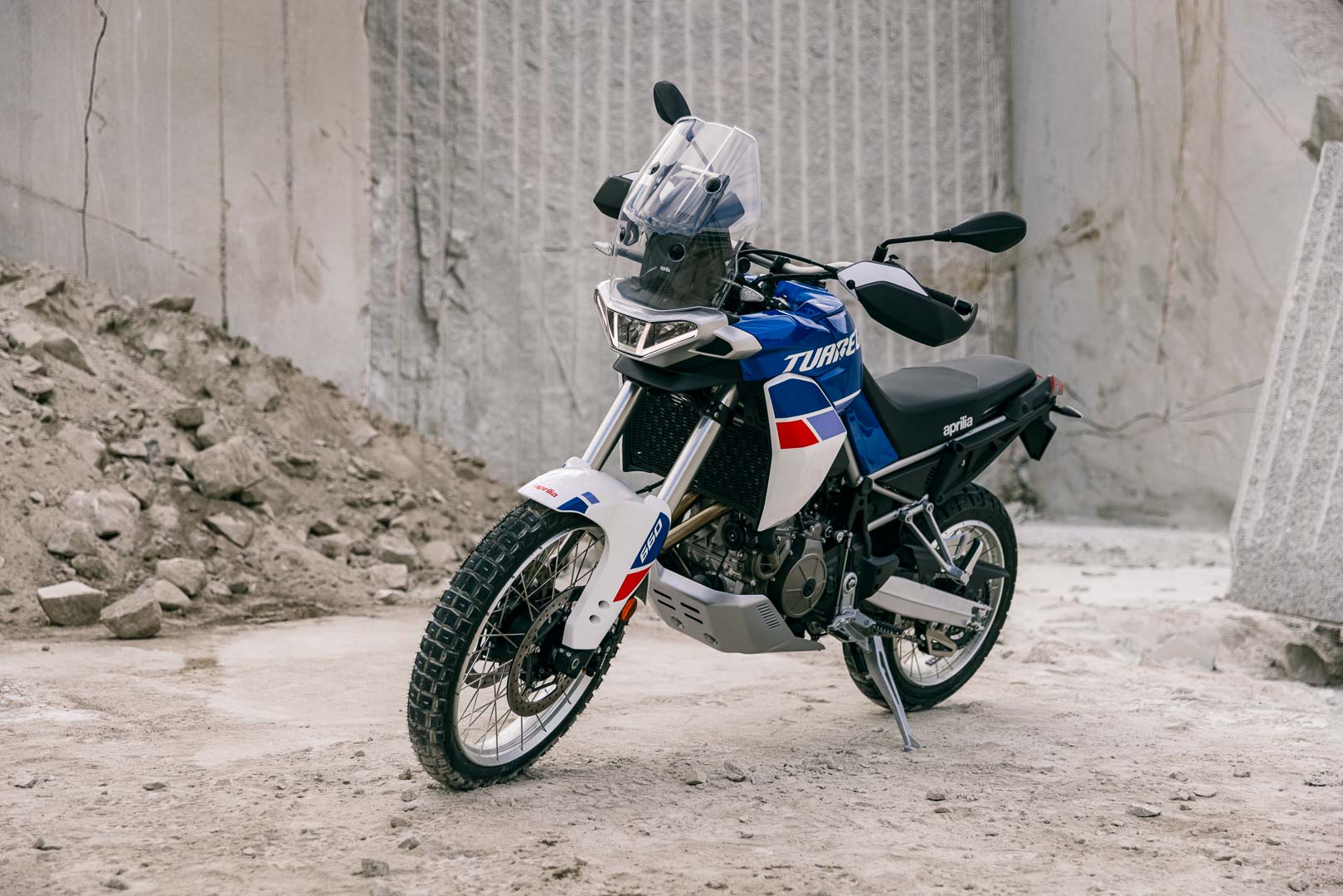 All of those features made dropping the proverbial anchor a less anxiety-inducing event. Engineers saved a few dollars and a few ounces by opting for an axial caliper setup with Brembo equipment. While not as aggressive as some Aprilia street riders might expect, the progressive braking and lack of harsh initial bite are particularly suited for an ADV application, where some might find themselves darting on and off the trail.Mining was once an economic driving force on the island, predating Roman occupation, through the Byzantines, and into the modern era. Miniere de Rosas is a charming revitalized mining community celebrating the island’s past with a museum and several eateries. Over a delectable meal of local pasta, pork, and other fixings, I pondered the importance of the Tuareg’s mass centralization, and my own. 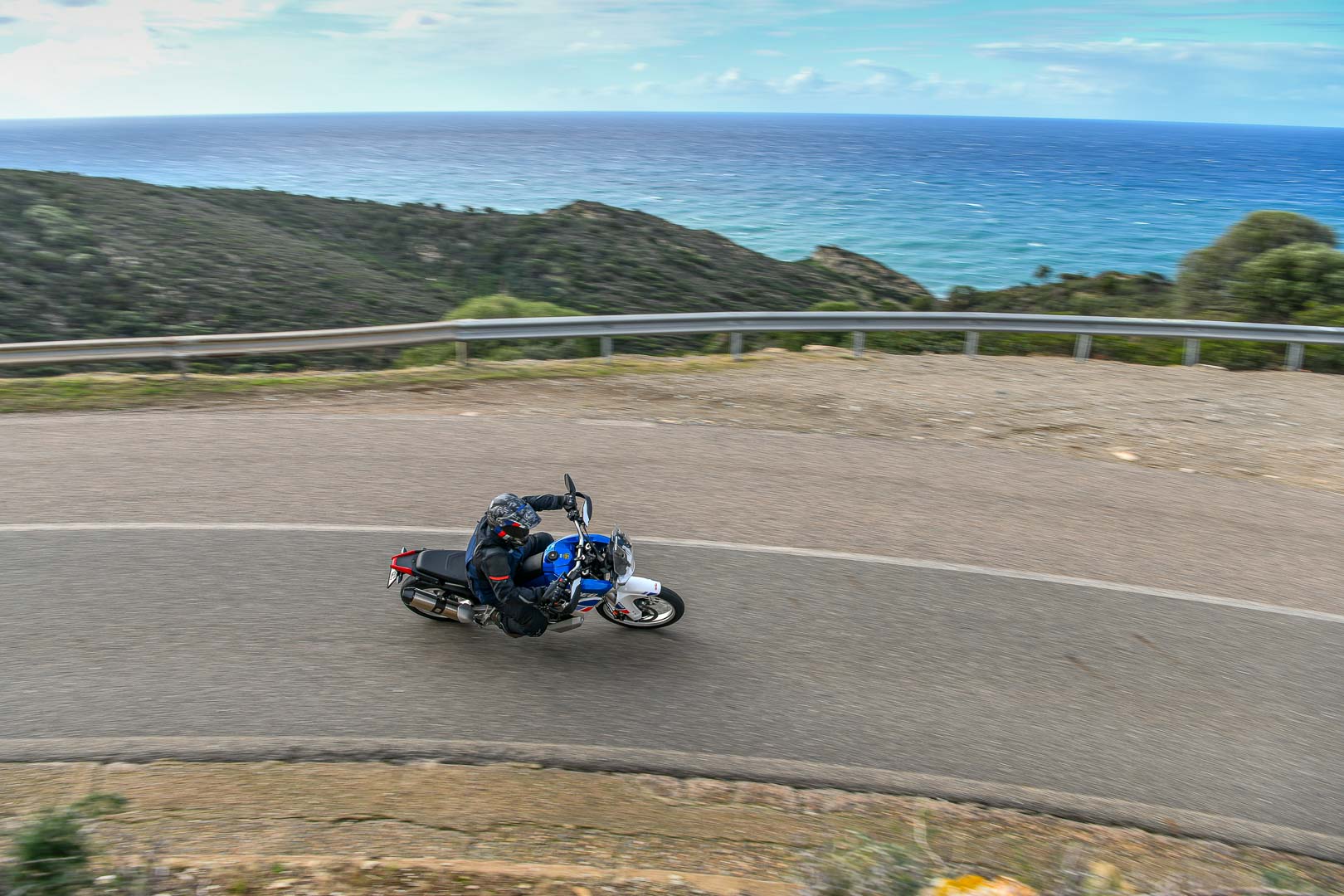 Engineers worked to keep all aspects of the machine compact and balanced. The 659cc engine is rotated 10 degrees reward to reduce yaw. Still, the genuinely beneficial bit is how it distributes its 4.75-gallons of fuel, most of which is tucked away under the seat, helping lower the center of gravity. A few other vital benefits stand out, as the bike isn’t top-heavy like some competitors, and its characteristics remain relatively consistent as fuel is consumed.A full belly, and it was time for me to take to the 33.8-inch saddle, which on paper seems, is on par with its ADV competition. However, the Tuareg edges towards dual-sport width between the knees, and with its plush settings soaking up travel, I was able to get my 32-inch inseam on the deck firm.

Everyday comfort is aplenty aboard this machine, thanks to a wide handlebar and removable rubber-mounted footpegs that dampen most of the engine buzz. Similarly, standing in the saddle was a snap, as the reach to the bars and controls is spot-on for my 5-foot-10-inch frame.Bobbing and weaving through the verdant canyons gave me time to consider the non-adjustable windscreen that provides far more protection than one might expect. Taller riders might need to opt for the more extensive accessory offerings. Cruise control is on point, and the welded subframe accommodates an impressive 463-pound load capacity, also helping meet chassis stiffness goals, much to the chagrin of hardcore off-road riders who would have preferred a removable subframe. 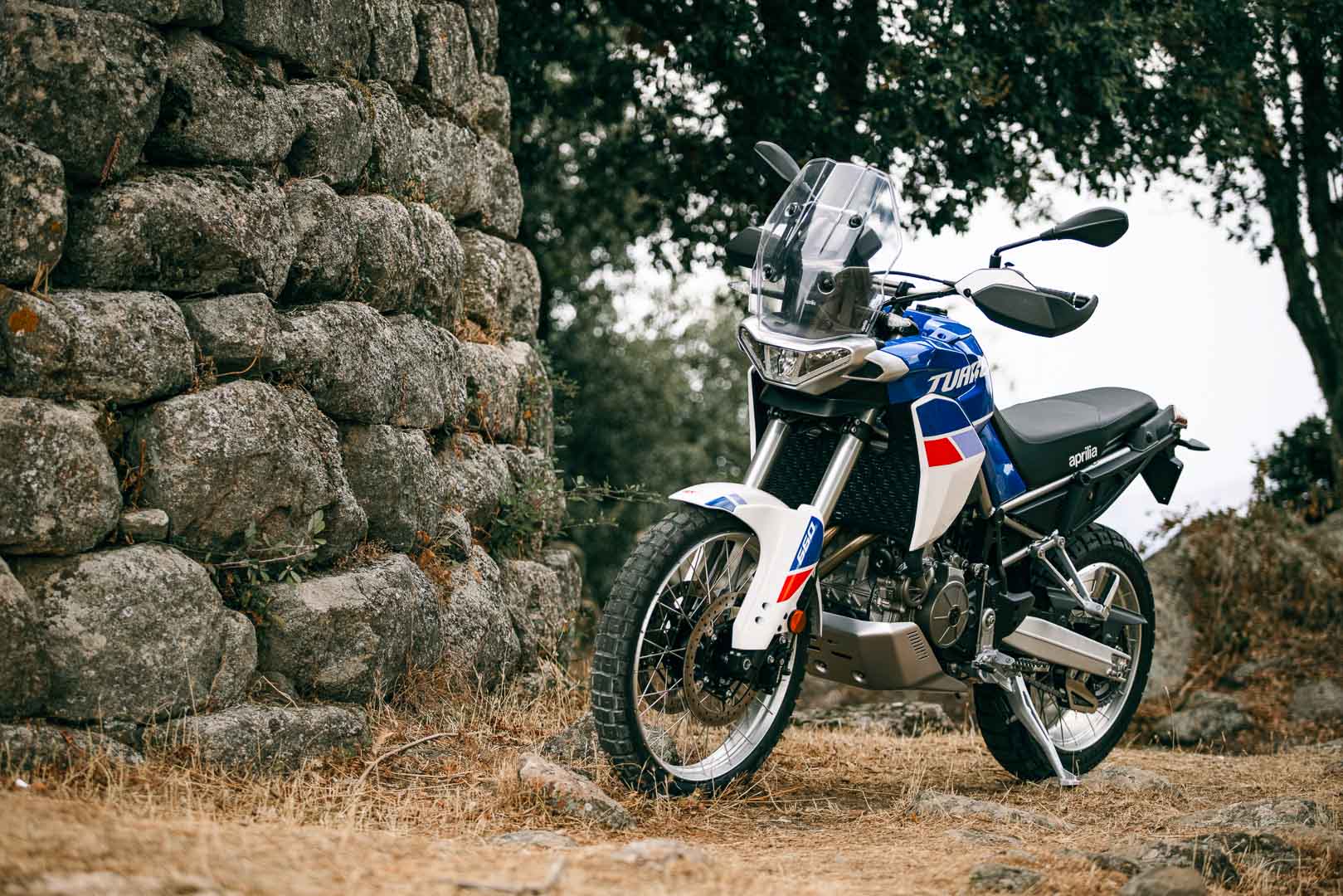 ADV riding is about diversity, and Sardinia offers plenty of it. Jetsetters, snowbirds, and celebrities line the crystal clear beaches or imbibe in its many resorts in the busy season. Though I prefer the solitude and calm of the off-season, the island holds magic in many forms. Under the Sardinian sun, the 2022 Aprilia Tuareg 660 shined as a balanced machine in purpose and function, leaning on its pip of an engine, agile chassis, and off-road capability to deliver me home.Photography by Alberto Cervetti et alNuraghe photo by Jürgen Scheeff on UnsplashRIDING STYLE2022 Aprilia Tuareg 660 Specs ENGINE CHASSISDIMENSIONS and CAPACITIES 2022 Aprilia Tuareg 660 Price: $11,999 MSRP