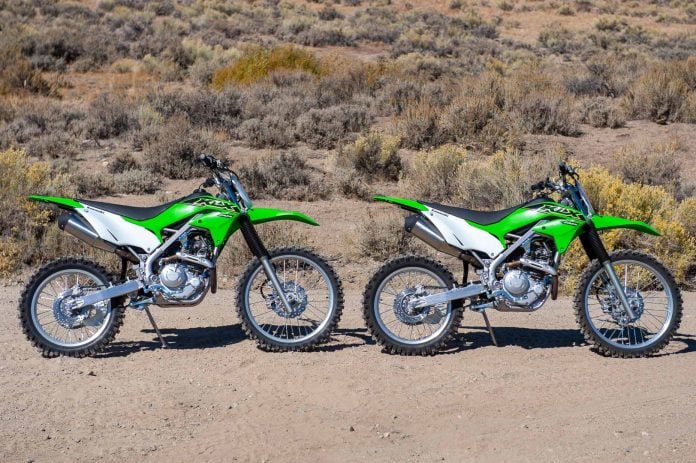 Disclaimer: You’re going to see the phrase “on the other hand” a lot in this comparison of the 2021 Kawasaki KLX230R and KLX230R S. Yep, it’s hard to pick one model over the other as being the ‘right’ bike—even for myself—when two motorcycles are so similar. Read on! 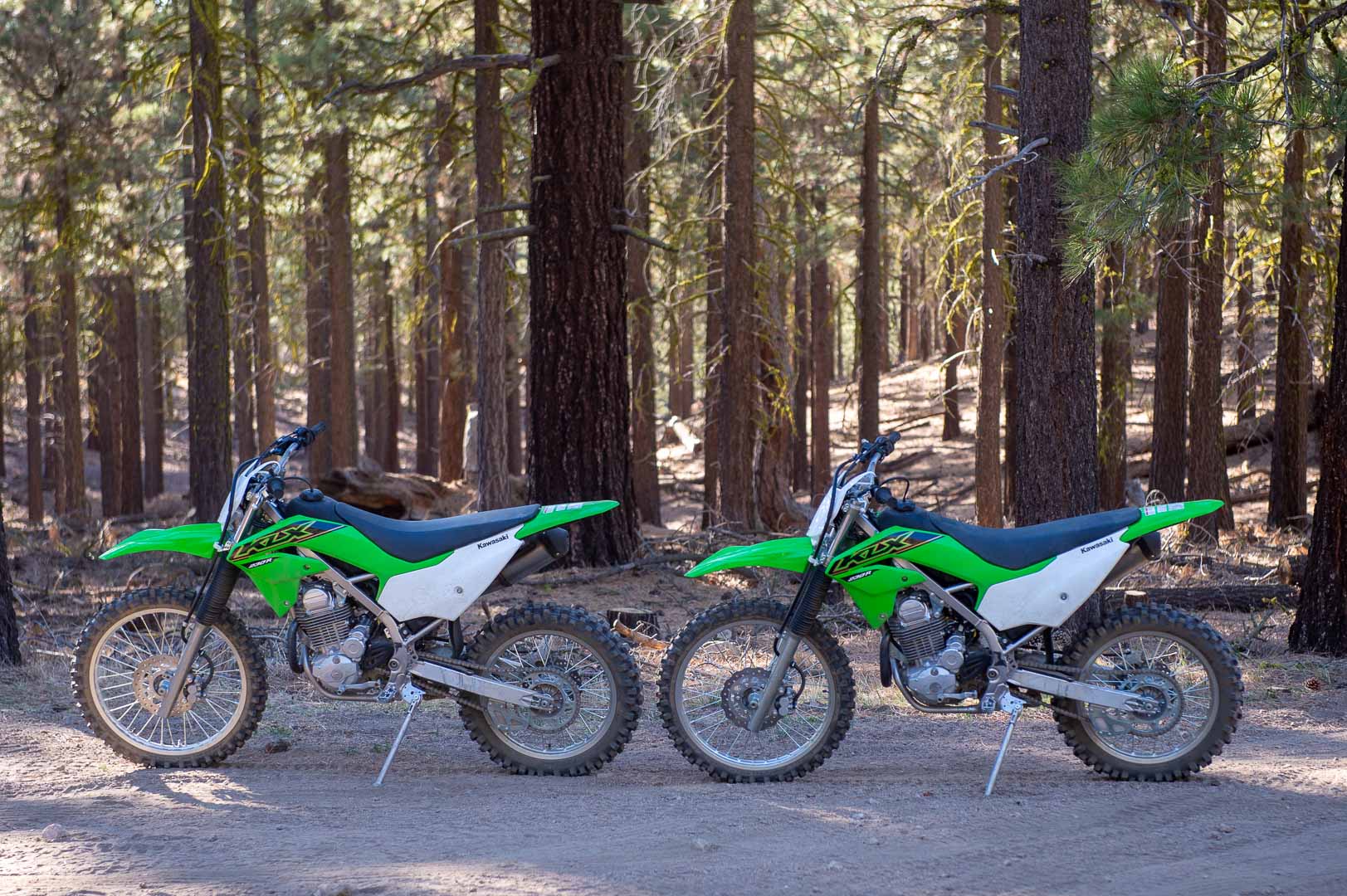 I tested the 2021 Kawasaki KLX230R S previously, spending quality fun time on the trail bike on the challenging single-track trails of the Los Padres National Forest, as well as the wide-open desert terrain of California City. After getting to know the motorcycle well, I was given the assignment to compare it to the standard KLX230R, which I hadn’t ridden yet. The material differences between the R and the R S are shorter suspension travel and a corresponding one-inch lower seat height, though there’s a bit more to it.Having spent countless hours on taller dirt bikes—read my test of the 2021 Yamaha WR250F high-performance trail bike—I’m not entirely out of my comfort zone on them with my 30.5-inch inseam. On the other hand, there’s a direct correlation between how much confidence I have on a bike and how easily the soles of my Alpinestars Tech 7 Enduro boots can touch the ground. How much difference will that inch make on the shorter KLX230R and KLX230R S?While I immediately noticed the one-inch taller 36.4-inch seat height when sitting on the Kawasaki KLX230R—my boot soles no longer just brush the dirt, I am now on the balls of my feet—it wasn’t a big deal. It’s still 1.2 inches lower than the WR250F, and has more sag once I’m aboard, so I am not intimidated. When coming to a stop, I can easily feel the ground on both sides. I’m not on tiptoes, and I feel confidentThe KLX230R and KLX230R S look exactly the same—there is no “S” anywhere on the S. When I recognized the standard KLX230R, I had to deliberately swing my leg higher to smoothly get aboard. If I didn’t, my leg would hit the set, something that didn’t happen on the R S. The only tell-tale visual difference between the two is that the taller standard model leans over a bit more on the kickstand.With the KLX230R’s taller seat height, I gain just over an inch of wheel travel in the front (9.8 vs. 8.7 inches) and back (9.9 vs. 8.8 inches), plus an inch of ground clearance. Kawasaki tells us that the externals of the suspension components are identical, so the shorter travel is obtained through different internals and settings. We couldn’t get any details on the precise changes, so let’s go riding.That extra travel is great when riding through fast, rough, and challenging terrain. Our local mountain trails throw rock gardens and whooped-out trails at us, while high-speed runs across desert expanses have a variety of surprises. 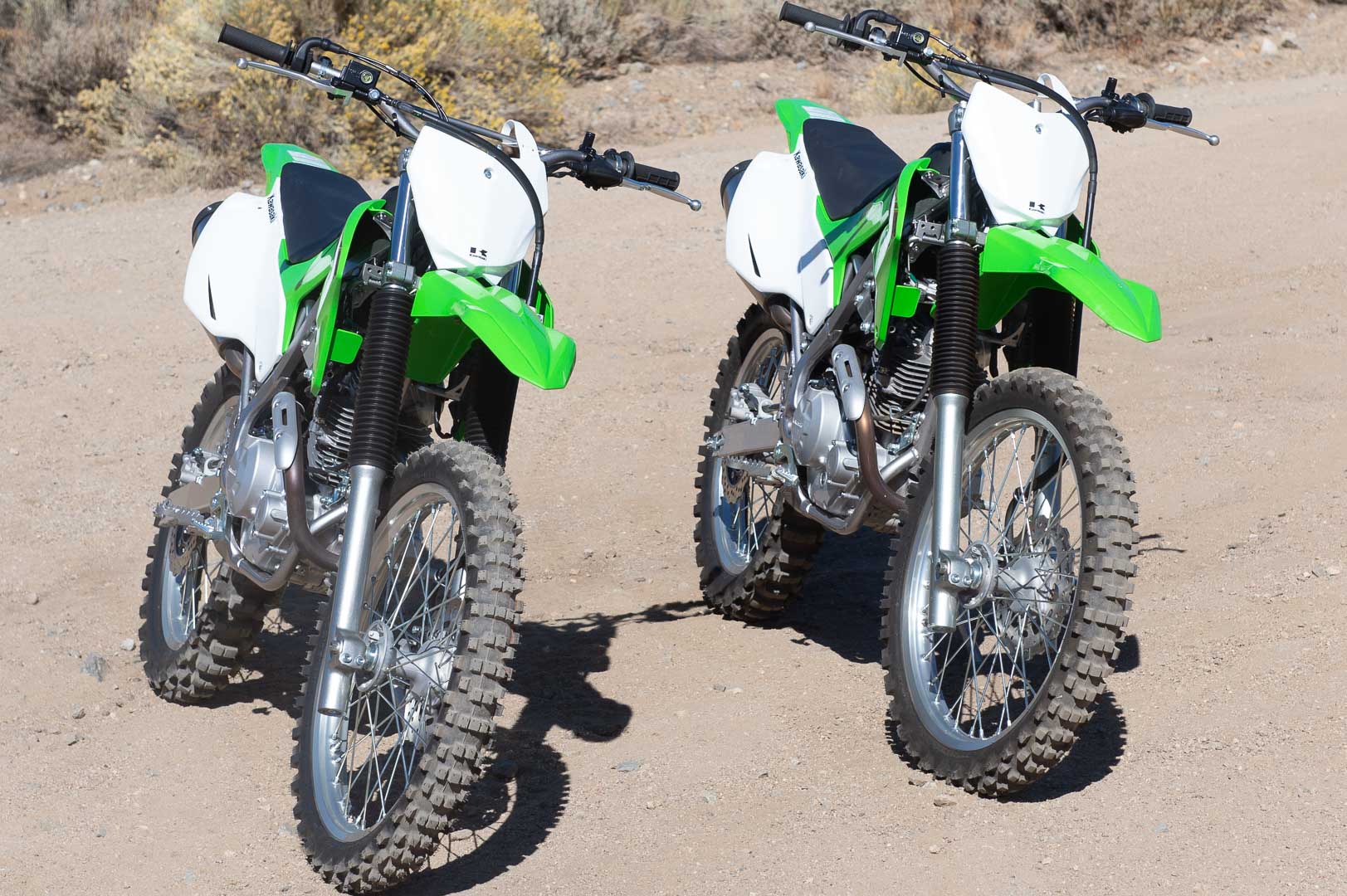 On the other hand…I found myself riding faster on the KLX230R S. Why? The difference in feel between the two bikes is subtle yet unmistakable, the moment you click up a gear or two and really get moving. The first thing that came to my mind was, “It fits me better.” However, the rider triangle on the 230s is identical. So, while I somehow feel more collected and the master of my mount on the R S, the relationship between my hands, feet, and body on the bike has not changed. That tells me it’s mental.If I’m charging down a dirt road in 5th or 6th gear, or aggressively attacking a tricky uphill where I need to keep my momentum up, my feet are on the pegs. That inch difference in the seat height doesn’t make any difference, or does it? Somewhere in the back of my mind is the knowledge that, if I get out of shape, I am farther from the ground on the R. Regardless, the low center of gravity, even on the ‘tall’ 230R, makes a significant difference in handling, and what one is willing to tackle.One interesting spec difference between the two motorcycles suggests it’s not just ‘mental.’ The rake on the R S is almost a degree less than on the R, so the lower bike also has quicker steering. Coupled with the inch-lower seat height, I don’t feel overpowered by the bike in any way, despite them weighing an identical 254 pounds with the 1.7-gallon fuel tanks topped off. Coincidently, that’s also the curb weight of the Yamaha WR250F.Let’s go back to the KLX230R S’s suspension for a minute. In addition to having less travel, the travel is also softer. Likely, Kawasaki engineers assumed that smaller riders will be attracted to the lower seat height and softened the suspension action accordingly. At 115 pounds sans gear, I never bottomed the R S’s suspension out and didn’t feel like it was too soft, so trading the inch in travel and ground clearance is worth it to me.Larger riders will disagree on this point. Our 170-pound test rider, running at about the same speeds as me, said he was constantly bottoming out the R S, especially the rear end on G-outs. Even first-gear whoops on single-track trails bottomed out the suspension for him. That wasn’t the case on the standard KLX230R, which he reports “felt more like a real dirt bike.” He mentioned that the R S’s quicker steering makes it feel like a skateboard on smoother single-track trails, which he liked.So, it’s not just a matter of inseam length to consider when deciding between the standard KLX230R and the shorter KLX230R S. The rider’s weight, ability, and the expected usage all factor in. A heavier rider who will be riding the 230 casually might be just fine on the R S—it depends on how heavy, how casual, and the likely terrain.Because the two Kawasakis are essentially the same, as we traded back and forth during our test rides, we experienced the same pluses and minuses of the KLX230R platform.On the upside, the motor makes the KLX230s exceedingly easy to ride. Power delivery is unrelentingly smooth. The fuel-injected 233cc single will oblige a rider who rolls the throttle on slowly and responds to a quicker twist of the throttle. You have to work hard to get the front end up—which can be viewed as a positive or negative, depending on rider experience—with the geometry of the KLX230R making it easier to loft the front wheel.All the low and mid-range torque from the little thumper is sent to the ground—there’s not much in the way of wheelspin, even with the budget Dunlop Sports D952 tires. The 230 is surprisingly capable and took us up some large hills without roosting drama. When you are on dirt roads, don’t count on steering with your rear wheel—it’s a challenge to spin it up in corners. 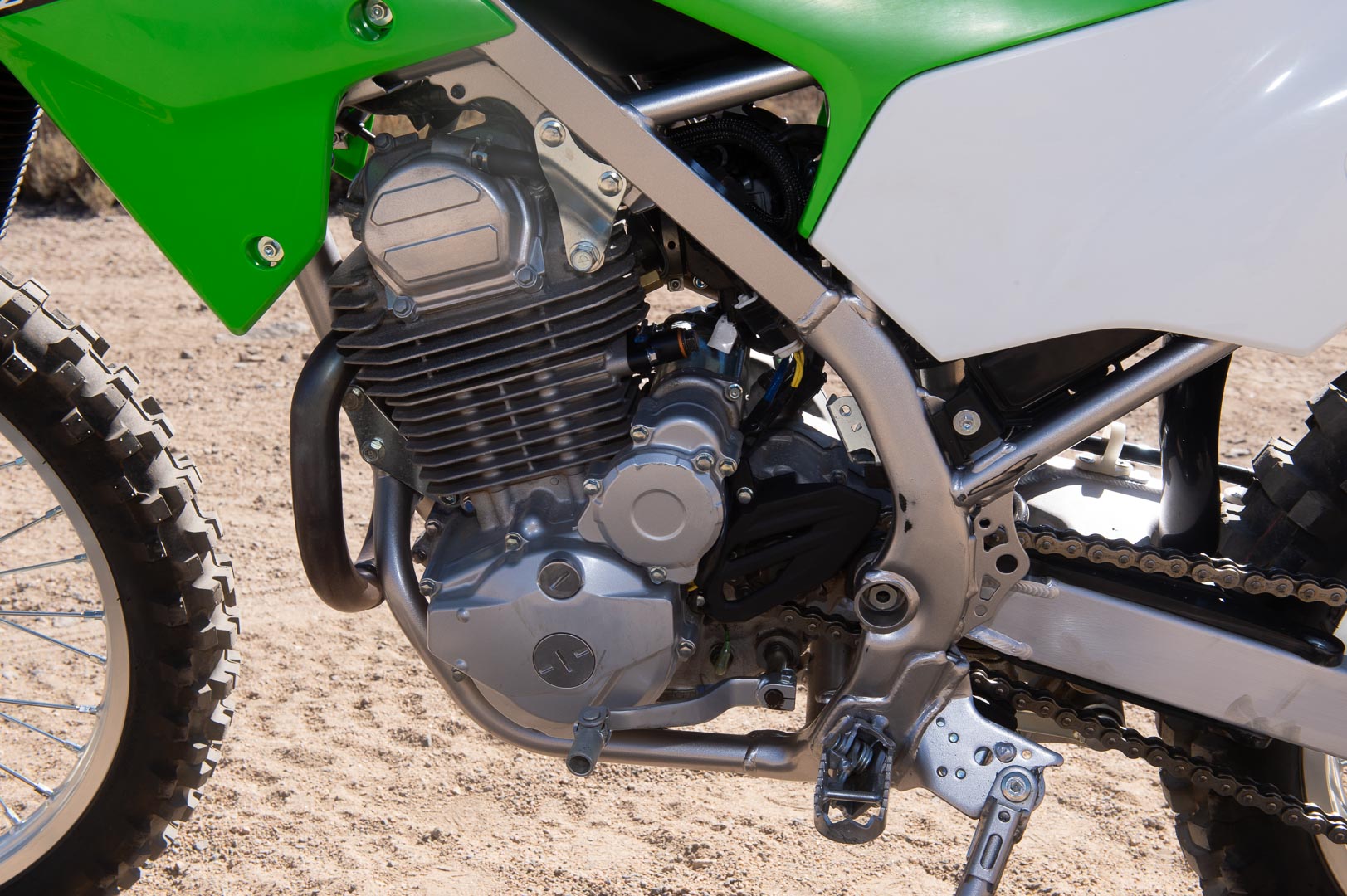 We were disappointed with the KLX230R’s erratic idle—something we don’t expect on an EFI bike. The two-valve, air-cooled motor has a tendency to idle high for stretches of time, and that compromises the use of engine braking on rough downhill trails. A DynoJet Power Commander V will probably fix that, though at the tune of $430.The stock Dunlops contributed to making tricky downhills more challenging; we would swap out for Dunlop Geomax MX53s if the KLXs were living permanently in our garages. Fortunately, the disc brakes are excellent with a soft initial bite and strong power when you can take advantage of it.The KLX230R and R S work well for a variety of riders. They are excellent transition bikes for riders who are growing in both size and skill set, or dropping down from the competition-height dirt bikes with a foot of travel. The R S, in particular, is a perfect back-of-the-motorhome bike. 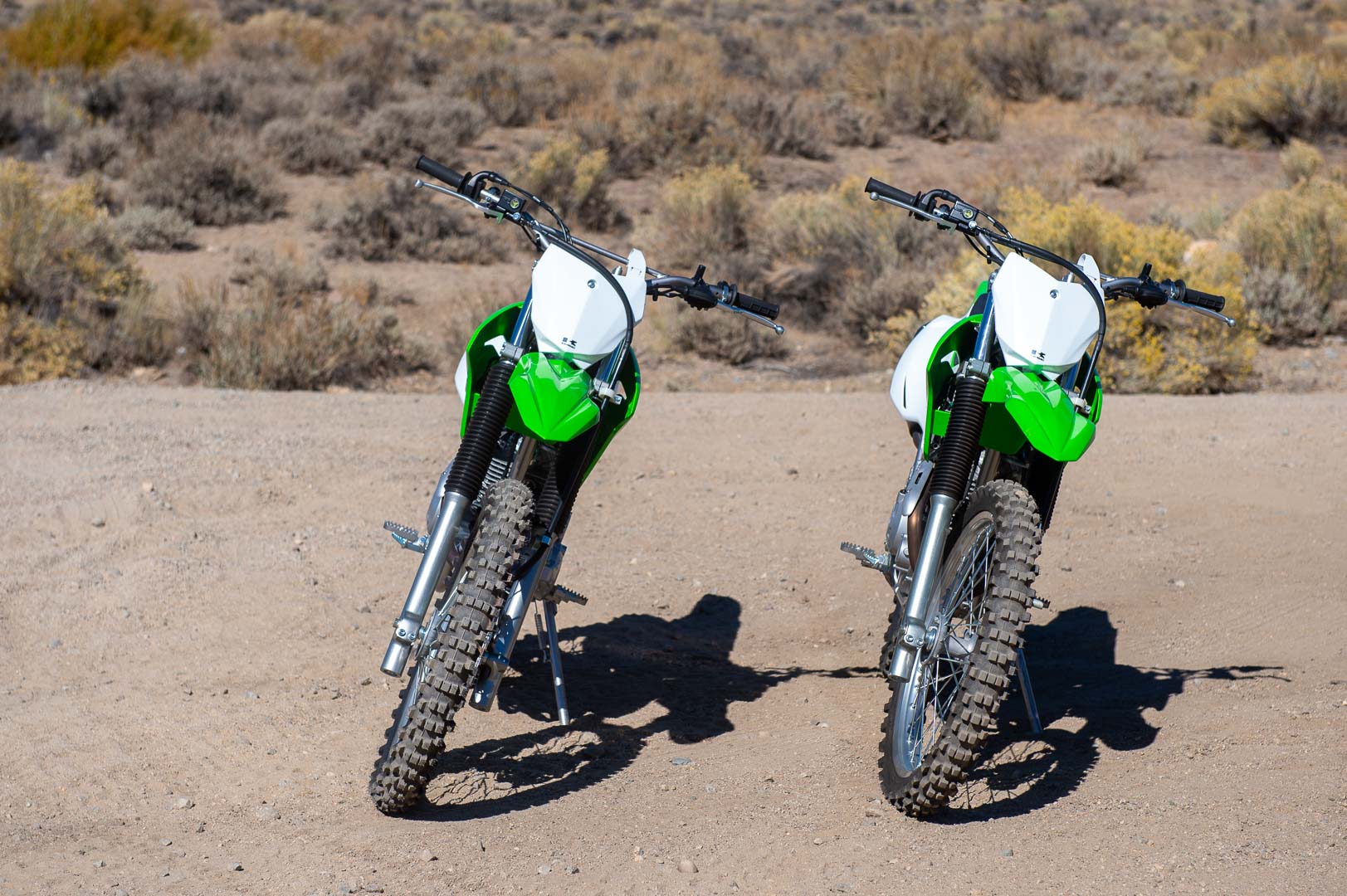 It’s worth noting that the KLX230R S isn’t truly a ‘short’ bike in its class, only in comparison to the KLX230R. The Honda CRF250F’s seat height is 0.6 inches lower than the R S, and the Yamaha TT-R230’s 34.3-inch seat height is over an inch below the R S. In reality, the standard KLX230R is a tall motorcycle in its class, with longer suspension travel and a loftier seat height than the competition—it has the same seat height at the KLX300R.The choice between the 2021 Kawasaki KLX230R and KLX230R S can be reasonably straightforward, or a bit complex. The heavier you are and harder you ride, the more you’ll appreciate the longer, firmer travel of the KLX230R, and the seat height won’t matter if you’re tall. Light riders, shorter pilots, and the less aggressive will find the KLX230R S to be just right. However, if you fit into only one or two of the categories, you’ll have to think carefully when making your choice.Photography by Don WilliamsRIDING STYLE2021 Kawasaki KLX230R (and KLX230R S) SpecsENGINECHASSISDIMENSIONS and CAPACITIES