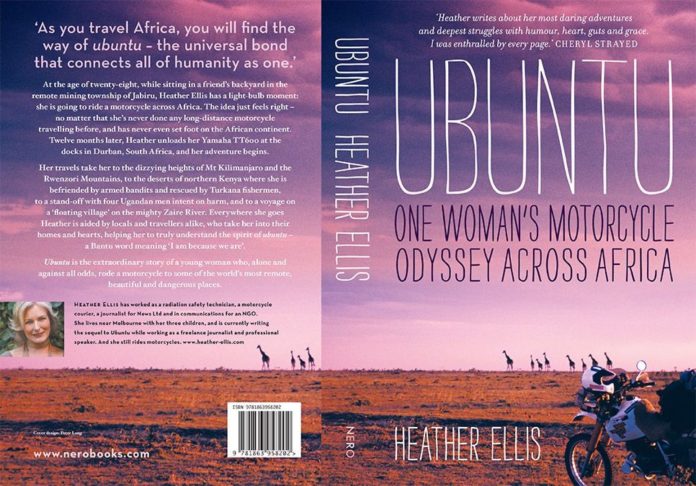 At age 28, Heather Ellis had an epiphany about her future over beers with friends at a barbecue. In that moment of enlightenment, she decided to leave her family, her friends, her job, and all that was safe and familiar in her life to travel the length of the African continent on a motorcycle—alone.Her friends probably thought she must be drunk when she announced it. She was not; she was dead serious. 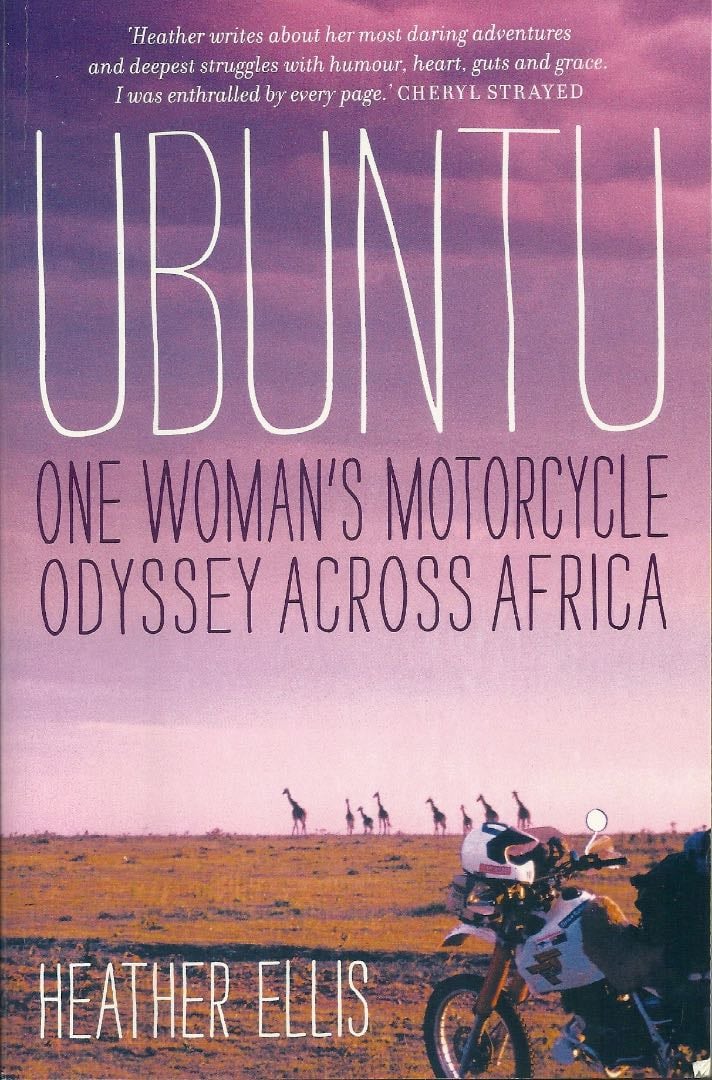 Heather Ellis did it and as the author of the book Ubuntu: One Woman’s Motorcycle Odyssey Across Africa, she tells the incredible, unexpected story.The incredible part is pretty much self-evident. A young woman traveling alone on a motorcycle for thousands of miles across unforgiving, often trackless terrain in all weather, sometimes through war-torn, lawless, hostile territory, with nothing more than what she could pack on her Yamaha TT600, her confidence and her wits.The unexpected part is what she learned about the real Africa and its remarkable people. Early on, she learned about ubuntu. It is a word that captures the true spirit of the African people, no matter what nation they live in. It is the universal bond that connects all of us—all humanity as one. A western expression that may have much the same meaning is “we’re all in this together.”It may seem a naïve notion to have faith in the intrinsic goodness of people in a world where so much of the news we hear is about greed, violence, self-interest and pain. Yet, Ellis manages to displace her fear and trepidation about her journey with a firm belief in ubuntu.Against all that she thought she knew before she traveled through Africa, she found again and again in her journey that the kindness of strangers far outweighed the danger they posed.When situations in the middle of nowhere seemed to put her at greatest risk far from any help; more than once, local people—be they kids or elders—seemed to materialize. Rather than trying to take advantage, they would often just pitch in and help, accepting nothing in return. Of course, that isn’t to say there was never demand for cash or goods in payment, but even then, the cost was able to be kept in Ellis’s limited budget.To be sure, there were some very dangerous situations. But even in those, by her own grit and wit or the intervention of people she did not even know, those situations were handled safely. The flow of such events had a powerful influence on Ellis:“Alone, I had no distractions to mask the growing influence of my intuition, which told me unequivocally that I was surrounded by a hidden energy as real as the radiation levels I had once monitored at the uranium mine in Kakadu.“Solitude also gave me time to think about the coincidences and chance encounters that had been occurring with ever-increasing regularity the further I travelled. Since surviving Lake Turkana, when help had miraculously arrived to carry Sharif and me to safety, I no longer worried about the next hour, day, week or month. To be completely devoid of worry was liberating. I had been set free to drift where circumstance, combined with my own gut feeling directed me.”On top of the hazards that quickly come to mind on such an odyssey, Ellis also had to fight off serious illnesses including recurrent bouts of dysentery and malaria. Unbowed, she kept going and reached her goal at the top of the continent. From there, she and her Yamaha boarded a ship for England. As her African adventure ended, she looked back on it:“Africa and its people had looked out for me. I had only ever experienced their kindness and hospitality; even those who may have intended harm did not hurt me. Africa had shown me ubuntu.”But even as that chapter of her life had closed, an even more harrowing and deeply personal chapter was about to begin. In September 1995, while in London, she was diagnosed with HIV. Given but five years to live, Ellis made some crucial, life-affirming decisions: she would tell the story of her African odyssey in her book, Ubuntu, and she would forge ahead, try to complete the rest of her motorcycle journey overland across Russia and Asia back to Australia and live life to its fullest.The story of her long journey home is told in her latest book, Timeless on the Silk Road-an Odyssey from London to Hanoi. Keep it here with Ultimate Motorcycling for our review of that book coming soon.Book Data:Ubuntu is available at: