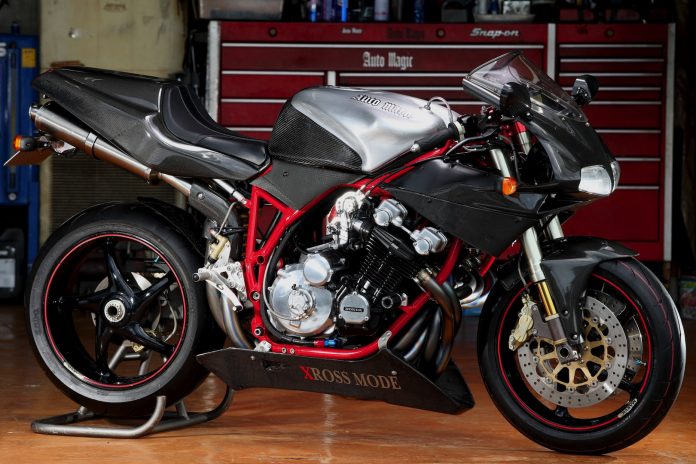 Passion is at the heart of a successful custom motorcycle. A desire burning inside the creator can fuel that passion, or the power of suggestion can ignite it. In the case of this astounding custom motorcycle from Japan with a Honda CBX motor mated to a Ducati 748R chassis, AutoMagic’s Misao Araki it started with a customer requesting a custom build of a 1982 Honda CBX.AutoMagic operates out of a nondescript industrial space in Chiba, about 45 minutes east of Tokyo. The shop fronts a busy highway, between a pet store and a noodle shop. It is there that Araki creates his magic. 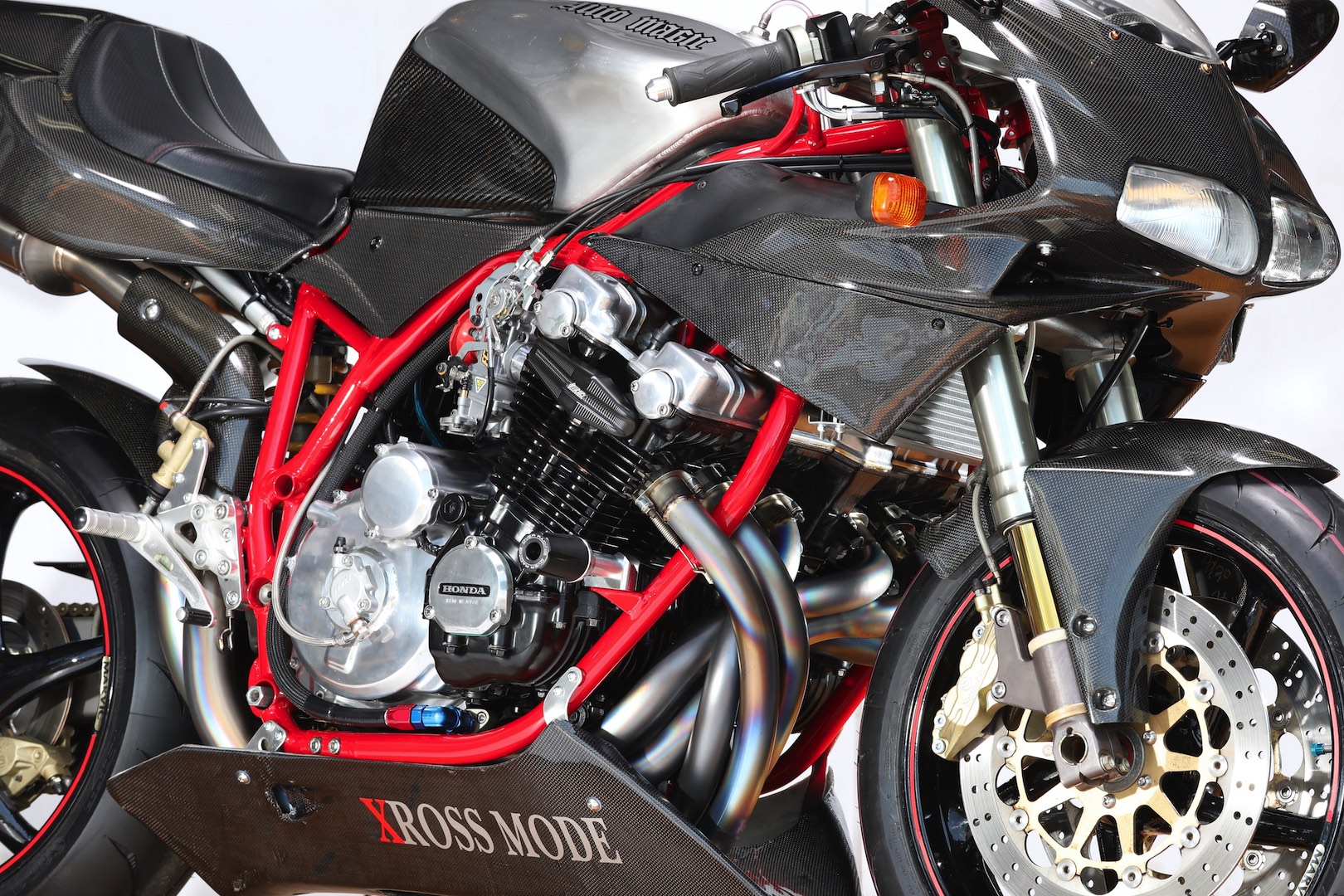 Difficulty in attaching an inverted fork and single-sided swingarm to the CBX chassis led Araki to make a startling suggestion to the customer—use a 2001 Ducati 748R as a chassis, as it already had the desired suspension designs and Showa units. The result—a Ducati CBX (the build has no official name).Ideas are one thing—execution is another. “The position was important when swapping the CBX 1000 six-cylinder engine,” Araki tells us in a staggering understatement. “In order to set the engine in the proper position, it was necessary to devise modifying and production of the frame. The engine and front wheel are close. Therefore, it was necessary to make a special muffler, but I am good at hand bending muffler and frame production. There is no shop that can cure a bent frame properly. AutoMagic is a pioneer in the field of frame measurement and correction.”Fantastic touches abound. The exhaust is genuinely a work of art, yet the Nissan and Brembo hydraulics mated to the clutch deserve attention. Unexpectedly, Mitas Sport Force tires are mounted on Marvic wheels. The red velocity stacks on the six carburetors are not to be missed, and the carbon fiber stands out defiantly. 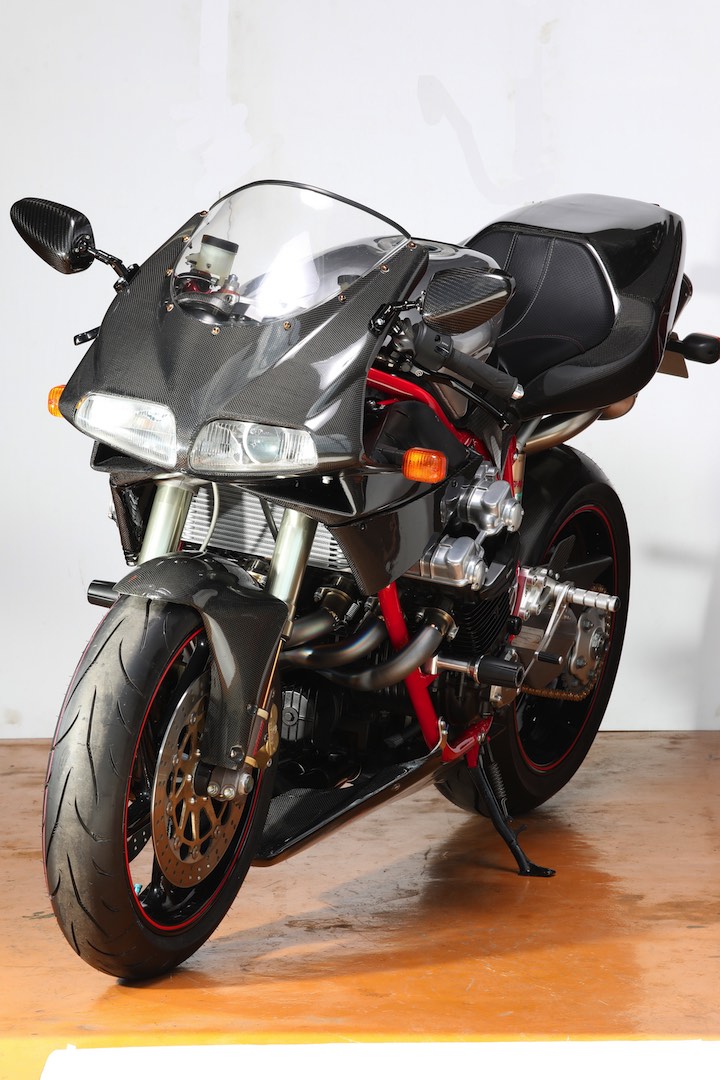 “If it is wet carbon, I will make it myself. I cannot do dry carbon,” Araki admits. “I can do frame work—measurement, bending, and production. I can do simple painting, too.”The resulting motorcycle is as striking as it is audacious. It is very much a reflection of the temperament of Araki. He has strong opinions, and willingly shares them with us.“I want to customize each motorcycle to each person’s body,” Araki explains. “It is AutoMagic that likes to blend old and new things, and create hybrid vehicles. I am chasing that ideal.”It was not easy getting AutoMagic started. In 1988 when the company was founded, Japanese laws made customizing a difficult task. Araki fought the bureaucratic culture alone. “In Japan, regulations are strict,” Araki tells us.“There were times when custom-made was not acceptable. It was a penalty for custom. At that time, no one was doing what AutoMagic was doing, and applying for accreditation. I got permission for remodeling. Brakes, wheels, handles, steps—one by one. I am a pioneer of such a business. After that, custom started to be a business in Japan. I am now troubled that there are many shops that copy and imitate AutoMagic.” 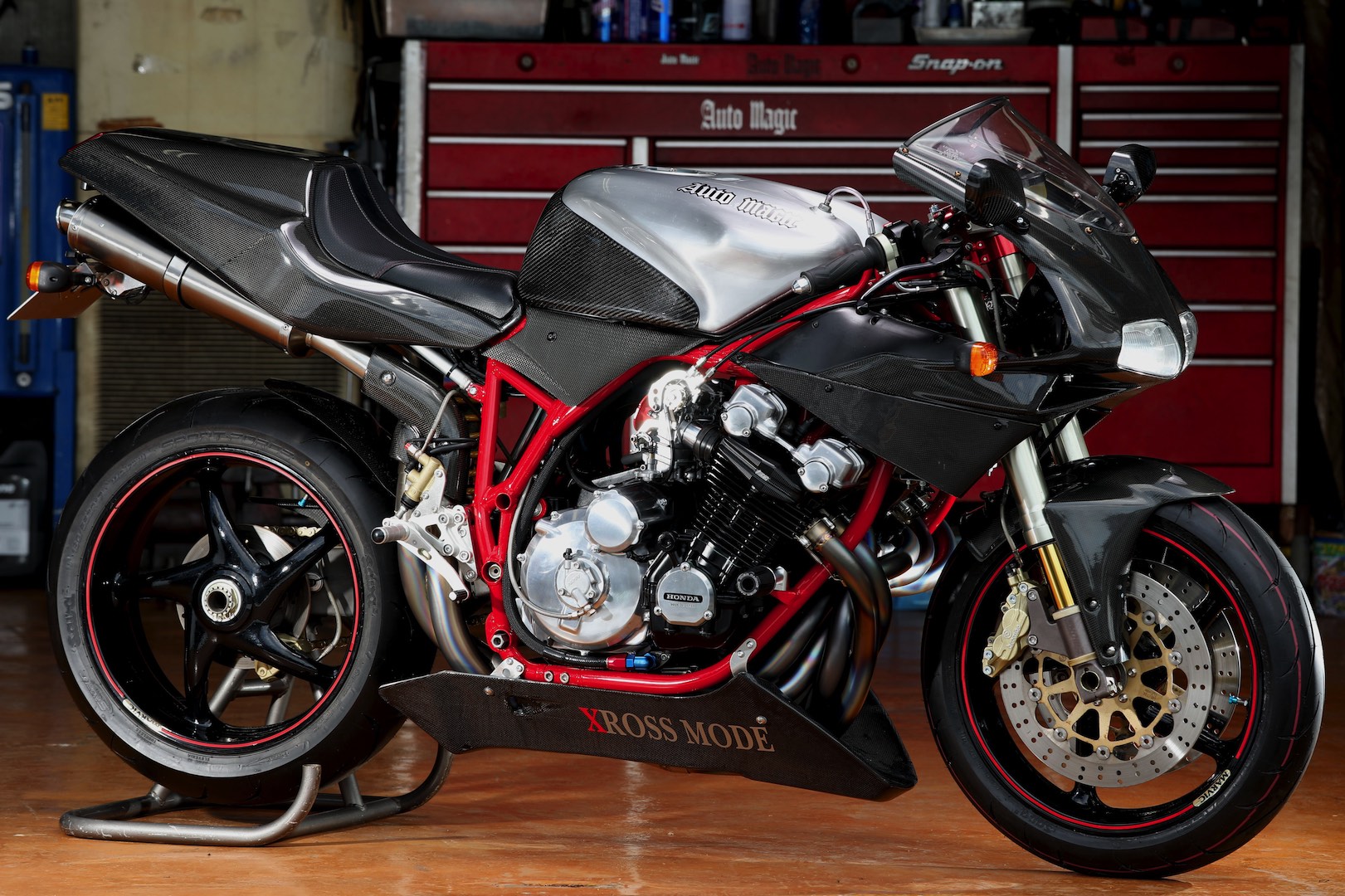 “Japan’s culture of custom is still immature,” Araki believes. “You are criticized for unusual customs. In Japan, there is little novelty, originality, and newness in custom builders. It is a monoculture with just the same custom. There are a lot of custom bikes that are set-up to be ordered as a kit. In Japan, at least, AutoMagic is along making innovative custom bikes. I am creating handmade custom bikes.”In previous times—AutoMagic produced as many as 60 custom motorcycles in a year. Now, Araki also can focus on one motorcycle at a time for a dedicated customer. The result is a handmade custom such as the Ducati CBX.Next, someone would like a Ducati Panigale with a turbocharged Honda CBX motor. “The hopes and delusions of the customers,” Araki says, “it is our job to embody. AutoMagic gathers work that custom shops all over Japan say are difficult customs that cannot be done.”The passion of AutoMagic’s Misao Araki is undeniable, and the custom world is better for it.