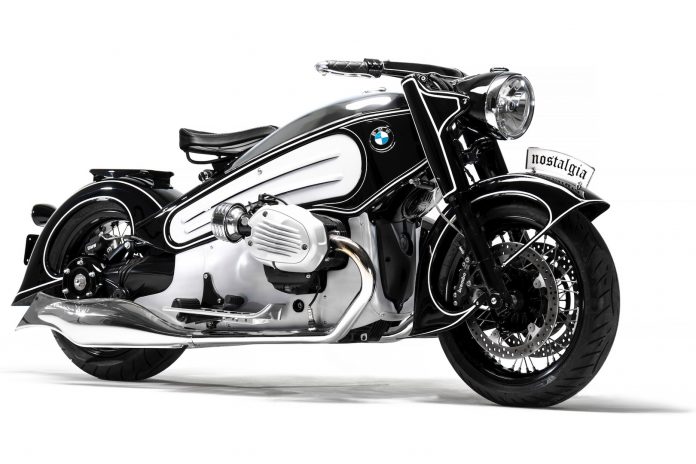 Few motorcycles are as revered or mysterious as the BMW R7 of the 1930s. The designer of the Art Deco motorcycle is unknown, and it was never shown publicly, save a single magazine photo in 1936. As with many concept and prototype vehicles, the R7 did not see production. Instead, it collected dust in a BMW basement as it fell into disrepair.In 2005, Hans Keckeisen started a years-long restoration and reconstruction for the BMW Museum in Munich. Once in viewable (and running!) condition, the R7 went on tour, earning it adoring fans around the globe. 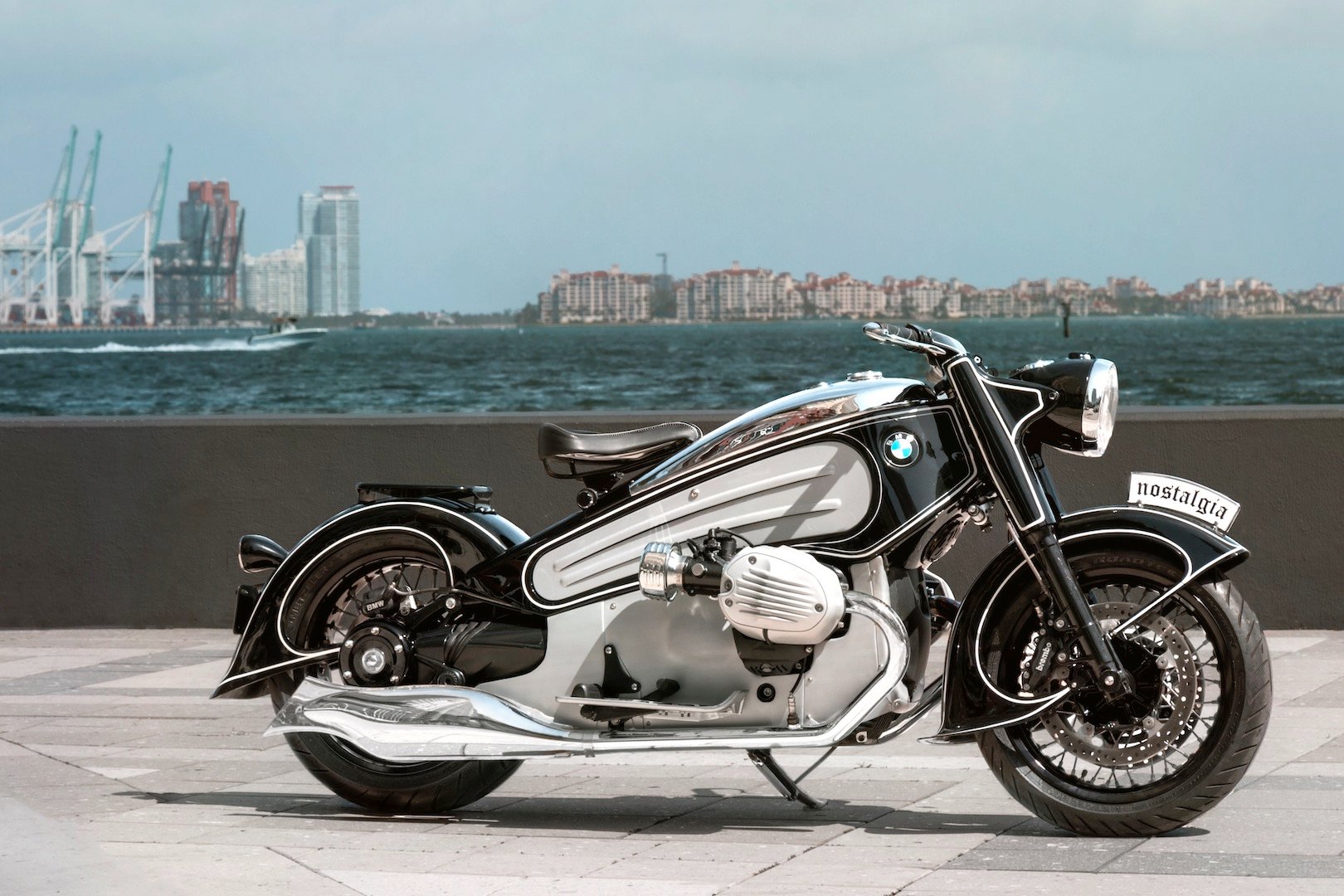 One of the people who viewed it and came away with divine inspiration was Alex Niznik. “I was lucky enough to be present for unveiling on the restored 1934 R7 at Pebble Beach in 2012,” Niznik recalls. “Being so close to a piece of history which never reached its full potential gave me direction. There and then, I fell in love with the motorcycle, and made a promise to myself that when I retire in 2015 at the age of 55, I will look into building a motorcycle like that. Finally, I founded Nmoto and began developing the Nostalgia Project to capture that same innovation and breathe new life into a vintage design.”When it came time for Niznik and Nmoto to bring the Nostalgia Project to fruition, BMW had produced the ideal platform as a springboard. “In the search for the perfect base, our engineers compared all existing BMW models and R nineT was the perfect size for our project,” Niznik explains.“In creating the Nostalgia motorcycle, we wanted to do things right. Our goal was to develop a bike that combined vintage aesthetics with modern technology. We gathered the necessary tools and team to take it from concept to reality.“Our team is experienced metal shapers, engineers, and designers, under the leadership of Stanislav Pavlov—a seasoned designer and metal shaper who worked with famous builders like Jimmy Shine and John Beck—as we sought the best of the best. We wanted something which was more than just a pretty collection piece—a motorcycle that you can actually ride comfortably on a daily basis.” 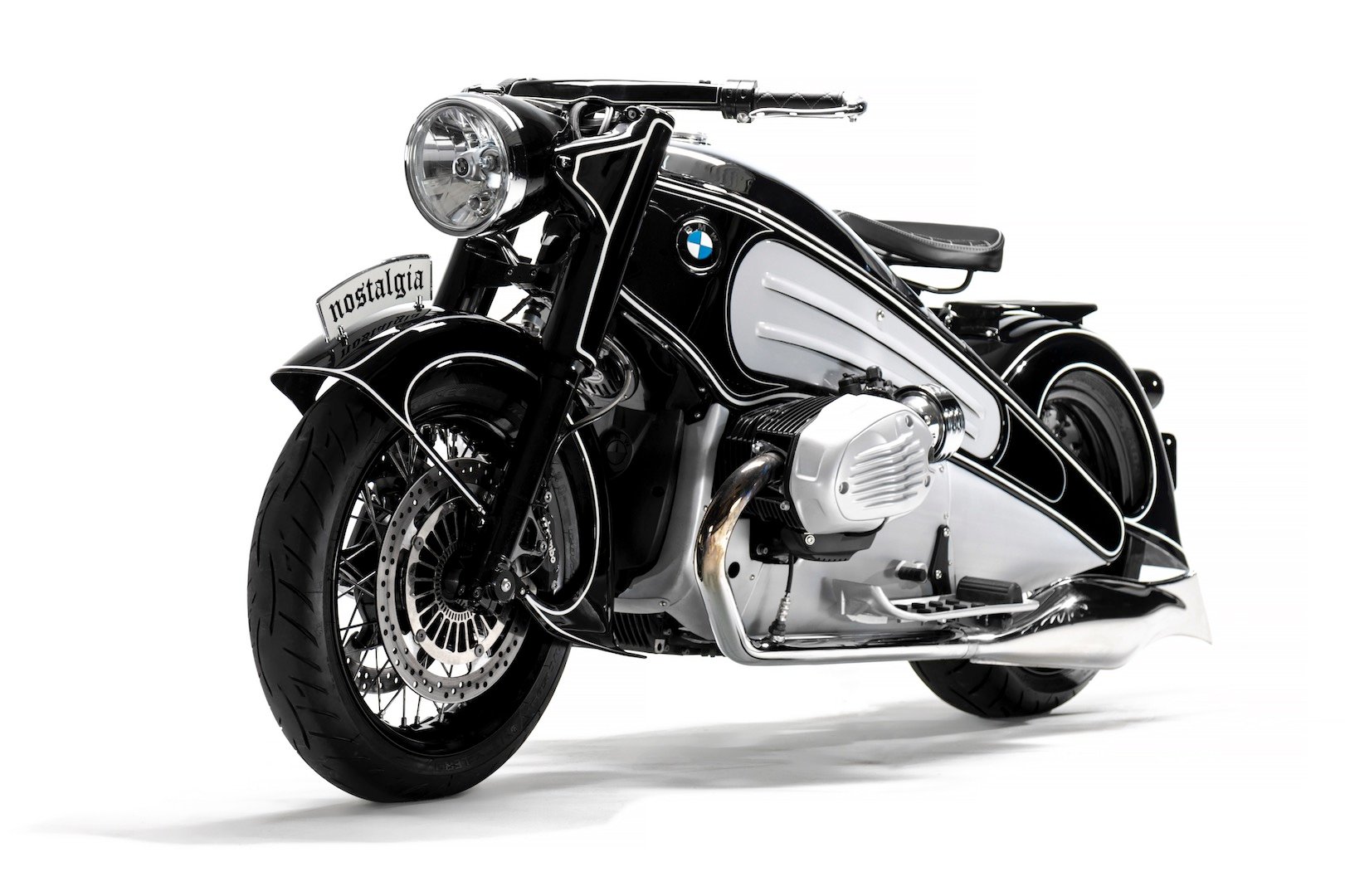 Rather than building a single motorcycle inspired by the R7, Nmoto has created a limited production motorcycle that is available for sale to order. That motorcycle is the Nmoto Nostalgia.Nmoto starts with a stock BMW R nineT and turns it into a mouthwatering masterpiece with an approachable base price tag of $49,500—considerably less expensive than a BMW HP4 Race.“As the original idea to keep using original powertrain of BMW R nineT, we didn’t do any changes or modifications with factory powertrain,” according to Niznik. “BMW created a great motorcycle for the world of custom builds—all parts are bolt-on, and we used original points to fasten the body to the frame. For the rear fender, we created a special rod, as the stock rear fender on BMW R nineT is connected to seat. Only the rear subframe was modified to make final design of Nostalgia as it was on BMW R7.”Sticklers will note that the R7 was a hardtail motorcycle, while the Nmoto Nostalgia has rear suspension— an entirely acceptable compromise when building a motorcycle that is meant to be ridden, as well as admired.“Nostalgia is not just a one-off custom motorcycle, it’s a production motorcycle for lovers of R7 to own history and where traditional old-fashion metal shaping is presented,” Niznik notes proudly. 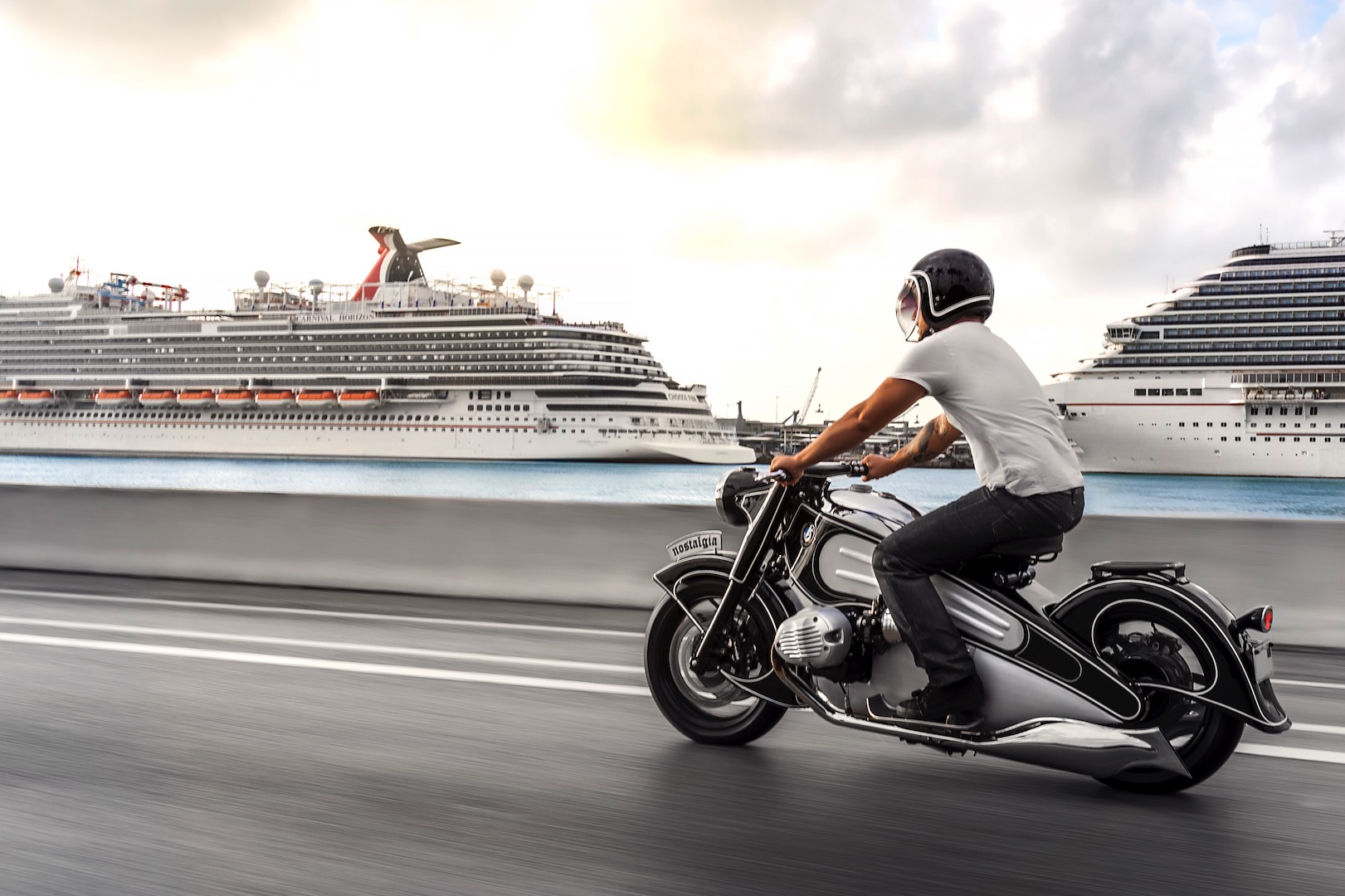 “We are using different CNC machinery for milling, laser works, and engraving. Nostalgia consists of 96 handcrafted pieces. That includes about 74 parts built by Nmoto, including a new gas tank, throttle system, fenders mounts, brackets, and wires.“Fabrication of full aluminum body requires knowledge and skills. Aluminum is not a simple material to work with. There is almost no chance for mistakes or you will start again from the beginning. We want to represent old-fashion metal shaping, as well as CNC machinery. Each Nostalgia motorcycle has its own hand-built body—no stamps at all. Everything is handmade through wood frame, as it should be, using English Wheel and Power Hammer.”Underneath the Nmoto Nostalgia is everything that is appealing about a BMW R nineT, as well as performance that far exceeds the R7. The exhaust system was not compromised, and none of the motor parts are modified, so the Nostalgia is street legal. However, as you would expect, the Nmoto Nostalgia does not retain the R nineT’s factory warranty. Nmoto is hoping to remedy that in the future.Ergonomically, the Nmoto Nostalgia has a lower seat than the R nineT. However, the Nostalgia’s standard 31-inch seat height is adjustable fore and aft, as well as for height. 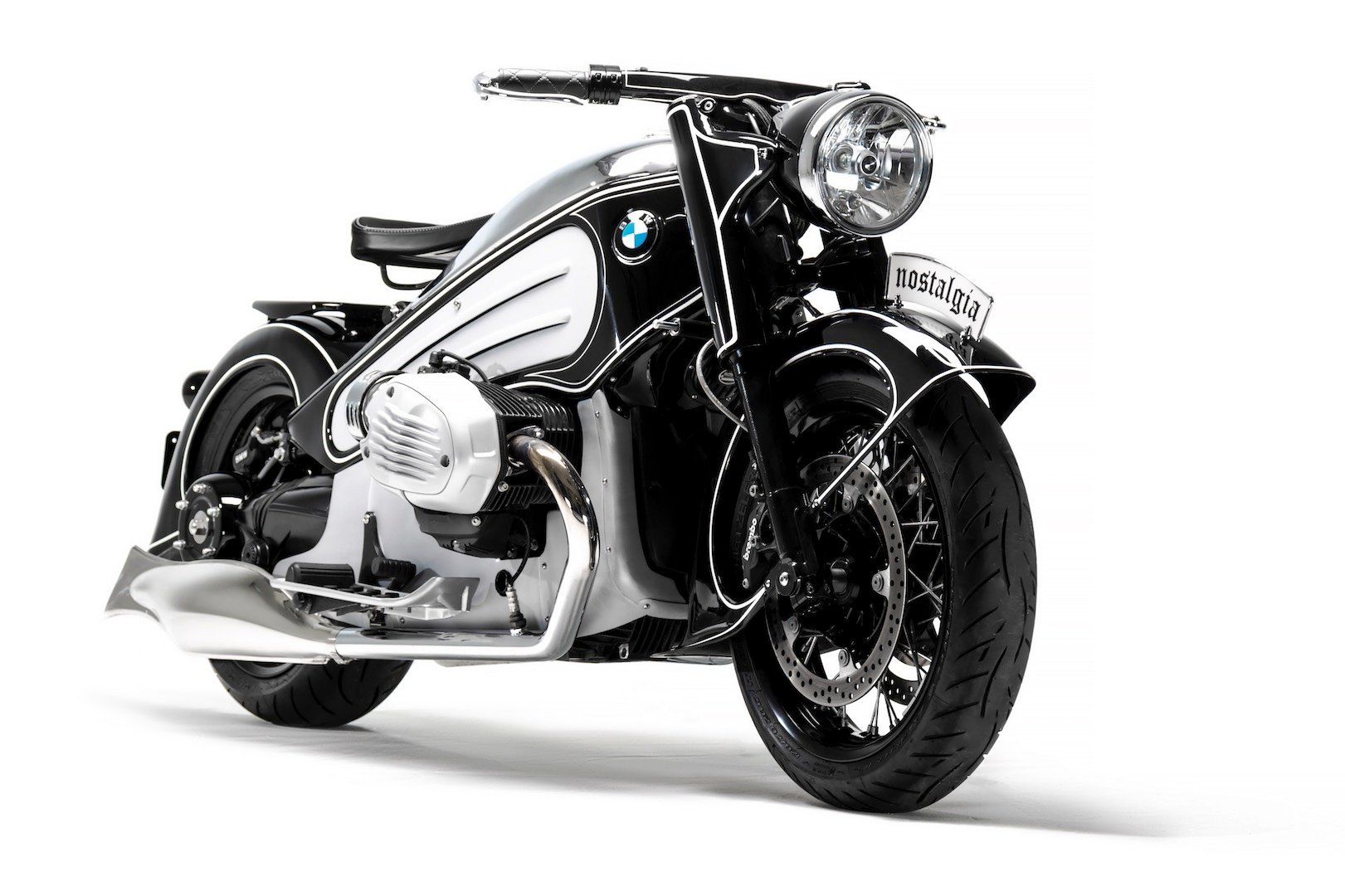 The Nmoto can be customized to the customer’s taste, including different paint schemes, as well as choices in seating and footrests. More esoteric personalization can run to the automotive style shifting that the R7 used, as well as passenger accommodations.Niznik describes Nostalgia’s riding position as “more of a café racer” than the standard R nineT’s upright ergonomics. Top speed is a claimed 140 mph, and thoroughly modern features such as traction control, ABS, and keyless ignition are carried over from the R nineT. As a bonus of the reimagining of the R nineT, Nmoto claims that Nostalgia is 37 pounds lighter than the R nineT.The Nmoto Nostalgia is a beguiling combination of Art Deco sensibilities and contemporary technology. Perhaps the most challenging aspect of purchasing this motorcycle is the wait time of up to six months after ordering.