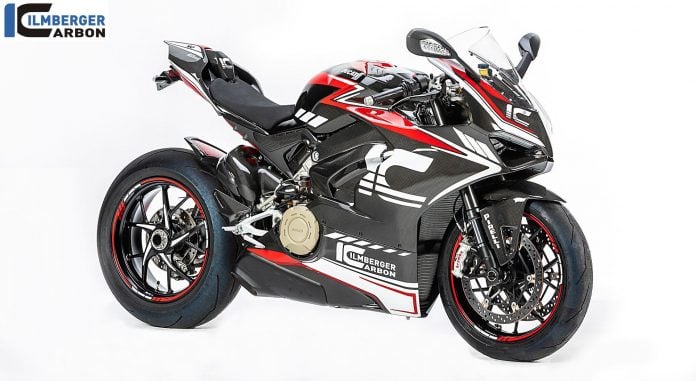 Since founded in Germany in 1990 by motorcycle racer Julius Ilmberger, Ilmberger Carbon has become the go-to destination for premium motorcycle brands when they want the ultimate in carbon fiber parts on their special edition offerings.

When BMW Motorrad created their $78,000 HP4 Race, which we tested at Circuit of the Americas, Ilmberger was commissioned to create the all-carbon body panels.

The bike was launched at Intermot to showcase Ilmberger’s latest carbon fiber pieces. And it was too handsome to not show off.To achieve such high quality, Ilmberger uses superior autoclave carbon process with highest standard in prepreg weaving. This process creates the lightest and toughest carbon fiber pieces that are UV resistant. All parts are TUV and ABE approved and are environmentally friendly.Ilmberger also provides carbon fiber parts direct to riders and whether they order one part or an entire carbon bike package they are shipped to the US with free Fedex shipping.For additional information, visit www.Ilmberger-Carbon.com.