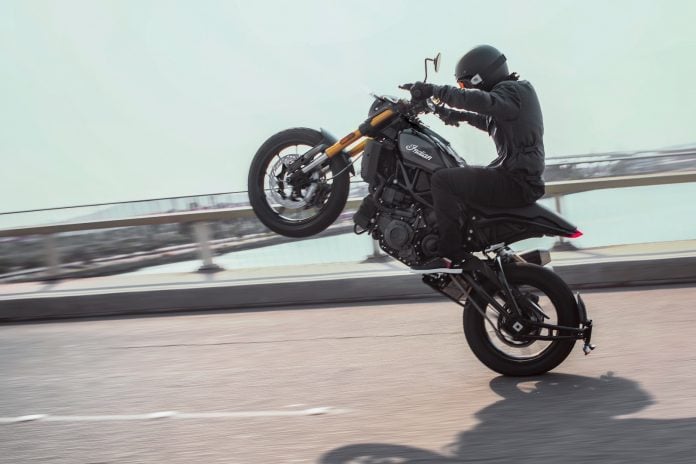 Riding the wave of flat track racing fascination, the 2019 Indian FTR 1200 S and FTR 1200 make their debut together.These are two high-performance motorcycles, with the suspension, defeatable ABS, dashboard, and paint being the primary differences between the two models. Let’s take a First Look at the 2019 Indian FTR 1200 S and its $2000 less expensive sibling.1. With 120 horses on tap, the 2019 Indian FTR 1200 puts out serious power. The liquid-cooled 60-degree V-twin has a DOHC design and four valves per cylinder. It’s a rev-friendly short-stroke design that allows the motor to put out maximum horsepower at 8250 rpm, and a muscular 85 ft/lbs of torque at 6000 rpm. Displacement is a true 1203cc, with the piston measuring 102mm across. All those number point to plenty of fun, and the 525 chain drive looks cool.2. The seating position on the FTR 1200 is definitely upright and sporty. The passenger-ready seat sits over 33 inches above the pavement, and the ProTaper bars are appropriately wide and tall. In contrast to the forward footpegs on the Indian Scout, the FTR 1200 pegs are behind the swingarm pivot.3. Curb weight is well over 500 pounds, so the FTR 1200 is not a featherweight—at least for a sporting motorcycle. Indian claims 488 pounds dry, and you never know exactly what ‘dry’ means. Regardless, if you fill up the 3.4-gallon tank, you’re already over 500 pounds and still not ready to hit the start button.4. The 2019 Indian FTR 1200 chassis numbers reflect its dirt track heritage. With a generous 60-inch wheelbase, a relaxed 26.3 degrees of rake, and a stylish 19-inch front wheel, don’t expect a serious canyon carver. It certainly should be a stable bike, and Indian does claim a lean angle of 43 degrees—that’s good clearance. These numbers leave plenty of room for speculation.5. Flat-track racing inspired Dunlop DT-3 tires are shod on cast aluminum rims. With a dirt-friendly low-rise tread pattern, the tires signal that there is definitely a focus on styling over pure street performance. The rear tire is just 150mm across and has a flat profile, again pointing away from pure performance. The 18-/19-inch wheel combination limits aftermarket tire choices, though the rubber does look the part of a flat tracker.6. The big functional difference between the 1200 and upgraded 1200 S is the suspension. The 1200 gets Plain Jane non-adjustable suspension. The 1200 S has full adjustability at both ends. The fork on both motorcycles is a 43mm inverted design. The shock on the 1200 lacks the external reservoir used on the 1200 S.7. Indian seems to be promoting the 2019 FTR 1200 as a wheelie machine. Press photos and teaser videos both show single-wheel action.8. An assist-and-slip clutch should make riding the 2019 Indian FTR 1200 just that much easier. We are big fans of that design, and it’s great to see it on this motorcycle.9. Brembo supplies the braking, along with standard ABS. Those dual Brembo Monoblock 4.32 four-piston calipers are serious business in the front, along with 320mm rotors. Indian allows defeating ABS on the 1200 S. Given all the other chassis and motor numbers, expect 1200 S riders to back it in whenever possible.10. The 1200 S gets a fancy LED dash, while the 1200 uses an analog clock with an LCD inset. It’s actually a bit startling to see the full-color 4.3-inch screen on the retro-friendly FTR 1200 S. However, it will hand over lots of information to the rider. The analog-style FTR 1200 display looks cool and will stick to the basic readouts.11. Paint is the final difference between the 1200 S and the standard 1200. Black is what you get with the FTR 1200, while the FTR 1200 S has two beautiful two-tone designs, as well as a top-of-the-line Race Replica livery tacking on another thousand to the FTR 1200 S.12. Be patient—you won’t be able to get a 2019 Indian FTR 1200 S or FTR 1200 until it’s actually 2019. Indian says “the first half of 2019,” so that’s a wide range. No matter how long the wait, we look forward to swinging a leg over the 2019 Indian FTR 1200 and 1200 S!