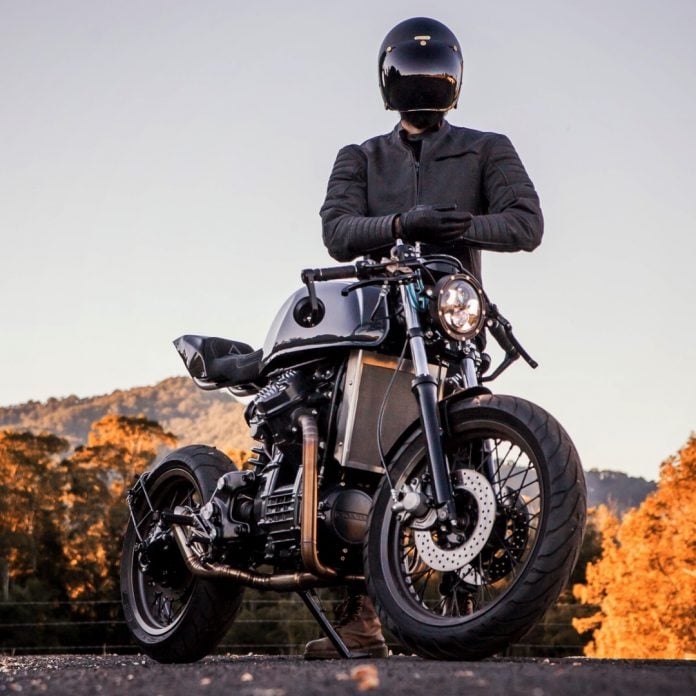 The Honda CX series was produced from 1978 to 1983, and its place in motorcycling history is somewhat mired in controversy.The motor was a departure for Honda; not only was it Honda’s first V-twin, but it was also longitudinally mounted with pushrods and liquid cooling, along with a shaft drive.The styling options ranged from the humble CX500 standard it was launched as, to the CX650 Turbo fully faired upright released at the end of the CX line’s life cycle, with a Custom variant thrown into the mix. 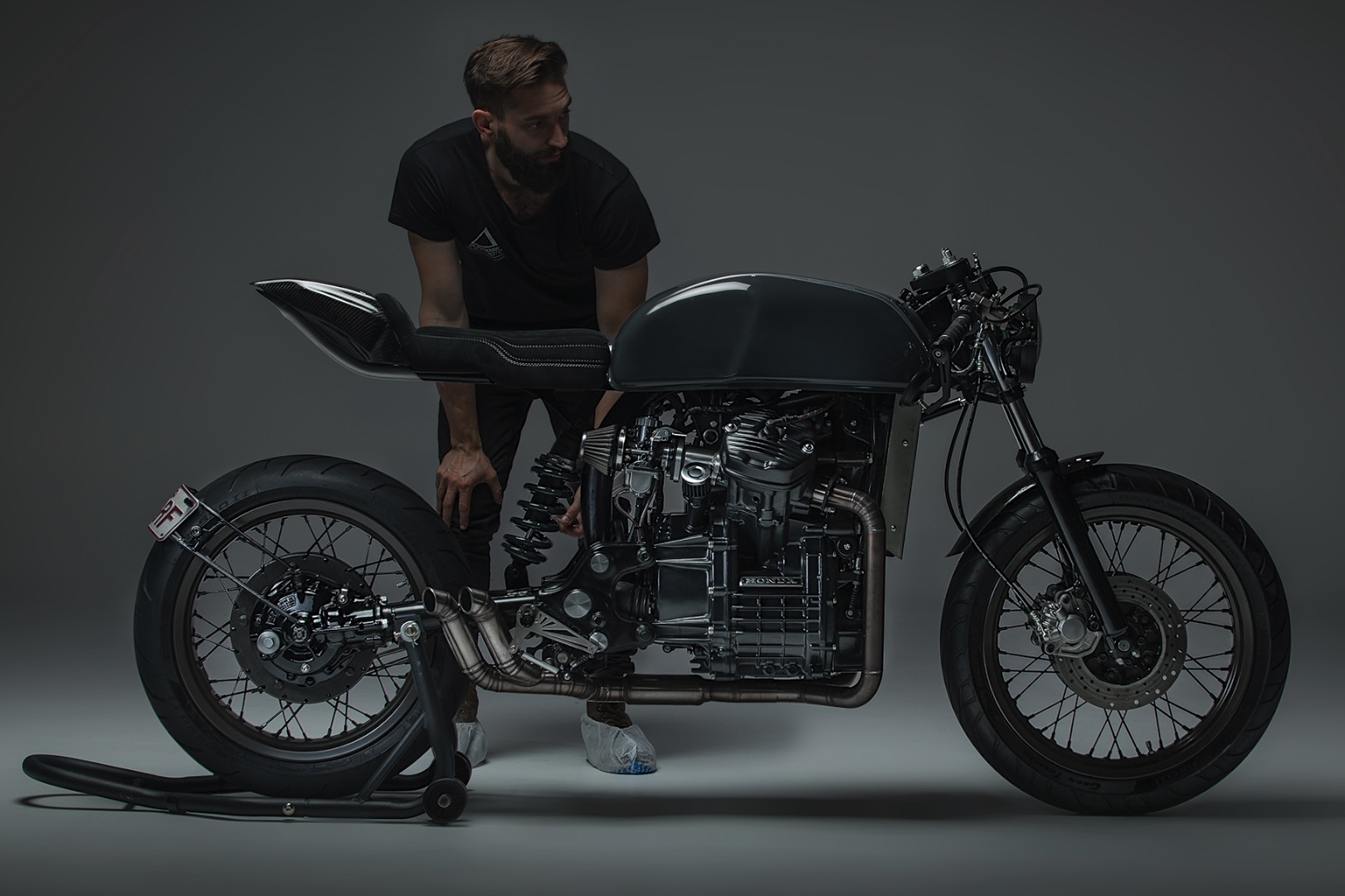 In 2018, the CX stands as a machine that many would-be artisans have taken to in droves. I posit that in any major city across the world, one is able to peruse Craigslist and find a virtual cornucopia of Honda CX motorcycles in varying states of rideability, ranging from a collection of parts in a box to roadworthy machines.All these listings will be related to the common theme that the CX in question was the subject of a dubious café racer or bobber experiment. As I type this story, there are a few prime examples of what’s just been described in my area.“I was given the bike by a friend as an unfinished project,” says Tom Gilroy of Purpose Built Moto based out of Gold Coast, Queensland, Australia. “He was moving overseas and wanted to see it become something. This was just as I was starting to do customer builds in the garage, so I sold it to a guy with the condition I would build it for him.”Despite being located quite literally on the other side of the earth from my California home, the CX’s legacy rings true across the globe. For Gilroy, this 1981 Honda CX500 posed a unique and fulfilling challenge, as this machine would eventually fall into Purpose Built Moto’s Signature—motorcycles built to showcase Gilroy’s abilities to the nth degree.“The Honda CX500 is a hugely saturated bike when it comes to café racer style customs,” Gilroy says. “The funny thing is that it has no real classic styling cues. When I was designing this bike, I took a sharp turn away from anything retro or classic. Instead, I chose sharp lines, modern composite materials, and futuristic accessories.” 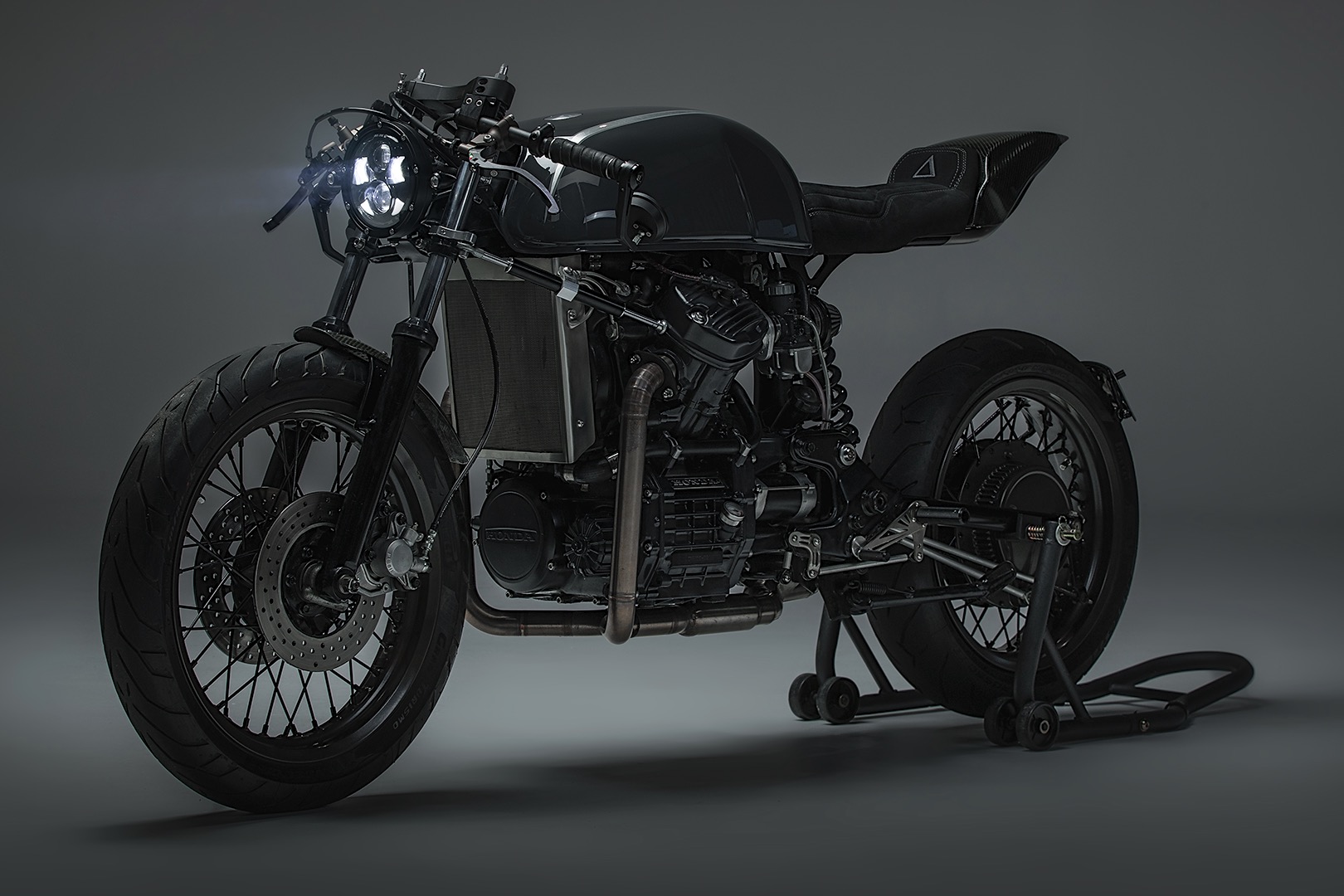 All told, the project took roughly 18 months to complete, with much of the work done painstakingly by hand.Visually, the Purpose Built Moto Signature CX500 is miles away from what we’ve seen time and time again. Interestingly, it all started with an exhaust design.“The grounds of the overall design stemmed from a muffler design I modeled up in CAD,” according to Gilroy. “From there the bike took shape including the all-aluminum subframe and integrated tail lights.”Gilroy painstakingly combed through the bike, revamping componentry or replacing it altogether. The 33mm Showa fork was overhauled with refreshed internals and given spring-preload adjustment, which the original CX500 never had, along with a brilliantly new CNC-machined triple clamp assembly.In the rear, a far bolder approach was taken. The subframe was slashed, chopped, and redesigned to accommodate a monoshock alternative, providing benefits in handling, stability, and weight reduction.This alteration to the rear suspension would provide another benefit regarding the styling, something that Gilroy is quite proud of when it comes to the Signature CX500. It wasn’t achieved easily, as Gilroy recalls. “This was the first time I had ever fabricated with aluminum and worked with carbon fiber, so there was a steep learning curve with that.” 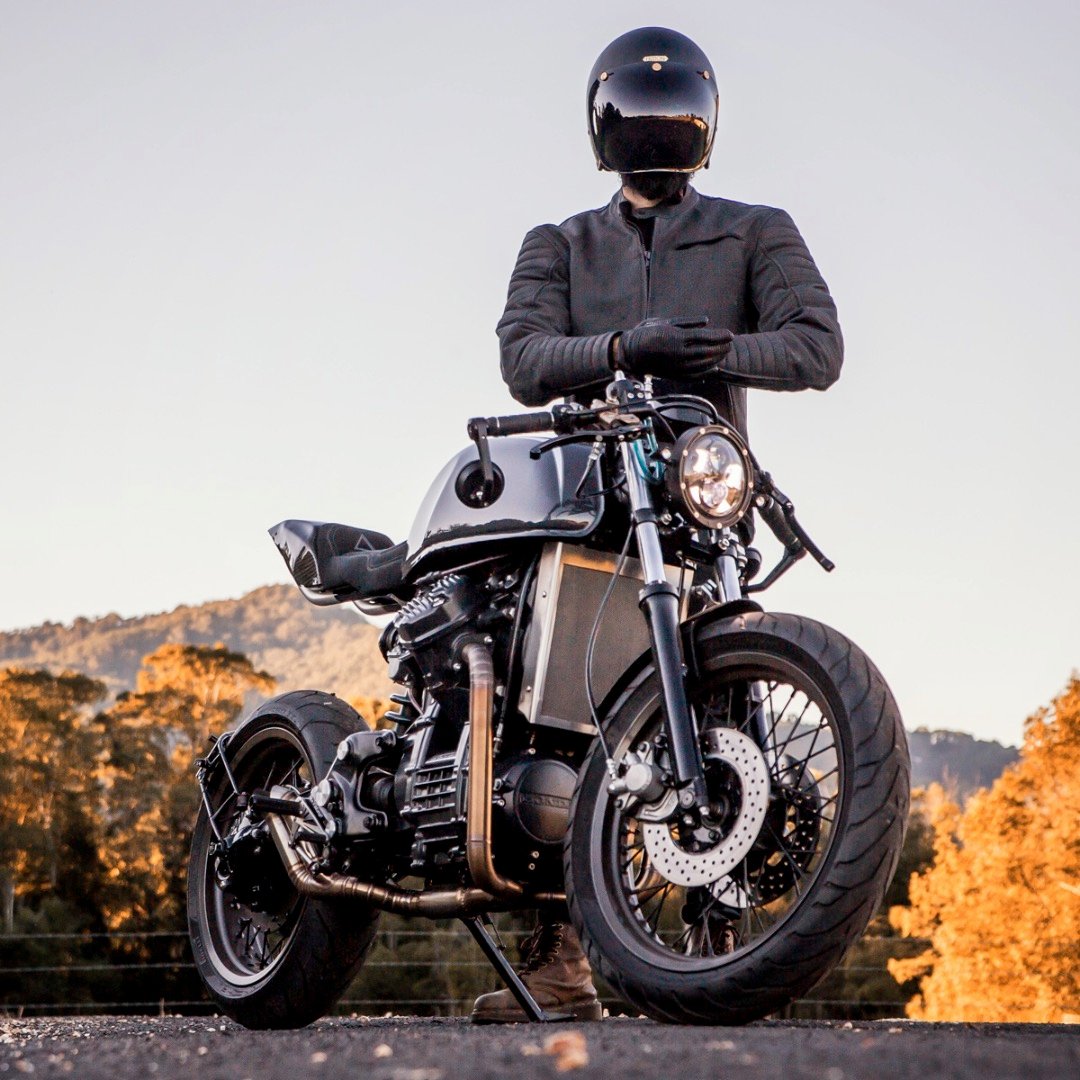 The sleek carbon fiber tail also paves the way for the unique integrated taillight scheme. With an almost sci-fi quality, aluminum tubing reaches back from where the rear subframe once was and houses the dashing integrated taillights.At first glance, one might assume that they are devilishly designed under-tail exhaust pipes. Luckily, and for the sake of heat resonance, they serve an entirely different purpose.With some of the trickier bits in the bag, it was time to work on the riding position of the Honda CX500. Although Gilroy hasn’t hidden his displeasure haphazard CX builds, he did opt for a sporty, café-style riding position with clip-ons and a flat, stitch-upholstered saddle. Also, new rearsets with custom linkage have been bolted up to the CX500 to aid the modern, aggressive riding position.While the CX500’s shaft drive reduces maintenance, it does add weight and complexity to the motorcycle. It also reduces the options one has for aftermarket wheels because the rear hub needs to accept a shaft drive.However, that didn’t stop Gilroy from throwing the classic Honda Comstar wheels into the bin, although few are likely to shed tears over the loss. Instead, the hubs were fitted with flanges and laced up with modern rims that are undoubtedly much lighter than the late 1980s alloy wheels.Often, I feel a pang of disappointment when discovering that a beautifully constructed custom bike has gone through the ringer regarding looks, but its engine performance was never examined. Happily, that is not the case with Purpose Built Moto’s Signature Honda CX500. 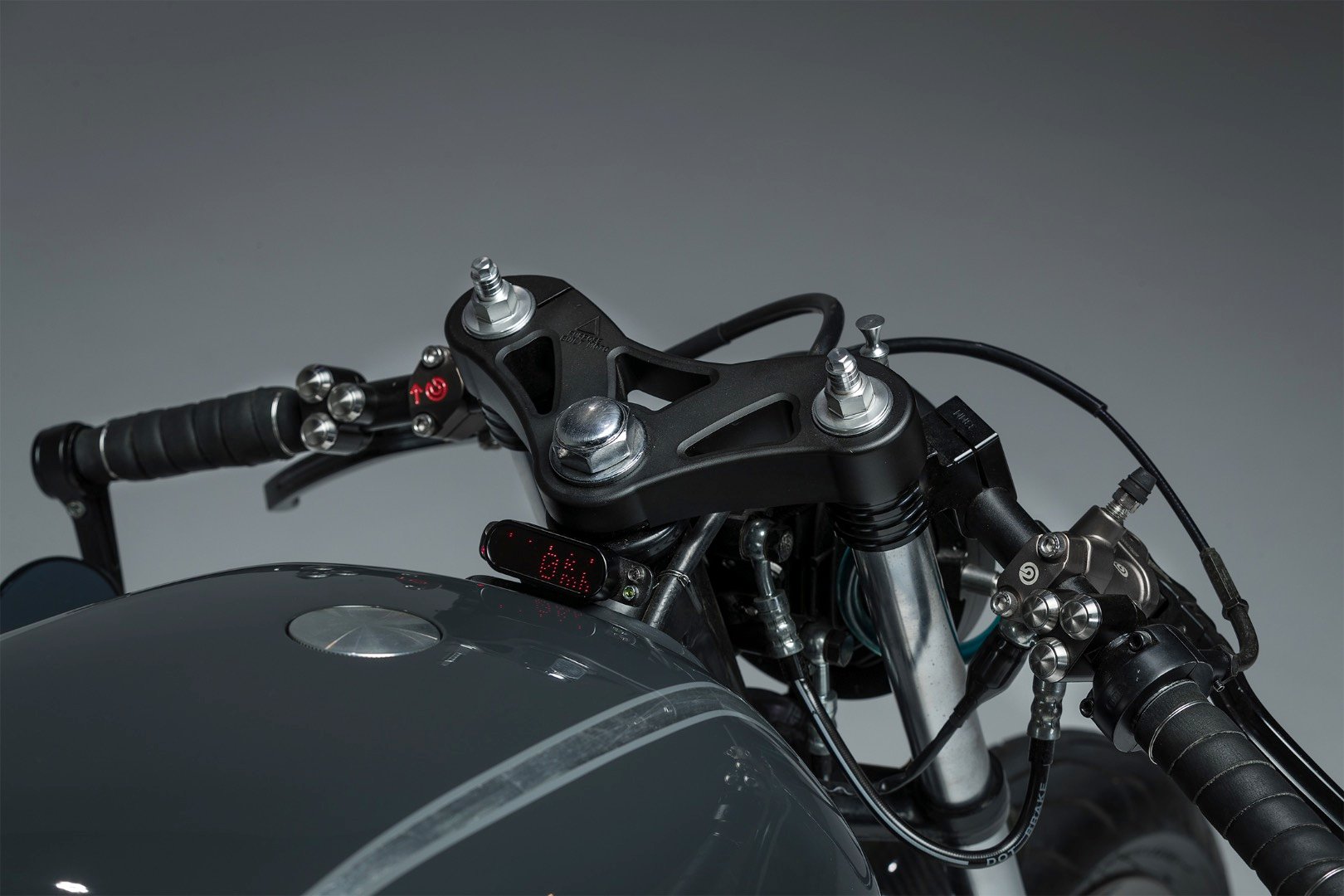 The 497cc 80-degree V-twin was given a thorough overhaul, inside and out. With fresh carburetors bolted on and a custom exhaust in place, the CX500 was able to net an additional 12 horsepower over its original factory output. That’s not too shabby for a 37-year-old machine that initially produced a modest 50 horsepower.The finishing touches of the motorcycle make this Signature exploration by Purpose Built Moto an extraordinary one. The subtlety of the glossy blue-grey fuel tank, combined with the various carbon fiber bits spread throughout the build, is a demonstration of the phrase “less is more.” There are no extravagantly painted details; this machine obverts the gaudy and exemplifies tasteful aesthetics.Gilroy has a unique perspective on building and tends to avoid outside influence—an issue that all creative types can sympathize with. “I block myself out from what most others are doing and turn to other forms of art and creation for influence,” Gilroy explains.“I am an advocate for the responsible use of psychedelics in the creative process. This CX500 was no exception and, with a little help, I feel some new ground has been tested on this bike.” 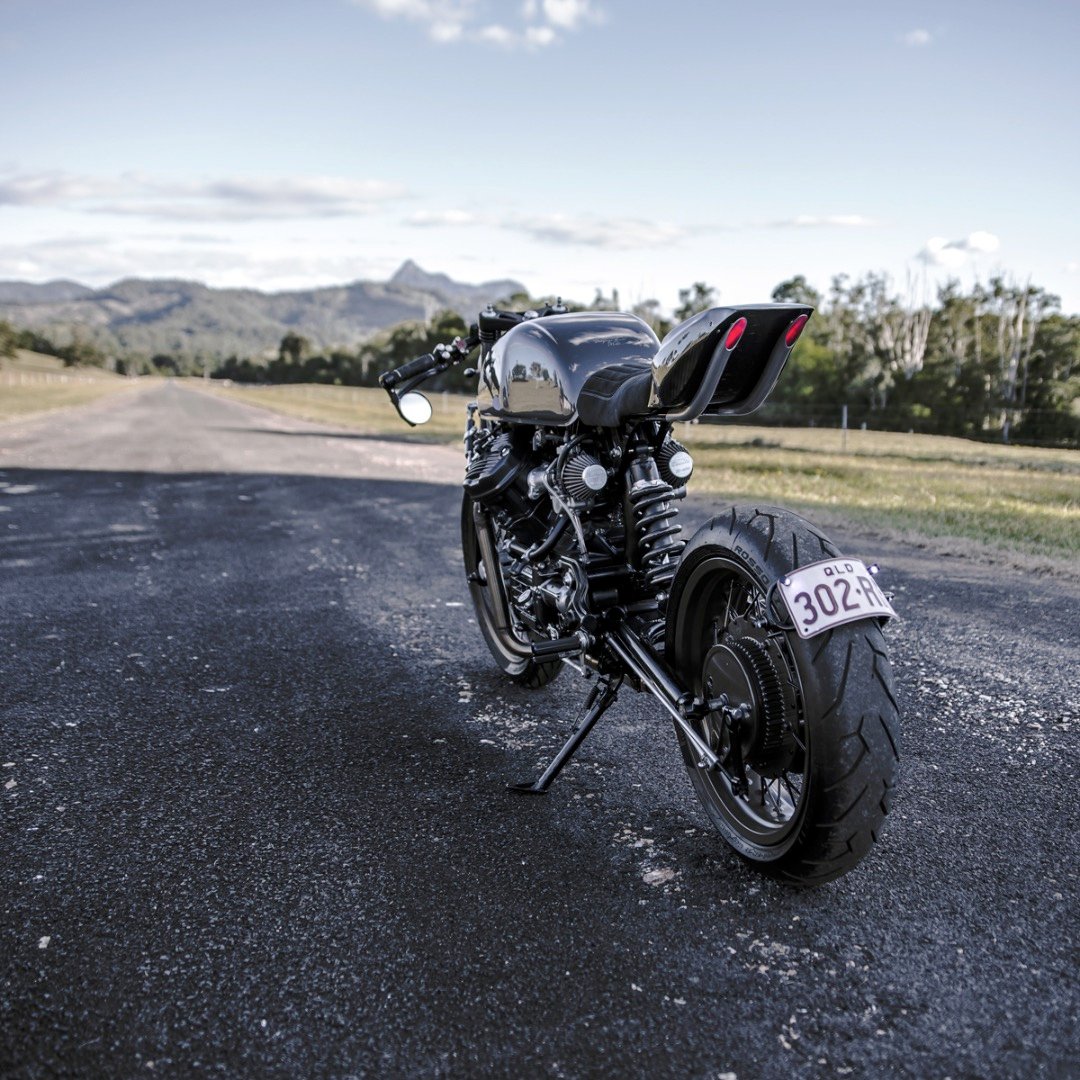 Every creative has a personal process and, luckily for us, Tom Gilroy of Purpose Built Moto has found his. The Honda CX line is a staple in the café racer community, and it has served a great many riders well, in spite of its disreputable colloquial namesake—The Plastic Maggot.In doing so, there have been plenty of build missteps—the Purpose Built Moto Signature Honda CX500 isn’t one of them. This motorcycle shows us, above all, that no reputation is ever set in stone.