In 1973, Kawasaki unveiled the Z1, marking a revolutionary step in performance for motorcycles. During its time, it claimed numerous records and quickly became a revered platform within the world of racing.

With the retro-craze in full swing, designers were wise to tap the rich heritage of the now iconic Z1, which has inspired the contemporary Z900-based 2018 Kawasaki Z900RS in more than just appearances.

1. The 2018 Kawasaki Z900RS’s inline-4 has been optimized for torque and it’s an absolute blast. Twisting the throttle of the ’18 RS will confirm one thing—this 948cc engine has some serious spunk with its claimed 72 ft/lbs of torque at 6500 rpm. From the stoplight, the ’18 RS provides gobs of usable power that will have you driving out of the exits with an ear-to-ear grin. It is a willing accomplice in the canyons, while remaining civilized in the streets. 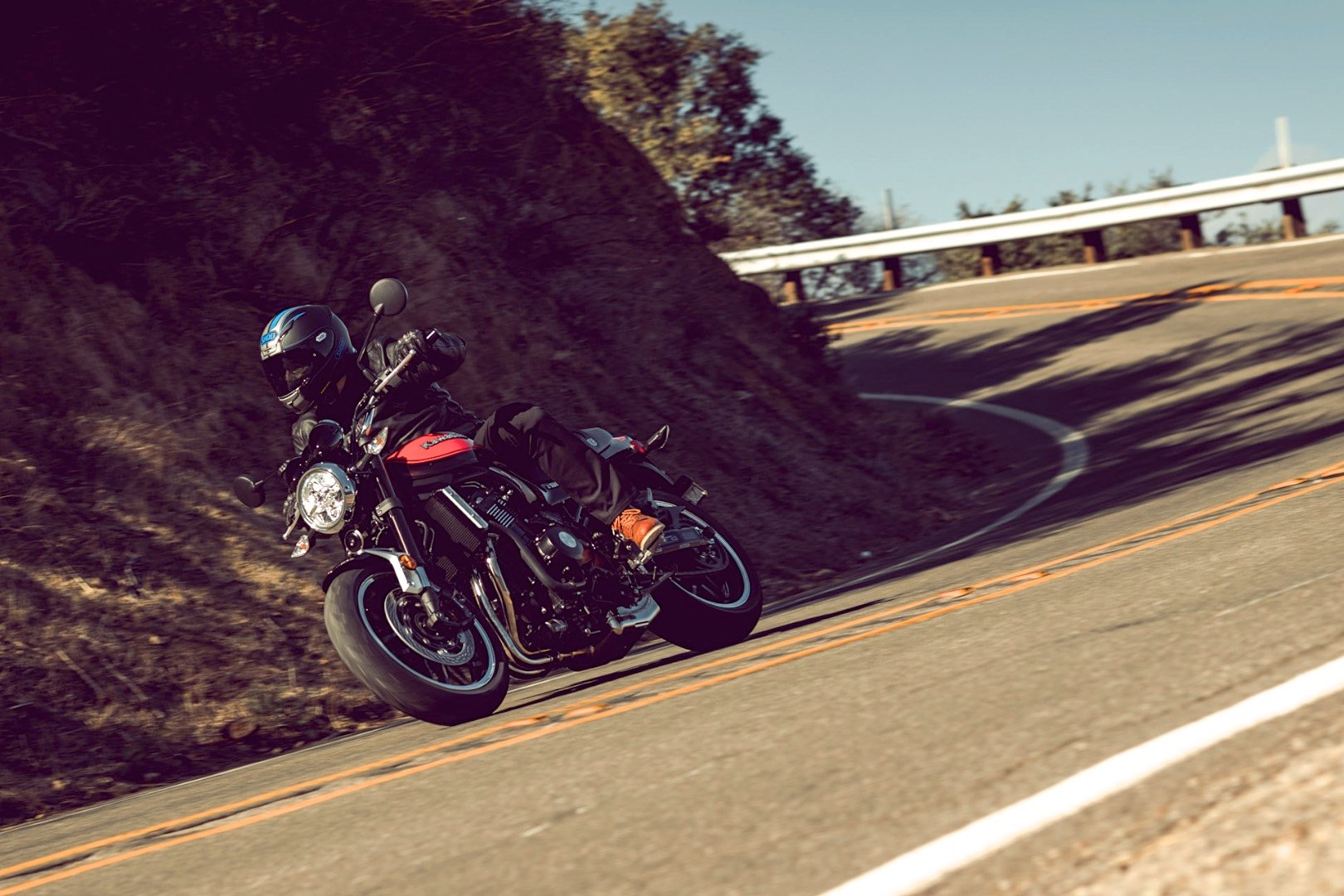 2. An ECU flash isn’t the only change from the Z900—the mechanical changes help give the Z9000RS’s motor its unique personality. Engineers aimed to give the RS a more refined, sophisticated and casual feel, making a distinction between the thoroughbred leanings of the standard Z900. Calmer cam timing, smaller diameter exhaust, and lower compression help facilitate those changes, as does the Z900RS’s heavier flywheel.

3. The throttle is binary. Initial throttle application can be a bit on/off. While this isn’t a huge detriment, it can be an issue when adjusting speed mid-corner. Once you’ve calibrated your wrist, you can usually work your way around it.

4. The tuned exhaust sings a good ol’ tune. A satisfying exhaust note is part of the motorcycling experience, and I was pleased to hear the nice tone that the Z900RS’ revised exhaust gives out. Kawasaki did a great job of polishing the headers and giving it a classic look. For Z1 purists, no, it doesn’t have dual exhaust. However, from a performance standpoint, the 4-into-1 system reduces weight and allows for more power.

5. Shifting is a snap aboard the six-speed 2018 Kawasaki Z900RS. First gear has been shortened, giving you a helping hand off the line and sixth gear has been lengthened to reduce revs and engine vibration at cruising speed. At 65 mph in sixth gear, you’ll be turning around 4500 rpm, making for a calm and collected experience. There’s also an assist-and-slipper clutch to ease the action and reduce wheel hop when aggressively downshifting. 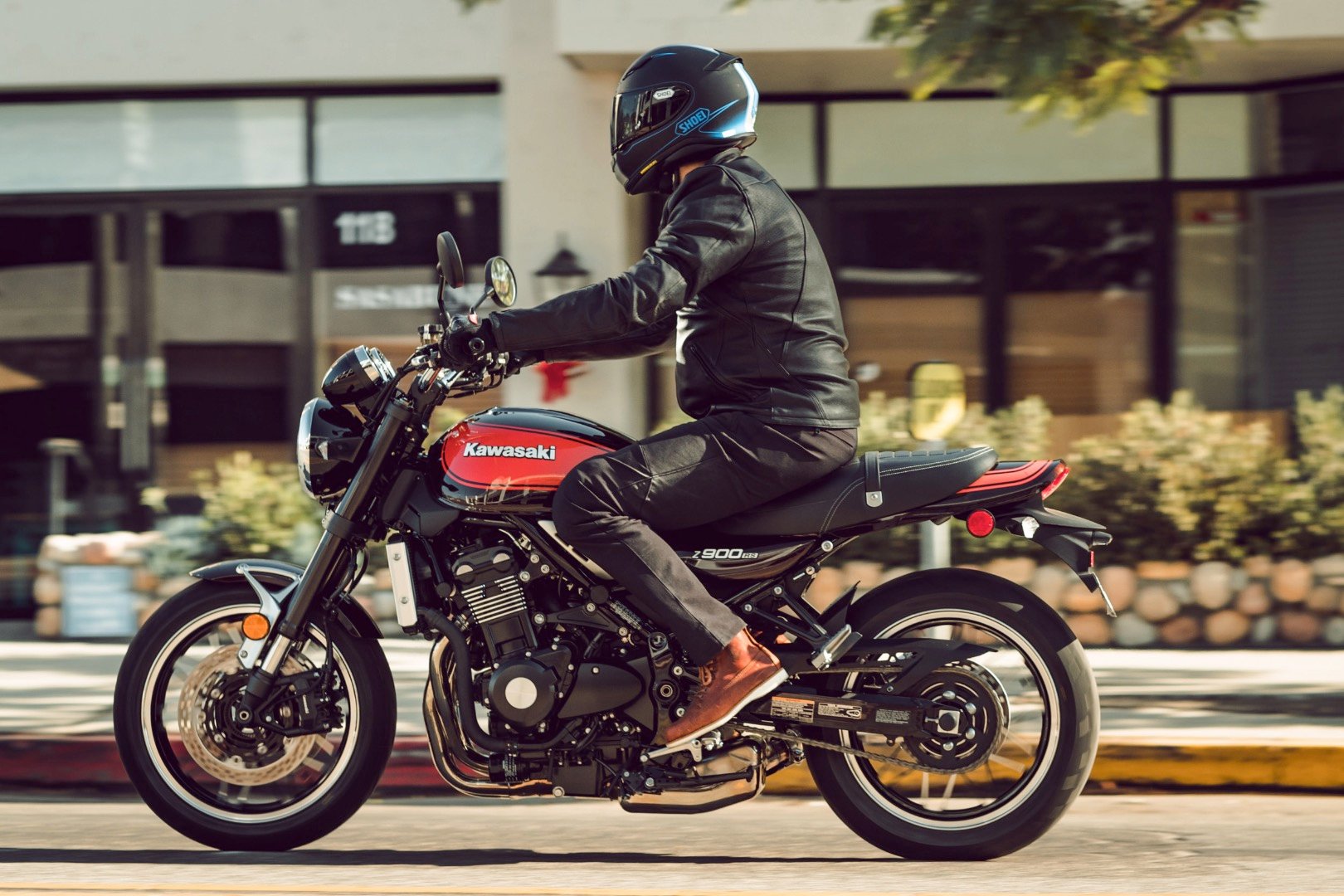 7. The classic upright riding position returns. The Z900RS features a neutral riding position that doesn’t compromise its ability to push—you’ll still have plenty of room to move around the bike when having fun. The wide handlebars are a bit higher and closer than that on the Z900, while the foot controls have been lowered and moved slightly forward, decreasing knee bend. My 32-inch inseam allows me to flat-foot aboard the Z900RS, which has a 31.5-inch seat height (a low-seat option is available). In all, it makes for a pleasant riding experience, though the stepped bench seat is a bit firm.

8. The trellis frame on the Z900RS is fundamentally different from the Z900. Kawasaki engineers lifted the front end, and lowered the rear. The Z900RS’s wheelbase is an inch longer than the Z900, and the rake kicked out almost a full degree. A Z900RS-specific triple clamp increases the steering offset, which reduced the trail to retain responsive handling. The Trellis frame’s upper tubes were also narrowed to allow for the old-school teardrop 4.5-gallon fuel tank.

9. Effortless handling is intrinsic to this roadster, and one of its greatest strengths. The Z900RS is a responsive machine; any subtle suggestion and the motorcycle complies immediately. This makes it beautifully poised around town, but more importantly, at pace. Its 58-inch wheelbase makes for a truly stable machine, especially while on the edge of the new Dunlop Sportmax GPR-300F tires. The moderate 25.4-degree rake allows for a responsive turn in rate, without ever edging towards nervousness. In all, this bike handles incredibly well. 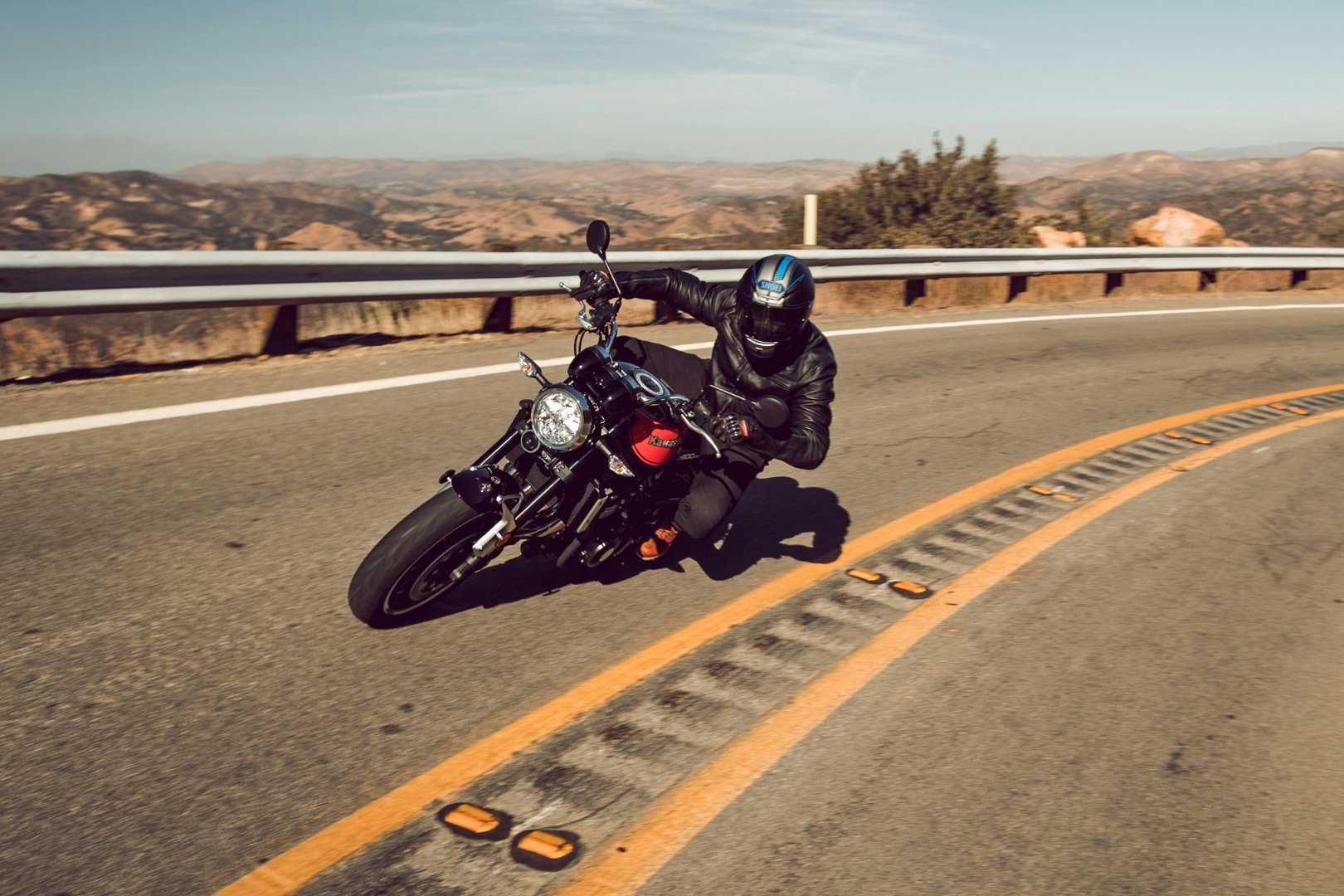 10. Sporty KYB suspension is bolted onto the RS. The suspension componentry is right off the Z900 with a slightly lighter spring rate for a more casual experience. The non-retro inverted fork is fully adjustable, while the shock gets by with spring-preload and rebound damping adjustments. Stock settings are a bit conservative, but offer a good range of adjustment, allowing you to get your set up dialed in. Around town, the suspension gobbles up LA’s world-renown terrible pavement without delivering a whole lot of energy to the rider. When you’re out having a weekend blast in the canyons and have smooth tarmac, you’ll be able to charge in and out of corners with the utmost confidence, as the Z900RS is surefooted.

11. The Z900RS has the equipment to stop quickly. Feel at the radial-pump lever is progressive and predicable from the radially mounted four-piston monoblock calipers and 300mm floating discs. Initial application isn’t vicious and provides a good amount of attack that riders from across the board will find approachable. I would opt for steel-braided lines and a more aggressive brake pad to get a bit more bite when out for a spirited Sunday ride, though what’s found on the RS is perfectly capable in stock form. ABS is standard and non-adjustable.

12. The instrumentation on the 2018 Kawasaki Z900RS blends vintage styling with modern expectations. Traditional dual analog clocks sit on either side of an LCD dash that includes gear position indicator, fuel gauge, temp gauge, and other essentials. If you’re used to exclusively digital dashes, the dual analog clocks will be a little jarring, but they fit the part and function well.

13. When it comes styling, the Z900RS nails it. Paying tribute to one’s heritage, while also ensuring that every component is functional and attractive, is a challenge for engineers—we’ve seen it go awry before. By utilizing modern components, such as the round LED headlight, designers were able to keep the vintage look, while still having a functional motorcycle. The teardrop tank is beautiful, especially in the 1973-issue Candytone Brown/Candytone Orange, as is the tail cowl in the rear. 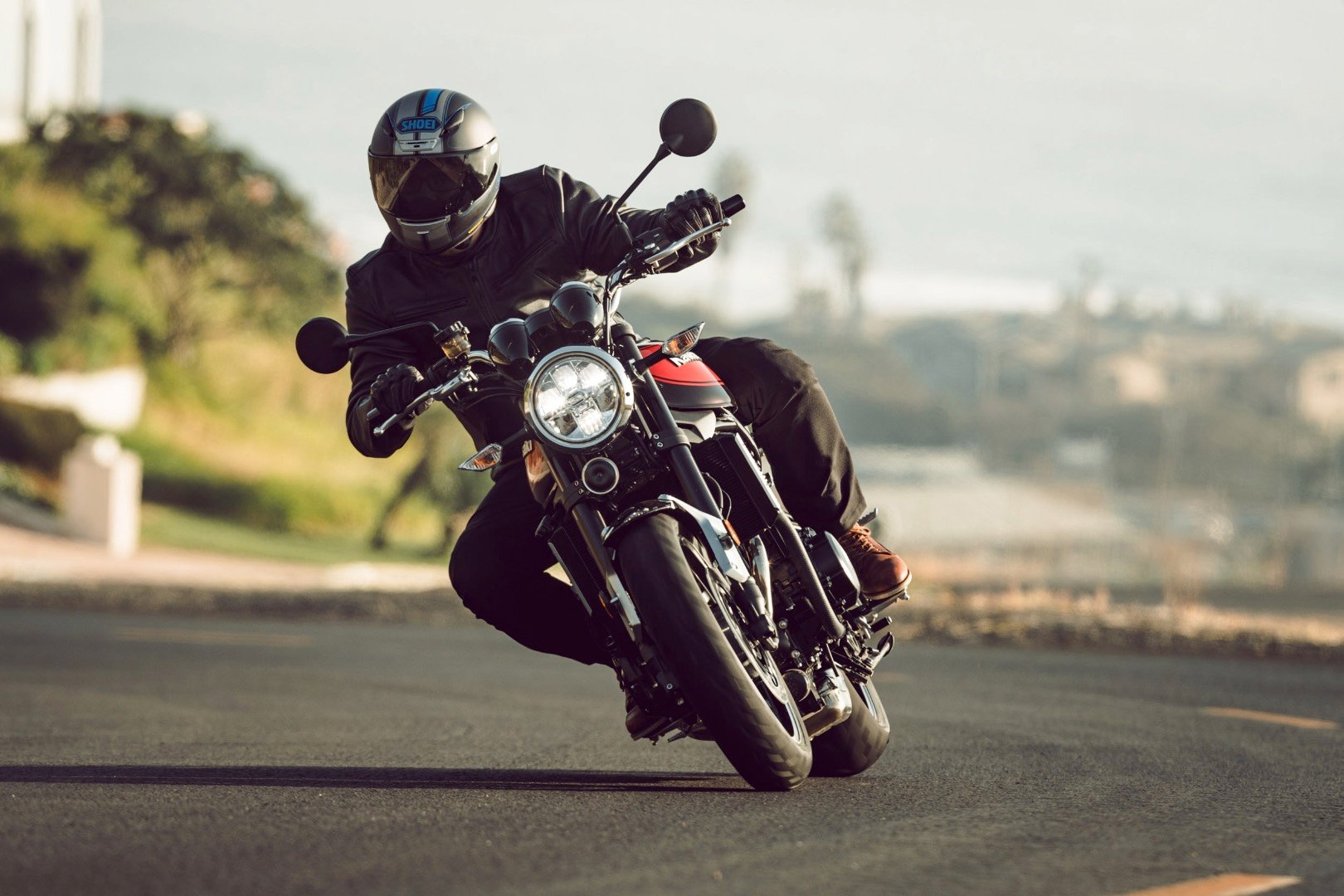 14. There are a couple of cosmetic retro touches. Rather than go to the expense of a true wire-spoke wheel, the wheels are cast with a flat-spoke design. Those cylinder fins aren’t for cooling—they’re purely a stylish touch.

15. The 2018 Kawasaki Z900RS might be the most well rounded vintage inspired machine around. The retro trend isn’t going away any time soon and, while the competition is fierce within this category, Kawasaki has put together an extremely competent machine that couples brilliant looks with great performance.