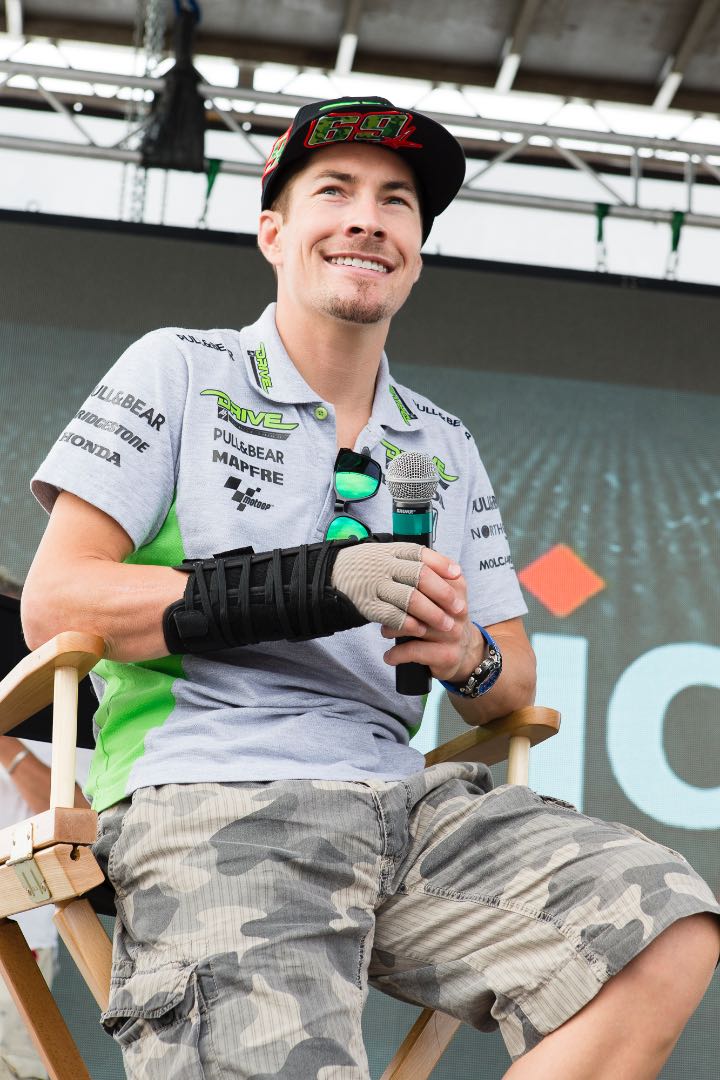 Like many of us, losing Nicky Hayden feels personal to me. I can’t say I really knew him, but I have met him many times over the years, and not always in a journalist/interviewer situation. So his death hits hard. I can only imagine how tough it must be for those who knew him really well.There have been a multitude of emotions that have washed over me in the last week, but I think maybe it’s the complete irony of his passing that gets me the most. No, make that the utter and complete waste of it. Oh, I’m not sure. It must be both. But, I do confess I am generally angry at the universe for taking him from us.Nicky shouldn’t have left us. He was a truly decent human being. My last interview with him was after the 2014 Catalunya MotoGP race when he was riding the customer Honda for the Drive M7 Aspar team. Although he’d finished in what I considered to be a respectable 12th place, by his standards he’d had a pretty demoralizing race. He was a little upset and, for sure frustrated; frankly, I didn’t really want to disturb him. But, the interview had been set up, and I guess we both felt a little obligated.

We sat in his motorhome and I really didn’t say much—he just recapped what had happened in a fairly animated way. I was struck not only by his determination—there was no way this situation was going to get the better of him—but also by his willingness to shoulder any blame on himself.It never even crossed his mind to blame his bike, his team, the tires, or any other myriad of things that would have been credible. I was amazed and impressed that he simply resolved to work even harder to improve next time.For me, that conversation sums up Nicky Hayden. A young man at the pinnacle of his powers, using skills that had taken nigh on 30 years to hone to perfection, and all he could think was that he needed to work harder to improve. No excuses, no reasons, no blame—just a decision to harness his legendary work ethic to even greater heights. I suspect only a handful of people actually knew how hard Nicky worked.Nicky was a true competitor on track. Remember the “backyard move,” as he later called it, on Dovizioso at Aragon a few years ago? It was a brilliantly timed last lap block-pass that gave Nicky the position to the flag. Nicky had clearly learned it thrashing around his home dirt-track with his brothers, and the lesson had stayed with him. Dovi must have wondered what happened. As hard as the move was, it was still fair; and not dangerous.Nicky knew he lived his life properly. When he took the 2006 World Championship he remarked, “I just believe good things happen to good people, and this is a great day for me.” He had been brought up right, and had clearly decided from a young age to live his life with honor, and decency, and integrity, and honesty. Coupled with some serious talent and a level of focus us mere mortals can only dream of, he had achieved his childhood dream—World Champion, that must have been a rush.The very first time I met Nicky he was completely unknown. My best friend and I had entered the last AMA race of (I think the 1997) season, held those days at Las Vegas Speedway. Mike and I were walking through the paddock, and he was telling me of this amazing young kid that had just won the 600cc Supersport race.As the words were leaving his mouth, lo and behold, the young man in question was walking in our direction. It’s funny, he looked nothing like the lean, fit young athlete that his body hardened into over the next couple of years. He wasn’t very tall, he looked like he was still carrying a bit of his puppy fat, and his mouth was bulging with the braces that were still in the process of shaping his trademark megawatt smile.As Mike and I chatted to Nicky good-naturedly about his skills, he ended up grinning broadly—I can still see it like it was yesterday—and said in his Kentucky drawl “Weelllll, I liike to sliiide the biiike.”Apparently so, I thought! Dang, if I’d have known what he was destined for, I’d have asked for his autograph there and then.Nicky never lost that boyish charm, that big grin, and that pure love of sliding the bike. It’s just too cruel, too frustrating, and still way too unreal that he’s been taken from us. We will always remember him, and I for one hope that maybe even just a little of the decency that was Nicky Hayden has rubbed off on me.Thanks Nicky, and Godspeed, our friend.Arthur Coldwells is President of Coram Publishing.  Story from our latest issue, available for free at the Ultimate Motorcycling app.