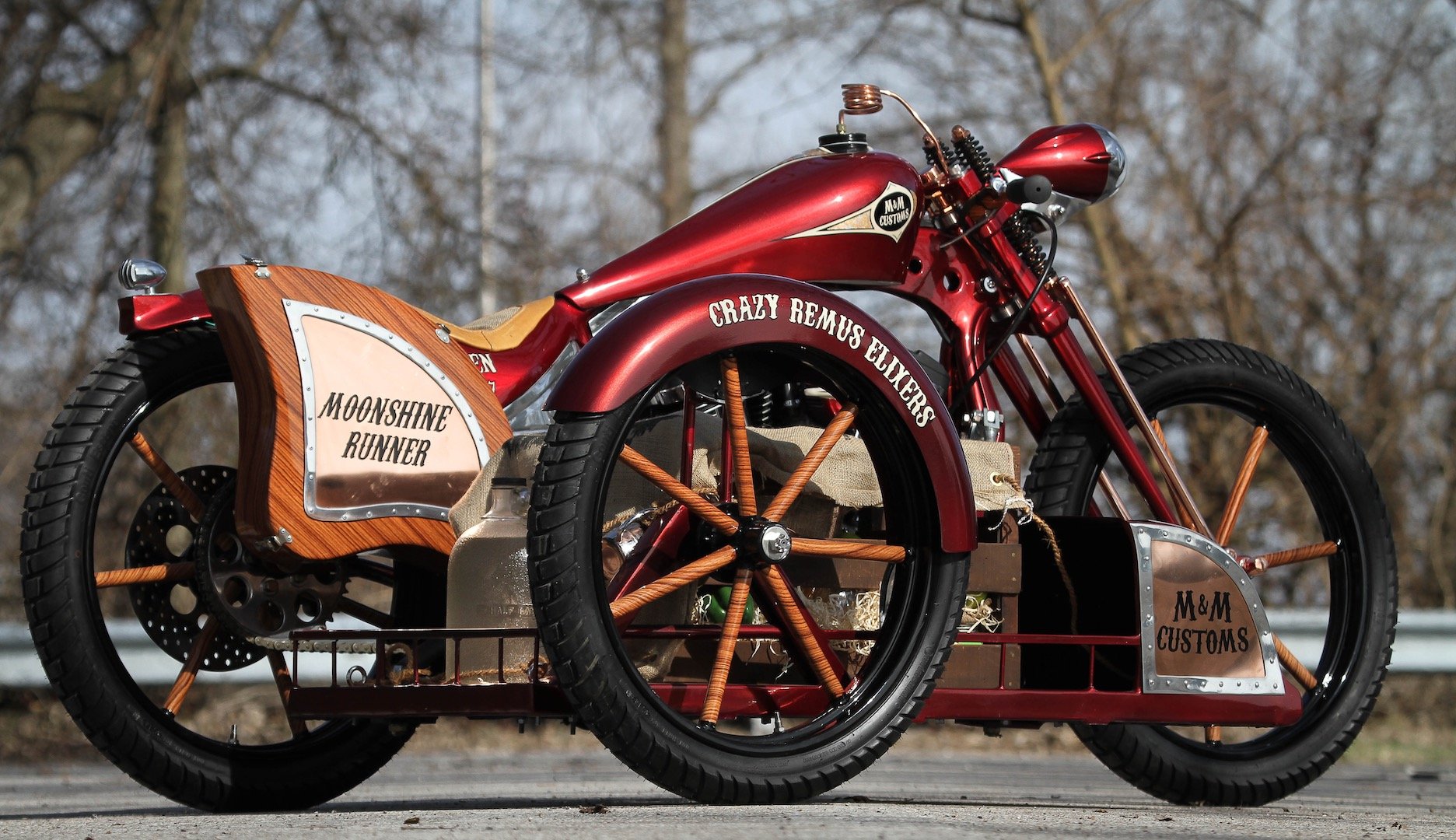 This story is from our digital December issue found at the Ultimate Motorcycling App on iOS or Android.From an idle mind, craftsmen shape a world in their image. It begins as a thought, then a pen is placed to paper, a medium is selected, and wrenches are turned. The result is the manifestation of nothing more than a figment—a concept that was one intangible is now on a garage floor taking form.For builders such as Mike Mcfadden of M&M Customs out of Owensboro, Ky., a subtle cue is all that’s needed to begin a new chapter. In this case, it was the “What ifs?” that created the Moonshine Runner.[Visit our Custom Motorcycles Page]\“I was watching shows with my wife, watching a show we grew up on called The Waltons,” Mcfadden explains (yes, the f is lowercase). “The show has a character known as Ike Godsey, and he owns a general store. I told my wife I was going to build a bike as if it were his nighttime project, and it would serve double duties of delivering produce and moonshine.” 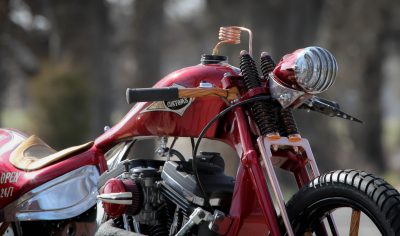 Mcfadden set upon his own nighttime project, one that would eventually garner accolades from all over the world. He started with the powerplant—a simple, but effective Harley-Davidson Evolution 883 motor. Once removed from its Sportster frame, the 883 found a new home within a freshly procured Voodoo Vintage that proved the perfect vessel.Low, sleek and pristine, the Moonshine Runner was quickly living up to its namesake. Although the 13-year-old motor was left untouched, save for an upgraded ignition system and DEI wrapped exhaust, we have to think it is enjoying its time in the limelight.Moonshine isn’t American—mankind has been imbibing in homemade spirits since before the written word. Through the lens of Americana, moonshine takes on something else.More than just a drink, it was a way of life, and eventually the source of folklore that runs deep in Appalachian tradition. To honor that time period, Paughco provided the springer front end for the modified Voodoo Vintage frame, not unlike what would have been romping around the Carolinian backwoods during the Great Depression.While the dipped wood-grain graphics on the three Scotty’s Invader wheels look the part, they’re actually fully modernized alloy wheels shod with Continental tires. End caps sourced from a Ford Model T add another layer of authenticity. The same can be said for deceptively time-period-specific wood-grain covered bars and saddlebag, with Riverview Graphics handling the process.The M&M Customs Moonshine Runner beautifully embodies the early 20th century spirit. Copper embellishments, spattered about, begin to pull everything together.“The tank is a one-off tank I made, and I inserted a Mason jar with a condenser so it could breathe,” Mcfadden told us. The copper tubing winding out of the gas cap mimics that of your average still, tucked away off the beaten path. The tank itself is perfectly sculpted, elegantly blending in with the natural lines of the Voodoo Vintage frame, eventually leading into the solo seat pan, another painstakingly crafted element from the hands of Mcfadden.Shutting off the headlamp and letting the celestial body’s guide your way is a precarious endeavor, but remember, the Moonshine Runner had just that in mind—carrying its precious cargo surreptitiously through the night, with only the beady yellow eyes of forest animals watching. 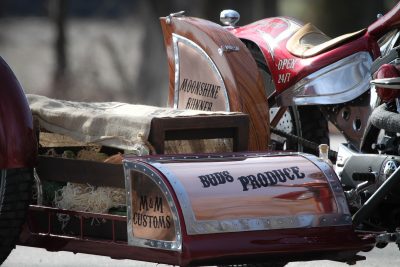 To carry the contraband, you’d need a sidecar that, according to Mcfadden, can carry “six pints of various flavors of ’shine.” It’s low slung carriage, and dropped bars suggest a rider with nothing more than a scarf to cover his face, a leather helmet, and a pair of steel-and-glass goggles as the only things between his head and the biting night chill.All too quick do we admonish those deep in thought. As we move into adulthood, our ambitions are centered. We are told not to dream, not to dare, not to create. The work of a craftsman—and M&M Customs’ Mike Mcfadden is among them—tells us why that is a mistake, and why inspiration can be drawn forth from the most subtle of suggestions.A quiet evening spent at home, seemingly at rest and, yet, a mind is toiling. To see the world from another perspective, we must first disengage, if only the rest of us had not only our eyes, but also the tools and will power to create, and to have the courage and ask “What if?”