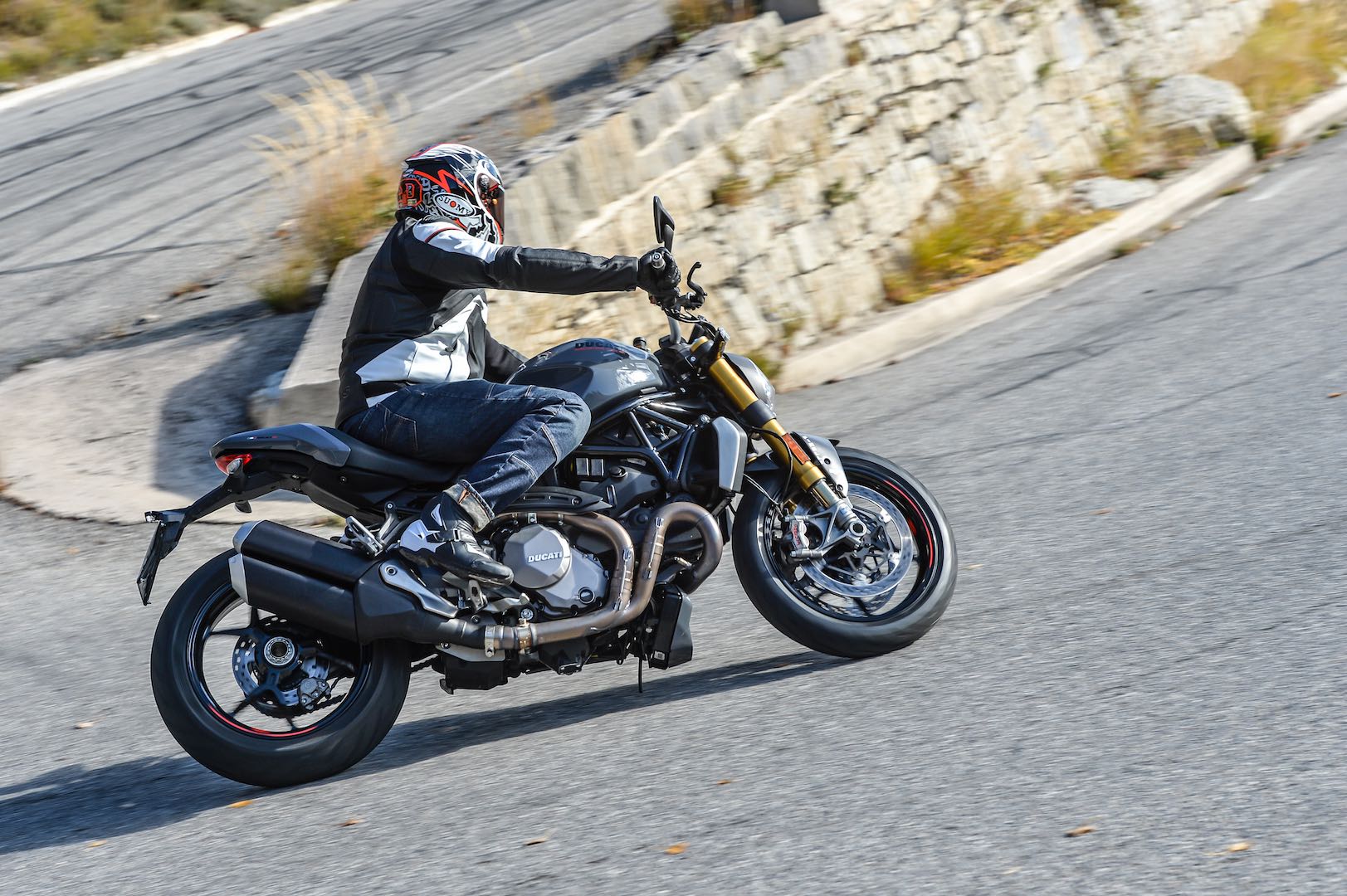 When Ducati released the 2014 Monster 1200, the naked sportbike felt more laid back than the Monster 1100 it replaced. Though the 1200 appeared bold, it felt bloated in regards to handling, and lacked that Monster character that has defined the bike for more than two decades.Ducati had also realized the lack of Il Mostro character, and decided it was time for a revision after the 1200 spent three years on the market. Meet the 2017 Ducati Monster 1200 and, more importantly, the upgraded S version we tested. The 2017 Monster is not just slightly upgraded; it’s a brand-new bike with improved performance, handling, comfort and looks.Ultimate Motorcycling headed to the ritzy F1-focused town of Monte Carlo to test the new flagship Monster. It’s refreshing to say that the Monster is back.A full review will follow, but for now here are the Ultimate Motorcycling Fast Facts from our First Ride Review of the 2017 Ducati Monster 1200 S.1. The Monster 1200 returns with the Testastretta 11° motor, but the 2017 is revised for more power, especially in the mid-range. With 150 horsepower–15 more than the previous standard M1200–the new Monster 1200 kept the grins going all day, especially from 3000 rpm all the way to 10,000 rpm. The 11° Testastretta has been a favorite since it was first introduced on the 2010 Multistrada 1200, and has only got better throughout the years. The tuning on the Monster’s Testastretta is by far the best to come out of Borgo Panigale. 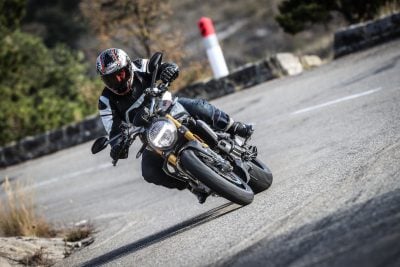 2. No more bloated handling on the new Monster 1200, due to a simple chassis refinement. The new Monster 1200 arrives with the traditional trellis frame and redesigned single-sided swingarm, which shrinks the wheelbase by just over an inch to 58.5 inches. This creates all the difference in regards to handling, and the 2017 model makes the previous Monster feel laggard, especially on turn-in. Of course, we rode the upgraded S with its Öhlins suspension, but this feeling of renewed handling should pass over to the base model.3. The S version features Öhlins suspension. When it comes to handling, nothing compares to Öhlins suspension–especially the 48mm forks found on the 2017 Ducati Monster 1200 S. The suspension was perfect in its factory settings, allowing me to aggressively toss the bike into corners while it provided the ability to read even the smallest of bumps on the road. It did this without sacrificing any comfort; not once was the ride harsh, even over some of the bumpier roads around Monaco.4. Brembo M50 Monoblock calipers for no-BS braking. As for the brakes, the M50 Monoblocks that squeeze the now-330mm dual rotors up front are the absolute best on the market (the standard M1200 uses M4.32 Brembos and 320mm rotors). The feeling at the lever provided optimal input during aggressive braking and trail braking, or when easing them on and off at stoplights.5. For the first time, the Monster S and standard receives Ducati’s Cornering ABS and Wheelie Control (DWC), and both can be easily deactivated. As for the cornering ABS, it’s seriously magical. As the test ride progressed, I experimented more and more, and was able to recklessly stab at the brakes at serious lean angle. I never felt a lack of security or traction. The one time when I did get to lock up the front wheel while ABS in setting 1 of 3 (3 being the most), the bike’s stability returned immediately due to the Öhlins suspension. As for the DWC, you can launch this bike aggressively without throwing it into a sick wheelie, something that I can’t wait to test at the track. 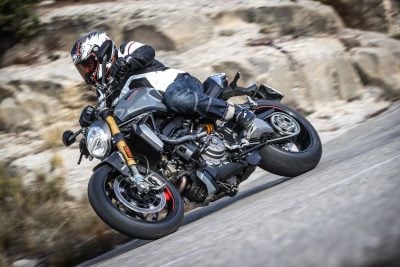 6. The refined Riding Modes can quickly bring you from hooligan hammering to urban utility, all three riding modes (Sport, Touring, Urban) easily available while riding. Each riding mode is also completely customizable in regards to electronics (DTC, ABS and DWC). The factory default settings for Touring and Urban were spot-on. For the most fun in Sport, I spent most of the day with DTC and ABS on 1, and DWC off.7. Also for the first-time ever, Ducati’s Quick Shifter (both up and down clutchless shifts) is available for the Monster. It is included on the 2017 Ducati Monster 1200 S, and as an option on the standard model. The system is flawless, especially when hammering through the gears at max rpms. However, I found myself still using the clutch for first-to-second shifts in town.8. The 2017 Monster 1200 is the most comfortable Monster to date. The revamped and narrower seat remained comfortable throughout our initial ride, and provides more room for hanging off the bike during aggressive cornering. Seat height is adjustable from 31.3 to 32.2 inches, and, while in its tallest position, provided all-day comfort for my 34-inch inseam. The rider triangle also provided no complaints, the wide bars allowing control over every situation, from never-ending hairpins to lane splitting in urban settings.9. As it enters its 24th year of existence, the Monster finally gets separate passenger pegs. Gone are the one-piece units that combined the passenger pegs with rider pegs. This solved one of the major issues on the former M1200, a lack of heel clearance when riding on the balls of your feet. I wear an 11.5, and had no issues with the 2017 M1200. 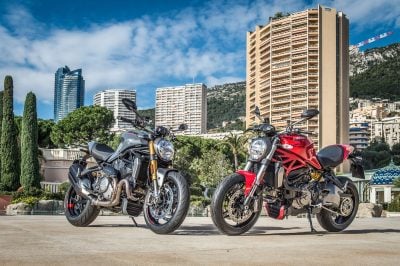 10. The ergonomics still aren’t quite perfect. There were two annoying points one the trellis frame. Just in front of the top of the engine’s vertical cylinder head, the frame butts out and pressed on my inner leg when hanging off the bike.11. Taking something from the Monster 1200 R, the 2017 Ducati Monster 1200’s exhaust offers better looks and a meaner sound. The Euro 4 compliant exhaust further solidifies Ducati’s success in delivering bolder styling, as well as bolder performance through sound.12. The 2017 Monster 1200 arrives with the same full-color TFT instrumentation as the Panigale, bringing more life into the cockpit. The display information changes based on one of three Riding Modes–Sport, Touring or Urban. Just like the Panigale, all data is customizable for a true personal experience.13. The 2017 Ducati Monster 1200 S remains less expensive then the R. Priced at $17,195 for the S in Liquid Concrete Gray ($16,995 in red), and $14,695 for the red-only base model, the new Monster 1200 is a bargain considering the updated powerplant and handling. The S is the serious bargain, considering it rivals the Monster 1200 R, and costs $2,000 less in that beautiful gray. After this initial ride, I’d argue the 2017 M1200 S is a better bike than the Monster 1200 R, and for $2000 less.Riding Style: