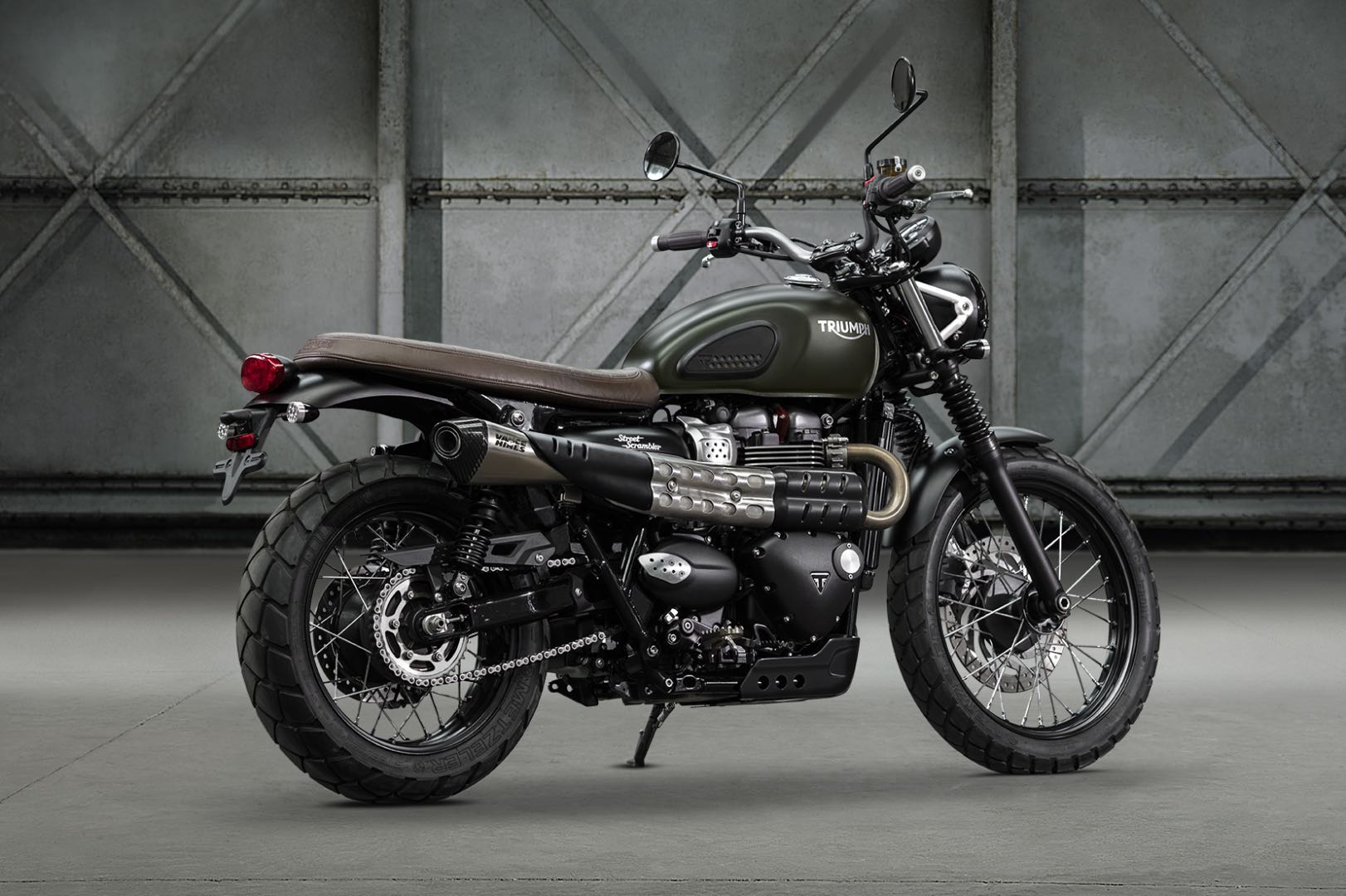 With the scrambler reaching critical mass, Triumph has unveiled its eye-catching Street Scrambler at EICMA (Milan Motorcycle Show). The scamp-like Street Scrambler is the time-honored British brand’s latest foray in the retro market,, and if we were only to base our thoughts on looks alone, it seems that Triumph’s experience in the genre is showing through in spades.

This latest evolution in the Bonneville line looks promising. The Ultimate Motorcycling staff has been enamored with the various Bonnie’s in the past, but until we get an official introduction to the Triumph Street Scrambler, we’ll hit you with the Fast Facts.

2. It’s more than a simple rebadging; the Street Scrambler was built to handle whatever you throw at it (within reason). We most likely won’t see the Street Scrambler entered in the Dakar Rally, but with a 19’’ front wheel, longer rear-suspension travel, wider handlebars, and Metzeler Tourance knobby tires, the Street Scrambler looks in fighting form. How will she handle? That remains to be seen but the wider bars, along with  the other key changes, should make standing up and getting loose quite fun.

3. The Street Twin’s 900cc Bonneville High Torque engine will be at the heart of the Street Scrambler. One of the biggest strengths of the Street Twin is its 900cc engine which produced around 55 horsepower. Tractable, and great for city use, the high-torque engine is a well-rounded powerplant to say the least. That should translate to plenty of fun, on and off-road. Readers should also note that the “Torque Assist Clutch” will still be present, and that isn’t marketing fluff; it really does reduce clutch pull.

4. When I think Scrambler, I think high-pipes. At this point, all of the major manufactures have their own rendition of a scrambler. I wasn’t alive during the first wave of scramblers. Since I’m not old, I don’t have any disparaging opinions, but high-pipes are one thing I’m a bit of a stickler on; they just need to be there. Triumph didn’t disappoint; a set of high-pipes can be found on the Street Scrambler, with silencers by Vance and Hines.

5. Suspension by Fox. Rear suspension that is. Owners will discover that they have preload, as well as compression damping at their disposal.

6. Bonneville mojo shines through exceptionally. Triumph’s attention to detail when it comes to the Street Scrambler must be commended. When it comes to style, Triumph is often second to none. The number-plate inspired side panel, the black bezel on the aluminum headlight, and of course the bash-guard begins to tie up any loose threads in regards to style.

7. Carry gear or human cargo, it’s your call. A nifty feature on the 2017 Triumph Street Scramble is the interchangeable pillion seat. That petite pad, designed to carry a passenger, can actually be pulled in place of a luggage track; just don’t forget your tie-downs.

8. With clocks that look this good, I might actually check them. Again, this is an area that Triumph really excels. The classic, yet undeniably modern-looking gauges that perform quite a few functions. Owners will have accoess to the following information: rev counter, gear position, odometer, two trip settings, service indicator, range to empty, fuel (level, average, and consumption), clock and lastly, traction control settings.

9. Just because it’s got classic looks, that doesn’t mean you’ll have classic safety options. The Street Scrambler will feature switchable ABS, as well as traction control. For beginning riders, many of which might be enticed to come into the motorcycling fold by the Street Scrambler, that’s a massive help. 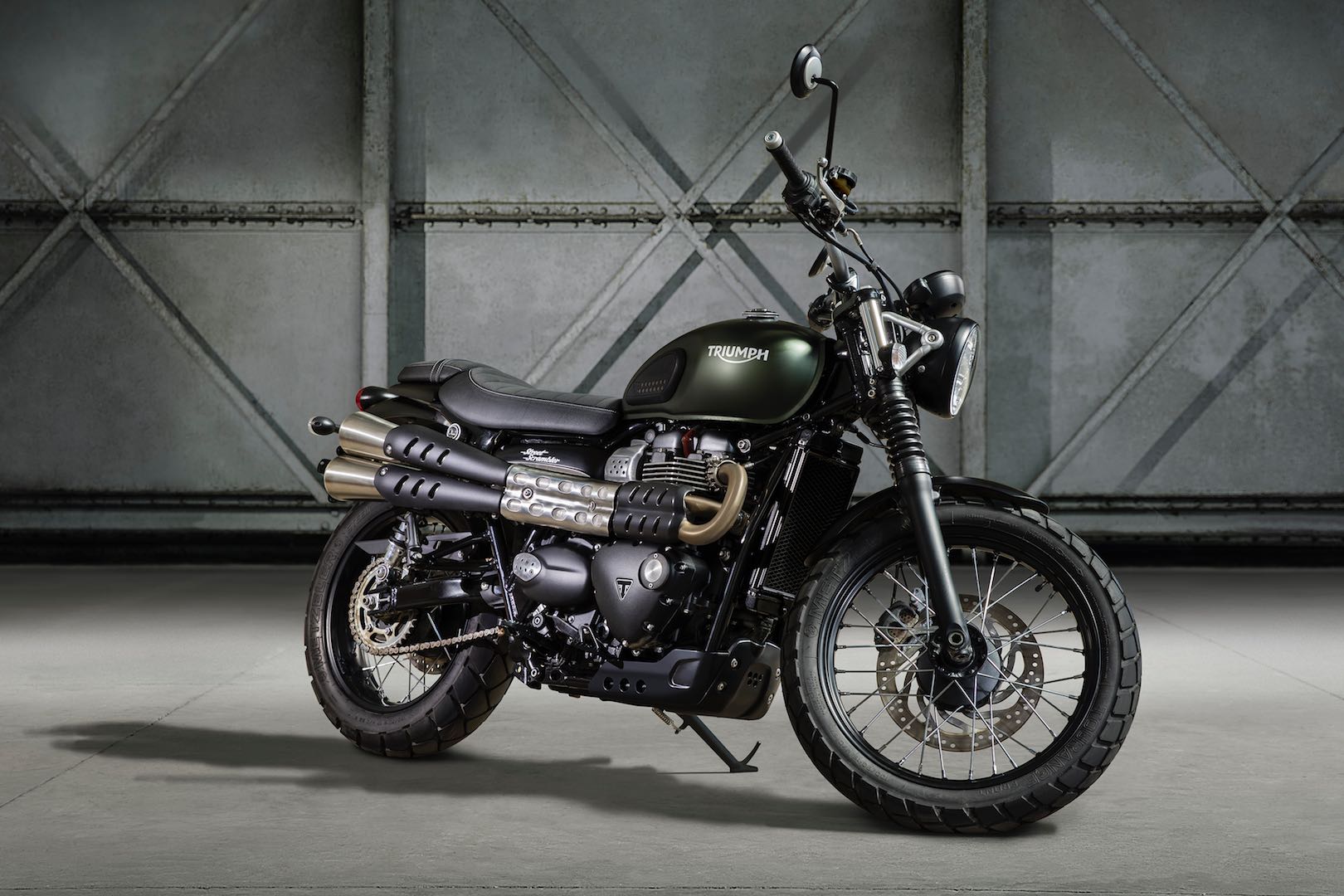 11. The Street Scrambler boasts a decent service interval. To some buyers, maintenance costs can become the deciding factor when purchasing a bike. But Triumph has stepped up its game, and according to Triumph literature on the Street Scrambler, the services intervals are set for 10,000 miles. That’s a good amount of riding with less time spent at the shop.

We’ll have to wait for official numbers regarding weight, horsepower, suspension travel and things of that nature, however the Triumph Street Scrambler has just marched its way into the lead pack as far as scramblers go. There are a ton of scramblers out on the market right now, which one is your favorite so far?