I really like my 1981 Honda Gold Wing. I’ve had it for years and personalized it by stripping off about 200 pounds of unwanted plastic to make a bagger out of it. 35,000 miles over 35 years has just broken in the motor, and most of the parts, save the consumables, are original. I added flat handlebars, heated grips, electrical outlets, and more. I liken it to a Mercedes S500 from its day and, like the S500, it handles like crap.

My Gold Wing is always ready to go, but I don’t ride it as often as I might because…it handles like crap. Around town cruising is fine, but 65 mph and up on easy sweepers starts to get a bit awkward. It feels like the chassis is made out of wet noodles even though the stock air forks hold air and are pumped to the correct pressures. Honda says 7-16 psi for the stock forks, and I’ve tried every increment to no avail.[Visit the Ultimate Motorcycling Gear/Parts Page]The rear air shocks were replaced with traditional Koni shocks by the prior owner. Though they are ancient, there are no leaks. Still, between the Koni shocks and the front end, I feel like I am riding a river barge and need a harbor tug to get me through the twisties.Enter Progressive Suspension, a La Palma, California company that builds shocks and springs for Harleys, metrics, off-road bikes, UTVs, and in the case of this article, bikes that aren’t exactly new.Suspension is all Progressive Suspension does, so the company can focus on getting right what many OEMs get wrong right off the assembly line. Progressive Suspension has fitments for certain bikes going back to 1947.For my Gold Wing, the choices were easy. I didn’t want to re-install the air shocks, even though Progressive has them. As the bike is much lighter than stock, I opted for the 412 Series shocks in standard, rather than heavy-duty, configuration. The shocks are available in chrome or black covers and springs.Progressive Suspension describes the 412 Series shocks as “simply the best value shock on the market today.” Features include speed-sensitive valving, a nitrogen charge, and five spring-preload positions. I ordered new boots and seals online to complete the upgrade, and Progressive Suspension supplied fresh Heavy Duty 20 wt. fork oil with the Progressive Suspension name on the bottle.I set the preload one notch up from softest with the included tool. As for the front, I only had one choice—Progressive Suspension’s “Original” Progressive Rate Fork Springs kit. This is an important ingredient in a system that will transform the handling of my bike from noodle to arrow.Now I’m ready for surgery. The shocks were a breeze to install. Fortunately, I had no issues with rust or stubborn bolts, so once the rear bags were removed, the old Konis slipped right off.When the old shocks came off, the swingarm sagged slightly and I utilized a small hydraulic bottle jack to lift the swingarm about an inch to allow fitment of the new shocks. I replaced the bolts and bags, and the rear was done in less than an hour.Fellow Ultimate Motorcycling Associate Editor Neil de Jager visited my garage to do the front springs. As Clint Eastwood said in Magnum Force, “A man’s got to know his limitations.” I have mine, so Neil stepped in. 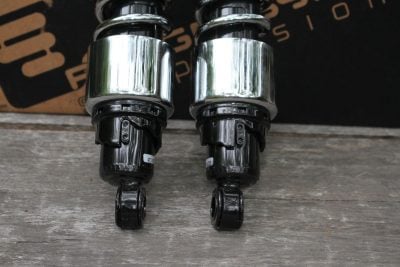 During the install we bent one washer and found a lower fork leg Allen bolt and copper crush washer that needed replacing. Kudos to Honda for still having parts for this 35-year old bike available. That added about $14 to the cost and a few days delay to allow for shipment from a regional warehouse. Shortly thereafter, the Gold Wing was ready to return to the street.The results of this conversion are obvious from the first few yards traveled. Over the road in a straight line, I can feel that the suspension is much firmer and it connects with every undulation, and following the surface of the pavement. It is much stiffer without being harsh.The 1981 Honda Gold Wing is now eager to change direction, without the vague feeling it had before. The rocking horse motions that were induced over bumps earlier are gone. I can feel how the suspension reacts to each road imperfection. Acceleration, as it is, is devoid of any rear squat and a smile emerged quickly on my face.I swung the Gold Wing from side to side within my lane, and each arcing motion was met with equal force from the suspension. I felt that my choice of the second to the lightest rear preload adjustment was the right one, especially since the bike was lightened considerably when I stripped of most of the fairing and bits.There was no bouncing from the rear and the damping was just about perfect. The Gold Wing felt more balanced and no longer wanted to wander around, obeying my every input and adding none of its own. The ride is pleasant, as well as confidence inspiring.With renewed faith, I wicked up the speed and bent the Honda into some sweeping curves. Faster and faster I sped, with the feeling that the rear end wanted it go in the opposite direction of the front completely gone. The Gold Wing no longer wanted to straighten up when encountering rough pavement, and the rear wheel simply followed the front with no drama. This sounds pretty simple, but it was not the case before the upgrade. 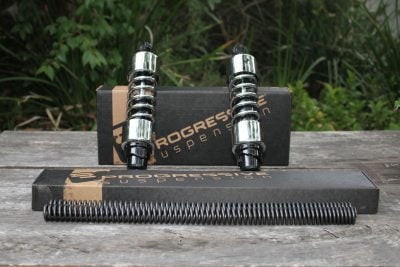 On the freeway the firmness let me feel everything that the tires encountered, thus increasing my confidence with every mile. Hard stops did not compress the fronted more than should be the case, and I felt that I was riding a completely different motorcycle.Back in the twisty bits, I was able to lean to my heart’s content while adding power and I was met with just the right amount of force from the suspension to allow me to ride at whatever pace I liked without the worry of the old noodle-like reactions.Obviously, this is no modern sport bike, yet I felt enabled to push it as fast as conditions allowed with every turning force met with an equal and opposite reaction that was perfectly balanced to keep the bike stable yet comfortable.During the period from ordering the shocks and springs until the first ride I had my hopes and my doubts as to the ability of the Progressive Suspension 412 Series Shocks and Fork Spring Kit to really make the bike work like I wanted it to. Fortunately, my hopes have been confirmed and I could not be happier.