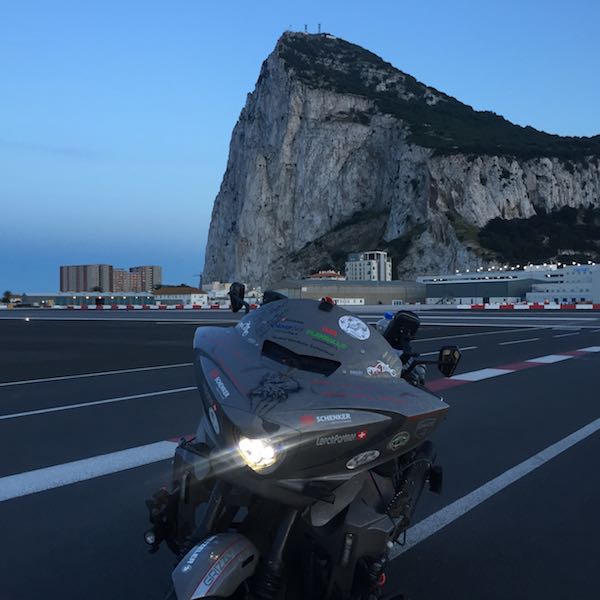 Usually after a weekend outing or a track day, I’m spent. But Urs “Grizzly” Pedraita has been putting us all to shame during his nearly 30,000 mile bike trip around the globe. So far, he’s spent over 46 consecutive days in the saddle, raising the bar for any “iron butt” rider out there. His goal is to completely circumnavigate, across six continents in less than 100 days – so far, it looks like he’ll be on track while making use of his Victory Cross Country Tour.Grizzly took off from North Cape (Nordkapp) in Norway after putting his European segment in the books. Now, he’ll head across Russia to Vladivostok. It’s a shame he won’t be spending time with these dudes, but If you’d like to see some of his adventures, check out the interesting shots below.Grizzly’s trip began during Daytona Bike Week back in March, leaving from Daytona International Speed way on the 11th. With hundreds of Victory owners and motorcycle fans waving him on, Grizzly fell in for one lap of the Daytona 200 road course before setting off around the world.Charging on down from Daytona Beach, he made the nearly 4,000-mile trip to Panama City in just over six days. That marked the completion of the first leg. From there, he set the compass due south and traveled all the way through to the tip of South America. Unfortunately, his Victory isn’t amphibious, so he boarded a plane to Australia where he spent another six days charging through the outback, from Sydney to Perth.In Perth he hopped on another plane, touching down in Cape Town, South Africa. Grizzly took a northern route, through the heart of Africa into Cairo, Egypt, jumping a ferry across the Mediterranean to Tarragona, Spain. The African leg of his trip took just over 13 days to wrap up. With a good portion of his trip knocked out, he set his sights on his homeland of Switzerland. In Zurich, dozens of friends and fellow victory riders waited to receive him.

“My travel from Cape Town north through Africa was largely uneventful, although I met many friendly and helpful people,” Grizzly says. “Europe was a pleasure and I was pleased to see so many friends along the route. However, leaving North Cape, I collided with a reindeer at 65 mph and with tears in my eyes had to release it from his tortures at the site of the accident. Prior to entering Russia, I stopped in Helsinki to have the bike inspected.”Grizzly made some pitstops in St. Petersburg and Moscow but with time running down on the clock, it was time to get a move on towards Vladivostok. What’s in store for him in the future? Seoul, Hanoi, Bangkok and Singapore. After he hits those areas, he’ll toss the ole Victory on another transport and reconnect with her in Anchorage, Alaska, wrapping up his journey where it all began, in Daytona Beach.As with any epic journey, some plans may have to change en-route. “We might see some route changes in Asia compared to the planned route due to customs and vehicle regulations as well as availability of quick transfers,” Grizzly says. “I am sure it will again be an interesting leg before I return back to the North American continent.”The right tool for the right job and quite frankly, as much as I love sport bikes, I’m not sure I’d want to circumvent the globe on one. Wisely, Grizzly opted for the practical while attempting the ridiculous and chose a Victory Cross Country Tour for his trip. His bike isn’t all that different from what you’d find on a dealer lot. The engine, chassis and all other critical components have remained untouched but when you’re going that far, you’ll need a little bit of customization in terms of seating.“Grizzly’s progress speaks volumes about his determination,” says Nate Secor, Marketing Manager for Victory Motorcycles. “He has been riding some tough roads in remote regions, so it also speaks to the dependability of his Victory. It has been fantastic to track this record-breaking journey and we look forward to his safe transition through the miles ahead.”Grizzly’s position is tracked via GPS as well as satellite tracking. And you might be curious about his air travel; while he’s onboard a plane, the stopwatch is paused. Once he’s back on the ground, it starts ticking again. So eating, sleeping, getting hassled by boarder agents, all of those things soak up time like a sponge and it all adds up.Grizzly’s total distance is scheduled to be approx. 62,000 miles. The current record for such a ride is 120 days.The current record holder finished the trip in 120. Grizzly’s route will see him put down over 62,000 miles, approximately, but I guess we won’t know until we see the odometer. However, I do expect this bike to show up on Craigslist with the description of “lightly used, highway miles only.”Visit GrizzlyRaceTeam.ch for an up-to-date schedule of his travels. Learn more about Victory Motorcycles or follow on Twitter and Facebook.