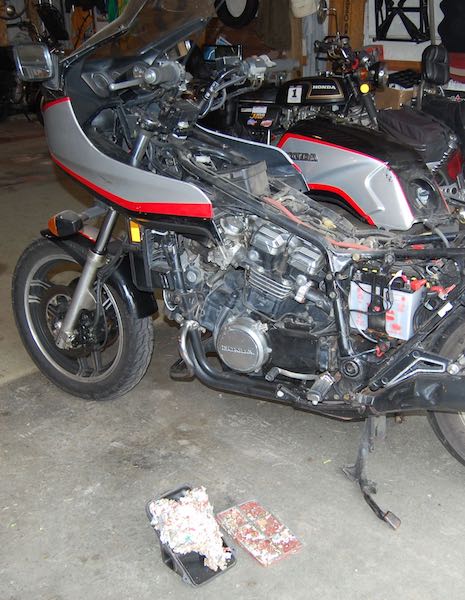 I am neither a particularly good motorcycle mechanic, nor a particularly meticulous one. I shouldn’t be in this fix, at least from the standpoint of being meticulous because I always keep a maintenance log on my vehicles.I guess the problem there is I may not be that meticulous about actually maintaining my maintenance log and doing all the maintenance on a given vehicle when it is due.Case in point: the long, long overdue air filter replacement on my 1984 Honda VF1100S V65 Sabre.By way of deflecting a tiny bit of blame for the deplorable lack of maintenance on this bike’s air intake system, I offer the following two excuses: first, I thought it had complete maintenance before I bought it. This excuse is weakened somewhat by the fact that I bought it back in 2011.Second, the air filter is in an air box buried under the huge gas tank and requires disassembly of half the darn bike just to get at it. The service manual advises me to remove the side covers, seat, fuel tank, disconnect the negative battery connection and then the fuel line, etc.

Not only that, but the service manual says the tank should not be full when the maintenance is attempted, so if you tend to keep the tank topped up after a ride, it is necessary to either take a nice long ride to burn off the necessary fuel or siphon it off to another container. Lots of work for a minor item like an air filter, no? 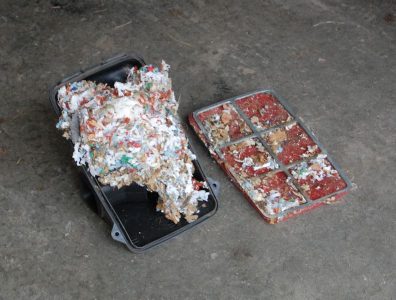 Of course, any reasonable person is going to opt to take a ride to burn off the fuel, which results in considerable time being consumed and by the time one returns to the shed, it’s too late in the day to start such an involved project. Many are the times I took the Sabre out for a long cruise with the sole good intention of returning to the garage later to do the air filter change. Well, we all know what they say about good intentions and the road to Hell.The job is a pain on Sabres that don’t have the optional factory installed bullet fairing, but my old Sabre has that fairing, which nearly totally blocks access to the two bolts that secure the front end of the fuel tank, which must be removed to service the filter. That promised to make the job longer, more difficult and more frustrating.All that said, days, weeks and on into years went by and for multiple reasons, the filter job just never got done. Besides, the bike seemed to run pretty well, so everything must be OK, or so I thought.All right, enough rationalizing. Fact is, when I finally got down to buying a new air filter and replacing the old one, I discovered things were far worse than I anticipated. 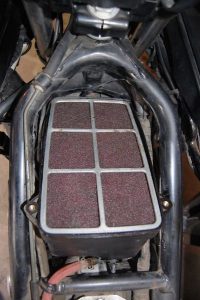 There is no explanation in any text I can find for the incredible affinity and ability rodents have for turning motorcycle air boxes into the perfect location for posh nesting places, but in this summer alone, I have found two examples that prove that affinity and ability exist.I’ve seen it before in old cars left sitting out in a field; air cleaner boxes stuffed with sticks, grass, bits of cloth, nuts, seeds, you name it. Then, this spring, I found acorns and other assorted seeds in the air box of my Honda VF700C when I changed its air filter.All that didn’t prepare me for what I found when I finally stripped my V65 and opened its air box. The box was packed completely with rodent nesting materials: bits of cloth, shredded bits of paper and plastic, cardboard, assorted seeds, twigs, you name it.The ancient foam air filter in place was embedded with bits of this stuff that it prevented from entering the clean side of the air box, but brown crud stuck to one side of the lower portion of the air box and the secondary air screen below the filter proved that some of the smallest particles of debris were sucked through. Ish.After cleaning the entire air box, oiling the new filter and putting it in place, I debated the options for rodent countermeasures. Putting a mouse trap inside the air box seemed an imperfect solution. Prevention became the objective and I fashioned aluminum screen material to form a block to the air intake holes on each side of the air box. 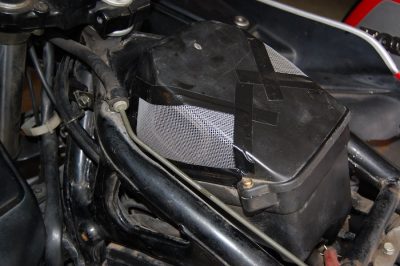 Whether they will be effective remains to be seen. Rodents are known to have the ability to gnaw through nearly anything known to man. The fact that they could find the air box and its openings and get themselves into the tiny spaces under the tank, not to mention hauling all that stuff in there proves that their abilities to infiltrate the impossible far exceed human understanding.Looking back on it, it’s something of a miracle that the bike would run at all. It may be that improved fuel economy, improved engine performance and reduced emissions may be the result of this maintenance. Now, having done this job once with surprisingly little frustration, I will be less inclined to put it off in the future.Another side benefit of the job turned out to be the discovery that the reason my electric gas gauge didn’t work was that it was disconnected. A dab of dielectric grease to smooth the connection and there it was—a working electric fuel gauge again!So, don’t do as I do, do as I say—perform that routine maintenance and don’t put it off or your bike may have nasty surprises waiting when you finally get around to it!