The 75th annual Daytona Bike Week has wrapped up. If you missed out on the festivities, there is always next year. One thing’s for sure – Indian Motorcycle certainly made its mark on the event.Between all of the organized rides, new and vintage motorcycle displays, unveilings and demo rides, Daytona Bike Week attendees had plenty of do while thanks to Indian. This year, the event was bigger than ever and Indian’s participation worked towards matching that enthusiasm.We have to think that Ed Kretz, the man who took the checkered flag at the first race on the Daytona Beach, would have been proud to see how far both Daytona Bike Week and Indian Motorcycle have come after 75 years.If you were at the event, some of this might be old news to you, but let’s just recap what all of us working schlubs who missed out. At the opening events, the new Indian Springfield was unveiled to the public. Running with Indian’s vision of combining classic styling and aesthetics with all of the modern amenities that we expect today can be found in the DNA of the Springfield.Following up with that heavy-hitter, many of us saw the limited edition Jack Daniel’s Indian Springfield and Indian Chief Vintage motorcycle models hit the market, which are now completely sold out by the way. Only 150 limited-edition bikes have been produced in conjunction with Brian Klock and his team at Klock Werks Kustom Cycles in Mitchell, S.D.There is still hope if you’re deadest on getting your hands on a limited edition Indian Chief Vintage; unit #001 will be auctioned off at the illustrious Barrett-Jackson Las Vegas on October 13-15 at the Mandalay Bay Resort but expect to pay far more than the going rate. It won’t be going to waste though; Indian has already found a home for those funds at Jack Daniel’s Operation Ride Home, a non-profit foundation which benefits U.S. Veterans. The Last of the run, #150 will be held onto by Brian Klock himself for all of his hard work and dedication to Indian Motorcycle over the years. 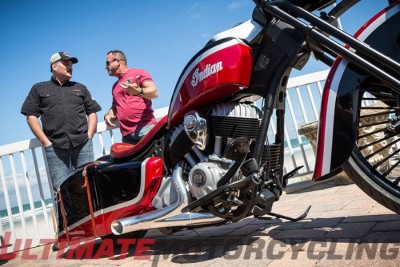 The 2016 Indian Springfield is already quite a looker but with the custom built Springfield’s making their way into Daytona, it certainly caused quite commotion. Daytona Bike Week goers were able to get up close and personal with the aggressive ‘Frontier 111’ crafted by Azzkikr Custom Baggers based out of Phoenix, Ariz. Builder Len Edmondson put everything he had into making this Springfield a truly one of a kind work of art.Remember Project Scout? The dealer contest which used the Scout as the base model for custom work? Well, if you’ve been following along then you’ll know the results that were announced at the Boot Hill Saloon at Daytona Beach’s Main Street. Over 40 custom submissions came down the line, narrowing things down to three finalists.When the dust settled it was the Boardtracker built by Motos Illimitees of Terrebonne, QC, Canada who took home both the judges trophy, as well as the Editor’s Choice Award. US dealers weren’t left out in the cold on this one; The Fusion, built by Motorcycle Charlotte of Lowell, NC, won the Fan’s Choice Award and following that up, the Ol’ #71, constructed by Heritage Indian Motorcycles of Northwest Arkansas took home the Roland Sands Builder’s Choice Award.Things got pretty interesting as Indian returned to their roots on the track with the help of Roland Sands and the Roland Sands Design SuperHooligan Indian Scout Sixty dirt trackers duked it out at Volusia Speedway Park. Stevie Bonsey claimed a victory on his first ride of the SuperHooligan SuperHooligan Indian Scout Sixty dirt tracker, followed up by Sean Guardado in 2nd and Aaron Frank claiming third. All were aboard the SuperHooligan SuperHooligan Indian® Scout® Sixtys. 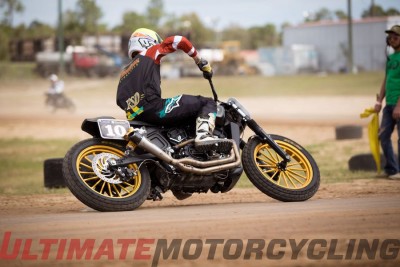 After the fun got finished, Indian and RSD got down to the real business as hand. At Daytona International Speedway, Team RSD Indian riders made their presence known. The man himself, Roland Sands took first, with Jamie Robinson in 2nd and Cameron Brewer in third. If you’d like to see these bikes in person and happen to be in Austin, TX on April 8th, be sure to check out their stop at the Hand Built Show.Bike week is more than just bikes. It’s about talking with other riders, trading tips and allowing you, the consumer and rider to learn more about the machines that power our lives. Indian was happy to do all of that with their display at Daytona International Speedway’s Midway area. New bikes, engine cutaways, symposiums with designers and engineers, along with a whole host of accessories and apparel could be found there. That’s one of the joys of checking these events out, you’re able to peer into the industry and interact with the men and women who built it.Just a few steps away, Indian made good on their promise and had the whole 2016 fleet on hand for customers to test ride and enjoy. The result was a record-setting number of demo rides for the brand, that included the all new Indian Springfield. Staff were on hand to answer any questions from financing to accessories and everything in-between.Late in the week, the Indian Motorcycle Riders Group joined up with members of the Veterans Charity Ride program. A motorcycle therapy-based ride from Los Angeles to Sturgis that first cropped up last summer. Rolling out of Orlando for lunch, riders fell in line with Sean Carroll, a veteran Marine who rode his custom Indian Scout Trike built by Champion Trikes and had finishing touches put on by Lloydz Motor Workz. 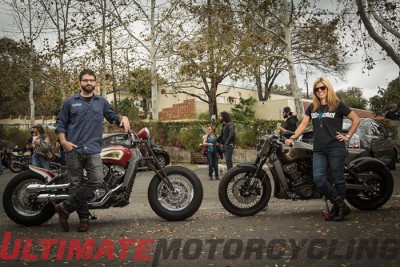 Indian ended the 75th Anniversary of Daytona Bike Week right, hosting a “Celebration of the 75th at the Boot Hill Saloon. Fans poured in from the streets and were met with Indian, new and vintage lining the venue for everyone’s perusal. Custom builders such as Len Edmondson, Kyrstal Hess and Nick Jaquez were on hand to talk about all of their fine custom work. Edmondson fielded questions about his ‘Frontier 111’ while Hess and Jaquez proudly displayed their submission for the www.IndianMotorcycles.net “Guy vs. Girl Indian Scout Build-off.” Voting was done on site and it was down to the last ballot cast; Hess won the event with “Sport Scout” over the ‘Scarlett’ bobber built by Jaquez.“The history of Indian Motorcycle is part of the very sands of Daytona Beach,” said Reid Wilson, Marketing Director for Indian Motorcycle. “The entire Indian Motorcycle team worked hard to pay tribute to that legend, and to help our newest fans experience the stories and lean into the future of this great brand.”Learn more about Indian Motorcycle and its activities by visiting Indian Motorcycle and Facebook, Twitter and Instagram.