Since the Polaris Industries takeover in 2011, Indian Motorcycle has continued to expand its bike lineup. The revival of the brand that has roots back to 1901 started with the expected Chief lineup, which included the Chief Classic, the Chief Vintage and the Chieftain. Indian continued this revival trend with the release of newer models, including the touring Roadmaster, the Chief Dark Horse, and the one we fell for quickly, the Scout.

With an MSRP of just under $11,000, the Indian Scout created an entrance into the iconic brand for almost anyone. But Indian has created yet another entry-level motorcycle, this one even more attainable due to its $8,999 MSRP – meet the Indian Scout Sixty. This price point rivals other entry-level cruisers, including the Harley-Davidson Sportster 883 and the Star Bolt.

Unveiled at EICMA Milan Motorcycle Show, the new Scout Sixty shares the chassis, suspension and brakes of the Scout, but arrives with a new 60 CI (999cc) V-twin that produces 65 ft/lbs of torque and 78 horsepower (Indian Scout arrives with  a 60-degree 69C  CI – 1133cc – engine that produces 100 horsepower). Unlike the Indian Scout’s six-speed gearbox, the Indian Sixty features a five-speed transmission. The bike, which weighs a cruiser friendly 542 lbs. dry, features a low center of gravity that provides agility, and a 25.3-inch seat height that assures flat flooted stops.

As for colors, the Indian Scout Sixty is available in traditional Thunder Black, Pearl White or Indian Motorcycle Red, and a host of accessories are available, including some designed by the legendary Roland Sands. 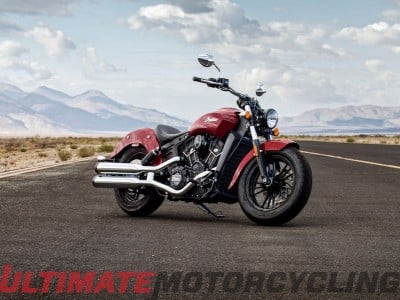 “The Indian Scout has been a stunningly successful introduction for us, with balance, performance and maneuverability that appeals to riders here in America and around the globe,” said Steve Menneto, President of Motorcycles for Polaris Industries.

“The new Indian Scout Sixty expands that reach even further to include newer riders who desire the legendary quality and craftsmanship of an Indian Motorcycle.”

When Roland Sands gets involved with anything, the fun factor usually gets cranked. Besides creating a line of custom parts for the new Indian Scout Sixty, he has also designed five bikes to compete at this year’s “Super Hooligan Race,” the Superprestigio of the Americas November 21.

“We expect the Scout Sixty to accelerate the already unprecedented success we have had with the new Scout platform,” said Indian Motorcycle Marketing Director Scott Meek. “The custom community has really embraced the Scout and we have experienced intense enthusiasm from DIY customizers, dealers, pro-builders and the aftermarket.”

For additional information about the Indian Scout Sixty and the Scout visit www.indianmotorcycle.com.

0
The new top-spec 2020 Triumph Thruxton RS is the latest addition to the British marque’s storied line, which also includes the standard Thruxton and...
Read more
News

0
The connection between bicycles and motorcycles is intrinsic—a link as secure as bacon and eggs, the pope and robes or cake and icing, in...
Read more
Cruiser

0
With the trail bike market heating up as we enter a new decade, approachable off-road motorcycles are just the thing to entice new riders...
Read more
Cruiser