Since its debut in 1959, the Triumph Bonneville has symbolized the heart of British motorcycling. Triumph said the original Bonneville delivered “the highest performance from a standard production motorcycle.”This performance attracted many of the world’s most iconic American celebrities, including actors James Dean, Steve McQueen, and Clint Eastwood, and musicians such as Bob Dylan.The legend continued, keeping its iconic flare throughout the 21st Century. But even icons have to be reborn, and this is just what happened. Meet the 2016 Triumph Street Twin, one of five new Bonneville models released including the T120, T120 Black, Thruxton and Thruxton R.The Street Twin proves that the youthful spirit has never fled from the Bonneville soul, the new bike taking over the reigns of the previous-generation Bonnevilles. The Street Twin arrives with the smallest engine of the new five-model lineup, the bike featuring a 900cc twin that produces 18-percent more torque than the previous 865cc Bonneville motorcycles. The others in the 2016 Triumph lineup – the T120 and Thurxton models – arrive with the equally as new 1200cc twin. And all engines are now liquid cooled, though the fins on the engine cases still help cooling at speeds.Match this with modern-day technology such as ride-by-wire throttle, traction control that can be switched off, ABS, and a slip-assist clutch, and the 2016 Triumph Street Twin has truly helped initiate the Hinckley company’s new tagline: “Bonneville. Reborn.” 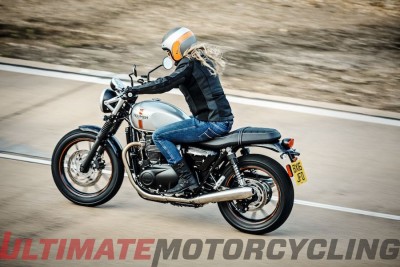 And though the original spirit has never fled from that Bonneville soul, the new Street Twin was completely redesigned. It features not only the new 900cc “high torque” engine, but also a new chassis and suspension, and a lower seat height and refined rider triangle that caters to a wider range of riders – especially the newbies.Powering the Triumph Street Twin – mated to a six-speed transmission – is the all-new eight-valve, parallel-twin engine that produces 59 ft/lbs of torque at 3200 rpm. The engine, delivering 18 percent more torque than the previous 865cc engine that arrived in the 2015 Bonneville lineup, should be the more streetable engine; the previous 865cc engine produced just 50 ft/lbs of torque but at much higher revs – 5800 RPM.The Triumph Street Twin’s liquid-cooled engine – having a 270-degree smooth firing order – arrives with a new ride-by-wire system, which allows for smoother throttle response and a traction control (one level). The engine, along with it’s redesigned upswept stainless-steel exhaust, delivers 36-percent better fuel efficiency compared to the previous model. Regarding the liquid cooling, Triumph’s lead engineer was asked about the percentage of liquid cooling, but there was no direct formula – the engine is a mix of air and liquid cooling, and the engine fins were designed to provide further cooling at higher speeds.The chassis was also tweaked and provides more travel, and is said to provide better handling in both urban and highway situations. The Triumph Street Twin’s suspension upgrades, combined with the lower seat, a redesigned seat with additional foam, and a more neutral riding position, is claimed to produce the “most accessible Bonneville ever.”This accessibility also combines with modern ABS (not able to turn off), something that engineers claimed was a must for the Street Twin – a Bonneville targeting entry-level riders that seek more than is offered in a Ducati Scrambler or Harley-Davidson 883 Sportster. 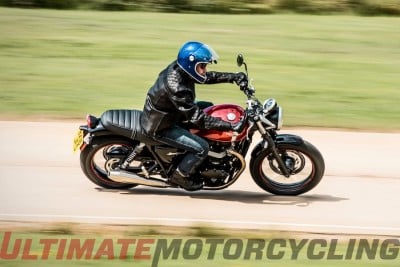 Triumph also offers a new range of accessories that allow for further personalization, including kits that are dealer installed and retain the factory warranty. The kits – some featuring Vance & Hines exhaust, the company now partnering with Triumph, include: