The Triumph Thruxton – named after the 500-mile Thruxton endurance race series in the UK – is synonymous with speed. During the 1960s and 1970s, the Triumph Thruxton was the member of the Bonneville family that offered pure performance.This bike quickly created a name for itself, especially after becoming the first machine to lap the Isle of Man TT Mountain Course at 100mph with Malcolm Smith at the controls in 1969.The Thruxton name naturally deserves respect, and Triumph did no disservice to the name with the 2016 Thruxton and upgraded Thruxton R. The new Thruxtons – part of a five-bike Bonneville lineup that also includes the T120, T120 Black and the Street Twin – are highlighted by the all-new liquid-cooled 1200cc parallel twinThe Thruxton’s eight-valve parallel twin delivers 82.6 ft/lbs of torque at 4950 rpm – this is up from the T120’s 1200cc engine that produces 77.4 ft/lbs at 3100 rpm, and up 62 percent over the previous generation’s 865cc engine that produced 50 ft/lbs of torque at 5800 rpm. And unlike previous models, the new 1200cc engine is mated to a six-speed transmission.Speaking of the Thruxton, Triumph says “This all-new ‘low inertia – high performance’ six-speed engine features a lighter crank, higher compression and unique airbox. With the pinpoint accuracy and instant throttle response of Triumph’s next generation ride-by-wire fuel-injection, fed by authentically styled twin throttle bodies, the Thruxton spec engine delivers a massive peak torque figure of 82.6 ft/lbs.” 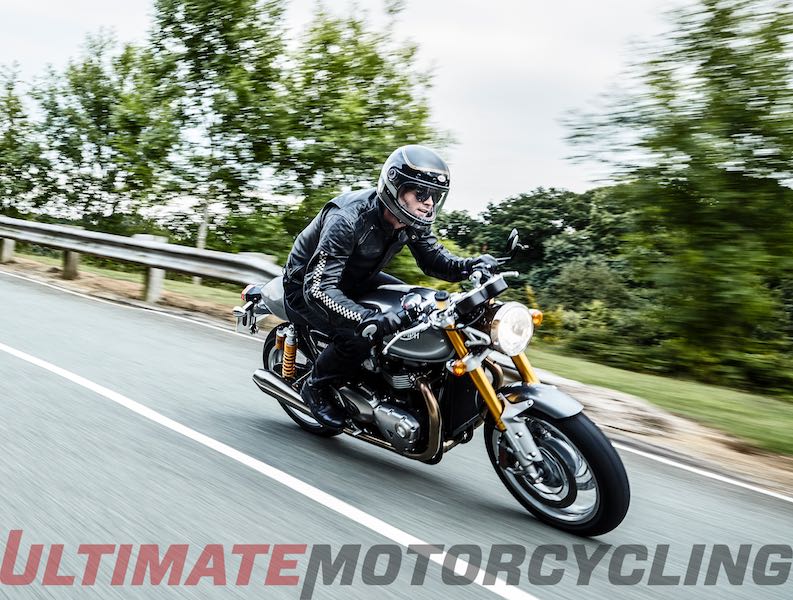 The new Thruxton, incorporating the new water cooling, features twin upswept exhausts with reverse-megaphone end cans. The Thruxton’s exhaust is finished in chrome, and the Thruxton R’s in brushed stainless steel.The chassis and suspension was also updated on the new Thruxton, and this performance is matched by styling from the clip-on bars, and 17-inch front wheel. The Thruxton R takes things one step further, and arrives with Brembo monobloc calipers, Showa big piston forks, Öhlins rear suspension and Pirelli Diablo Rosso Corsa Tires.Triumph is also offering a performance Factory Race Kit for the Thruxton R, which provides engine modifications for more power; the race kit is for closed-circuit competition only.As for styling, the Thruxton and Thruxton R builds upon the idea of the modern-day cafe racer. The lines are tight, and the fuel tank arrives with a “flip top” Monza style cap – a first for any modern production bike – an authentic bullet seat, bare-end mirrors.The Thruxton R also features a host of higher quality details with an additional painted seat cowl, amazing polished top yoke, aluminum tank strap and clear anodized aluminum swinging arm.Triumph has yet to release the price on the 2016 Thruxton and Thruxton R, but expect the price to be around $14,000.Following are the highlights of the 2016 Triumph Thruxton and Thruxton R: 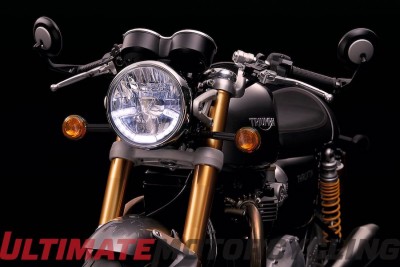 Triumph also offers a new range of accessories that allow for further personalization, including kits that are dealer installed and retain the factory warranty. The kits – some featuring Vance & Hines exhaust, the company now partnering with Triumph, include:

For the first time in Triumph history, the Hinckley-based manufacturer will offer a factory race kit specially developed for competition use on a closed circuit. Triumph says the Factory Race kit will take the standard engine performance to an even higher level, with more power, torque and lower overall weight.