Harley-Davidson has updated the Forty-Eight for 2016, and the result is a bike with improved handling to match the easy-going Sportster 1202cc Evolution motor.The most important changes for the 2016 Harley-Davidson Forty-Eight are right up front; the Sportster 48 gets beefy new 49mm forks (up 10mm from last year, and now with cartridge damping) with stronger triple clamps and a fork brace, improving the handling of the bike.Riding the Forty-Eight, the new front end it immediately apparent when putting it into a turn. The previous edition of the bike wasn’t bad, but this is a much more substantial feel, which improves confidence in the handling. The same excellent Michelin Scorcher 31 is used, with a fat 130mm width on a new 16-inch 9-spoke cast aluminum wheel (it replaces a traditional laced wheel).With the increased stiffness in the front of the bike, Harley-Davidson was able to tuck in the fork angle by 1.3 degrees, giving the 551-pound bike (claimed wet) more of an agile feeling, both in-town and on backroads.The back-end of the 2016 Harley-Davidson Sportster Forty-Eight also got some help. The rear shock still has a scant 1.6 inches of travel, but now the shock has a nitrogen-charged emulsion-style design, plus a variable rate spring and threaded preload adjustment. Without riding them back-to-back, it’s difficult to tell a huge difference, given the short travel, but it handled irregularities in the road well enough.Lean angle has changed a bit for 2016, with the touch-down point at a uniform 27.1 degrees. That increases the left side by a full degree, while taking away 0.7 degrees from the right side. Being a low-slung Sportster with a seat height of 28-inches, the peg feelers still hit the tarmac with some regularity if you’re even a slightly aggressive rider. 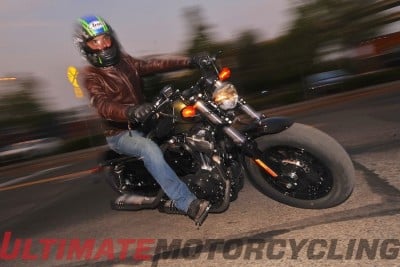 Encouraging sporty riding is the strong Evolution motor that puts out a tidy 71 ft/lbs of torque at 3500 rpm. This is real world power that is as useful when the light turns green as it is when the road turns twisting.Speaking of the set, the 2016 Harley-Davidson Sportster Forty-Eight gets a new solo seat. It’s comfortable, with nice support, even as the foot- and hands-forward ergonomics tend to give this bobber more than a bit of a café feel (the under-bar rear view mirrors add to this).Overall, the 48 could certainly be more inviting from a comfort standpoint, but with a 2.1-gallon tank that needs frequent refilling, H-D isn’t expecting you to go for long stints between off-bike breaks.The appearance has been changed thanks to new AMF-inspired retro graphics (except on the Hard Candy Custom versions), along with chrome exhaust shields with some old-school bobber-style cutouts (saving weight, naturally) and “1200” on the engine cases (replacing “5”). Plus, the air filter is now round and black. There’s also more black on the Forty-Eight than before, solidifying it as one of Harley-Davidson’s Dark Custom series.Overall, the changes to the 2016 Harley-Davidson Sportster Forty-Eight are not revolutionary, but they are significant enough to make it a better motorcycle for bombing through town late at night, as well as taking a fast stroll to the local tavern in the canyons.Photography by Riles & NelsonRiding Style: