Having a last-minute three-day road test of the new 2016 Harley-Davidson Road Glide Ultra gave me the perfect opportunity to experience what Harley touring is all about. I’ve tested a couple of the large touring bikes before, but have never taken a full-sized luxury cruiser tourer on a 1000+ mile multi-day trip. I can report that Harley-Davidson truly has it figured out.It’s great to see the Road Glide Ultra return after a short absence. Even better, of course, it that it comes back with the Project Rushmore updates that greatly improve its handling and utility. Getting the Twin-Cooled High Output Twin Cam 103 motor is icing on the cake.The Tour-Pak system is excellent, with its easy-to-use, One-Touch latch system on the side bags. The top box is huge and easy to load and unload; plus, it has a luggage rack on top of it. However, I’m not a big fan of the cylindrical key system, as it can be fiddly. Let’s not mention that I lost it on the first day, though I will say that I prefer an ignition key that stays in the keyhole when riding. I’m sure some people prefer the Smart Security System fob, but I’m not one of them.While the 2016 Harley-Davidson Road Glide Ultra is a physically large machine for someone of my size (5’ 6”, 115 pounds), it’s certainly not unmanageable or unduly intimidating. Yes, it’s over half-ton before you add anything to the bags, but most of the weight is low. The moderate seat height allows an easy flat-footed stance, and the Twin Cooled High Output Twin Cam 103 engine puts out gobs of torque. This creates a package I can control at slow speeds and stops, which are the only times the Road Glide Ultra might be overwhelming.First impressions always set the stage, and when you slide into the saddle you’ll appreciate how well it is designed. It may not have a backrest like the CVO version, but the catcher’s mitt style seat cradles you nicely, giving a supportive and secure perch that stayed comfortable for the 1150 miles I put on the 2016 Road Glide Ultra.The seating position is traditionally upright, with moderate height pullback bars and a neutral stance for your feet, which have a bit of room to move on the floorboards. For long stretches of straight-line droning on the interstate, highway pegs are a nice option to give your knees a stretch. 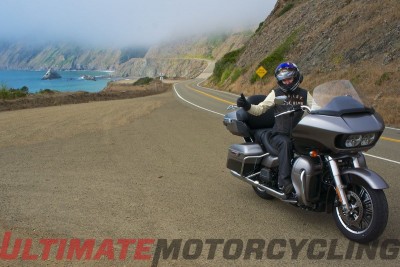 With a 29.7-inch seat height, it is two inches taller than the Electra Glide Ultra Classic Low, but I was able to easily get both feet flat on the ground – the new reduced-width primary housing pioneered on the Low tourers helps. That’s crucial for feeling in control of all that weight, as bringing the bike to a stop is when you’ll need the leverage of your legs to keep the bike at center balance. Speaking of which, pulling it up off the secure kickstand can be an effort if you haven’t stopped on flat ground, so plan ahead before parking.The deep and robust growl-into-rumble when pushing the starter switch does not fade away as you cruise down the road. A slight twist of the right grip acts like a volume knob, drawing any eyes that weren’t already looking your way. The Harley-Davidson mystique continues, always turning heads, eliciting nods of approval, and, when you’re stopped and have time to chat, comments and wistful expressions. That is certainly a healthy chunk of the H-D experience, riding a bike that even the non-riding public recognizes and admires.Getting underway is surprisingly easy. The 2016 Road Glide Ultra has a gently engaging clutch. You will pull away smoothly as long as you do so acknowledging the authority you expect from an engine that puts out over 105 ft/lbs of torque. This is not a bike to be ridden timidly. Respect its size and ride with appropriate confidence.The 6-Speed Cruise Drive transmission works well and engages with a healthy and precise clunk via the heel-toe shifter. Finding neutral at a stop can be challenging should you wish to take your arms off the bars and get away from the vibration of the rubber-mounted unbalanced motor, so either get that done before you roll to a stop, or be prepared to keep the beefy clutch squeezed tight.There’s all kinds of conspicuous quivering from the 1690cc V-twin motor at a stop, as expected, but that smooths out as the Road Glide Ultra picks up speed. Power is seemingly endless. I was able to fly up six-percent grades without downshifting for overdrive, leaving countless cars in my wake. When instant acceleration is needed on the highway, fourth or fifth gears are always there. Roll-on power is outstanding.Riding the 2016 Harley-Davidson Road Glide Ultra from Portland to Los Angeles gave me ample opportunity to put the bike through its paces. The first two days were along the Oregon and northern California coast, with winding two-lane roads up and down the mountains and along coastal cliffs.The bike’s prodigious torque allowed me to pick my way slowly through the tight stuff – there were some hairpins signed at 10 mph – slipping the muscular hydraulic clutch when necessary, and then rolling on that meaty power as I pulled out of the corners. The bike is amazingly agile once you’re moving more than just 5 mph, and once you’ve mastered the rear brake/throttle combination, you and the Road Glide Ultra will be best buds. 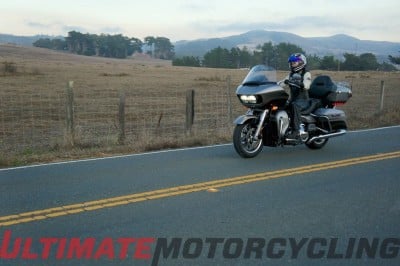 Cornering clearance is plentiful. I’m not timid about dragging pegs and floorboards, but I found that unnecessary on the Road Glide Ultra. I could lean as far as I liked and the Harley-Davidson Dunlops stayed secure and predictable.When the road opened up to rolling hills and gently curving miles along the bluffs, it was a true pleasure to ride. Speed is easily modulated by either rolling on or off the throttle, using the plentiful engine braking instead of touching the brakes.Thanks to the foot-pedal controlled Reflex Linked Brakes system that activates Brembo calipers that grab all three discs, should you need to shave speed sooner, there is a very usable amount of deceleration available and feel is quite good.Suspension is well dialed on the Road Glide Ultra. Over bumpy roads, transitioning pavement, cattle guards, and freeway speeds over unfamiliar bridges during busy Bay Area late night traffic, the bike soaked it up and never wavered. The Dual Daymaker Reflector LED headlights look great, but required the high-beam setting to give a secure view at freeway speeds.The 49mm front forks, courtesy of Project Rushmore, feel solid in turns, both tight and long sweepers, and handled the full speed drones without a quiver. Never too soft, but cush-enough to absorb the rough stuff, the Road Glide Ultra’s suspension is well balanced and provides an impressively comfortable all-day ride. There’s no wallowing in corners, and nasty urban potholes on the highway won’t jar you.The last day of my ride was down California’s Central Valley on Interstate 5, and this is where the Road Glide Ultra really shines— eating up miles of straight long roads without wearing out the rider. The bike barrels down the high-speed open road solid as a rock thanks to a fat footprint on the 17-inch Harley-Davidson Dunlop front tire creates a secure footprint all the way into the upper 80 mph range. Giving confidence to ride a heavy bike at speed is an ABS system that allows me to be aggressive with the foot pedal without worrying about locking up the wheels.The frame-mounted shark nose fairing cuts a good-sized hole in the windblast, directing a good amount it over and around the rider, the value of which cannot be overstated for any long-haul ride. In addition to airflow holes on each side of the headlights, the Triple Splitstream vent virtually eliminates head buffeting, which reduces fatigue significantly. I would probably opt for a slightly lower windscreen that didn’t cut across my line of sight, but I realize I’m probably shorter than the target rider for this bike. The seat is also excellent, and my butt didn’t get numb, even on days that took in 400+ miles and 10 hours of saddle time.

Electronic cruise control aids in keeping your hands fresh, is extremely easy to operate and works flawlessly. It’s also easier to manipulate the right-side joystick control of the Boom! Box 6.5 GT menu when you don’t have to keep the throttle grip twisted.There are a myriad of functions available through the dashboard menu, from navigation to communication, as well as the audio system; because it is so rich in features, you’ll need to spend some time getting familiar. I would like a higher-resolution screen, as the rough small lettering can sometimes be difficult to read quickly while riding.Putting in lots of miles on all sorts of unfamiliar roads is a great way to test the mettle of a new bike. The hugely improved 2016 Harley-Davidson Road Glide Ultra was worth the wait. It can take you from the tightest shoreline roads to the fastest straight-line open roads with confidence in both, and deliver you to each night’s destination eager to take on the next day.Photography by Don WilliamsRiding Style