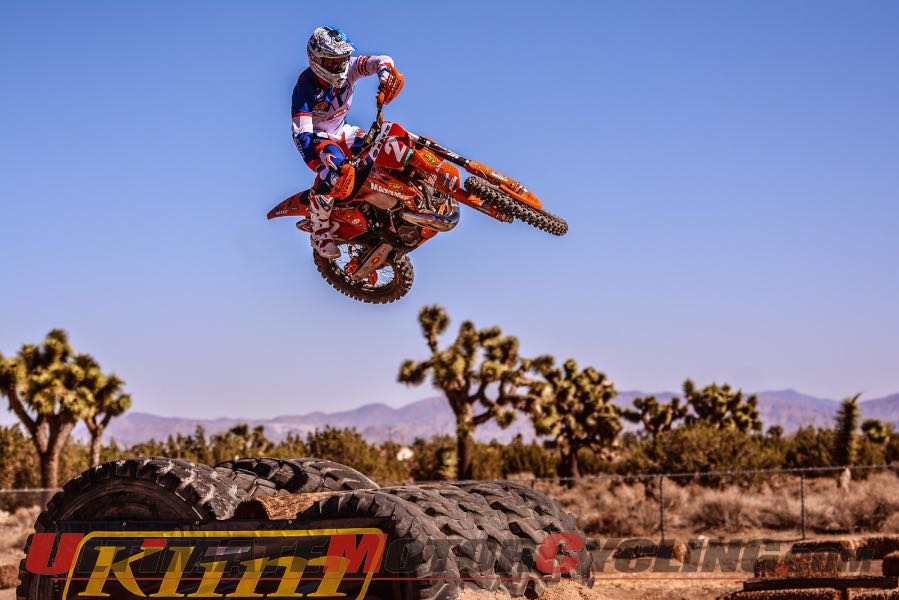 In just over a week, the 2015 GEICO EnduroCross Series begins at Ocean Center Arena in Daytona Beach during the 74th edition of Daytona Bike Week.And one rider that’s amped to defend his EnduroCross title is Cody Webb. But the Motorcycle Superstore/Bell Helmet supported rider has a few challenges ahead, considering he will compete on a new bike with a new team.Webb spent his previous EnduroCross seasons with Beta, finishing runner-up to KTM’s Taddy Blazusiak in 2012 and 2013. Last season, though, he secured nine-consecutive podiums – including three wins – to earn his first-ever title.But things will be much different in 2015 as Webb vies for points with his new team/bike, the RPM Racing KTM team. Ahead of the season opener at Daytona, Webb discusses his thoughts on the upcoming season.Q. The opening round of the GEICO EnduroCross series is in a new venue this year – Daytona Beach, Florida. Are you ready? Are you healthy?Cody Webb: Yes I am one hundred percent ready coming into the series. Racing the FIM SuperEnduro series has really prepared me for the upcoming 2015 season. I have remained in race shape and am ready to battle. I have increased workouts and have been very mindful about eating habits to be in tip-top shape.Q. You switched up your entire race program from last year… You’re with a new team on a new bike, how’s that working for you?CW: It was very difficult to make the final decision after a few successful seasons with Beta, but I felt it was time to take the step in a new direction. It has been a big change to add on new sponsors and become a member of the RPM Racing Team on a KTM. The support from both the team and KTM has been top notch. I spent the previous two years on the 2-stroke with great success. I will be riding a 2-stroke in the 2015 series as well.Q. You’ve had a busy off-season, if you can call it that, racing the World SuperEnduro series. Is that a good way to prep for the GEICO EnduroCross series?CW: For sure, I have been really busy; on top of racing the FIM SuperEnduro series, I’m two semesters away from finishing off a very difficult achievement, a Mechanical Engineering degree. Being in school and racing the FIM series has kept me on track and provided me with a good weekly schedule between training and studying. It will be good to line up at Daytona without jet lag and with a lot of similar races under my belt. The intensity of the SuperEnduros is very high, and great training for the AMA series.Q. You beat the former champion, Taddy Blazusiak, heads-up last year and it sounds like he will not be racing the series this year, so who do you see as your biggest competitors for 2015?CW: I think all of the racers will be great competition. I think everyone has the potential to run up front and I’m sure everyone has put in a lot of hard work during the off-season. I finished on top last year and I know there’s always room for improvement. I put a lot of pressure on myself to be the best at my abilities.Q. You get to carry the #1 plate on your bike all year, but what about that target on your back? Do you feel the pressure from these guys who are gunning for your title?CW: Of course there is a lot of pressure on my back, but at the end of the day, I’m on the same level playing field as my competition. We have all been training hard with the same goals. I can only hope I’ve put in more hard work to achieve my own personal goals. I put more pressure on my own back compared to others.Q. You have been training and racing with your teammate Ty Tremaine a lot this year. That has to be a good situation for Ty, how has it been working for you?CW: I have really enjoyed being a teammate/mentor to Ty for the 2015 season. It has been a lot of fun and we have spent a lot of time testing and training together. He has a great supportive family, which helps him to enjoy what he loves. It has worked out great for me as well. Ty and I are both well above average height for this sport, so we share a lot of the same feelings on the bike and can discuss our strengths and weaknesses during motos.Q. What other sponsors do you want to thank?CW: I want to thank the RPM Racing Team for giving me the opportunity to further my career racing goals. I also want to thank my individual and team sponsors: KTM, FMF, Maxxis, KLIM, WP, Motorcycle Superstore, Bell Helmets, Rekluse, Sony Actioncam, Protaper, Motorex, Rad Manufacturing, SIDI, TM Designworks, HBD Grafx, DVS shoes, DANCO, Alexander Exhibit, GEICO Powersports, Motion Pro, Shorai, ARC, and SpecBolt.