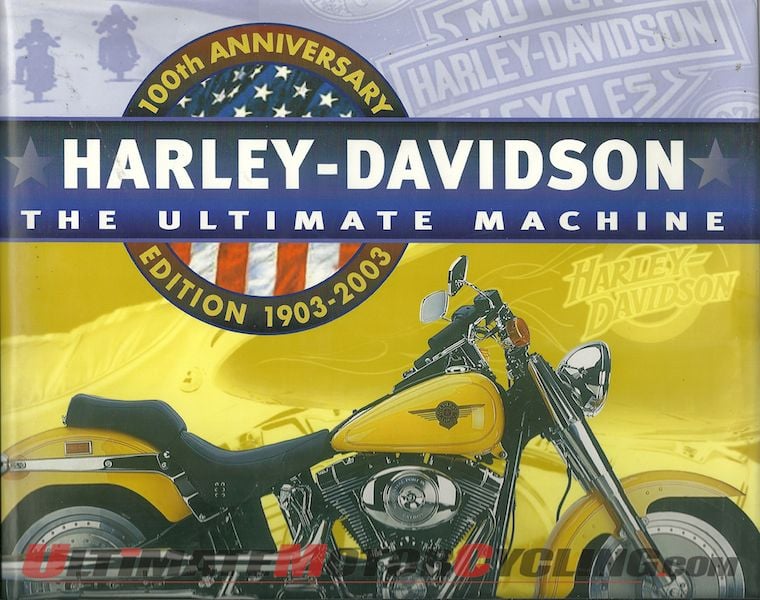 Rider’s Library Retro ReviewHarley-Davidson has a big legend, a big name, a big fan base, and a raft of big books about it. Tod Rafferty’s book, Harley-Davidson the Ultimate Machine, 100th Anniversary Edition 1903-2003, is one of them.Of course, there is no way to do a book about a story as sweeping as that of the Harley-Davidson Motor Co. in anything but a big book. Those enthusiasts who intend to collect books about Harley-Davidson are advised to have bookshelves that are as substantial and stout as Harleys are themselves. In the case of Rafferty’s book, it stands a foot high, 11 inches deep and an inch thick.The book is divided neatly into only five chapters containing its 176 pages. Each chapter covers an era in Motor Company history: The First Years 1903-1929; The Middle Years, 1930-1959; The Swinging Sixties, 1960-1969; The Latest Years, 1970 Onwards (through its publication year 2002); and The Milwaukee Milestones.Throughout those chapters there is a mix of contemporary and historic images, many of which span two pages to show remarkable detail. In the accompanying narrative, Rafferty also provides detail on some of the business operations that led to advancements and reversals as well as the tactics that helped the company survive hard times.Among those practices, encouragement by H-D to its dealers not to sell or service any other brands of bikes or products in the fifties. Later, facing ever-increasing competition from imports, Harley worked to get higher tariffs placed on import bikes, but that did not succeed at first. Some protection in the form of higher tariffs did not occur until the mid-1980s.For history trivia buffs, the book includes a great source of information in its closing pages called “The Milwaukee Milestones.” Year-by-year, the key events in Motor Company history are lined up.Rafferty does make a few side trips into movies like “Easy Rider,” Sturgis, Daytona Bike week, customs and racing bikes, but in the main, the book stays focused on the Harley-Davidson product and the many aspects of it that make it as Rafferty’s title suggests: the ultimate machine.Book Data:Note to readers: many of the books that we’ll feature in Rider’s Library may be out of print and some may be difficult to find. That could be half the fun. The Internet should make the search relatively easy but ironically, none of the books currently scheduled for eventual retro-review for the Rider’s Library section were found with the help of the Internet. They all were found at book stores, used book stores, antique shops, motorcycle shops, yard sales and so on.