Home Motorcycle Types Adventure / Dual-Sport Touratech Tips | Quinn Cody Teaches ADV Body Position (Video)
Facebook
Twitter
Linkedin
Pinterest
Email
Print
WhatsApp
ReddIt
Quinn Cody Teaches ADV Body PositionQuinn Cody knows his way around off-road motorcycles. The American’s list of achievements prove this; he’s a four-time Baja 1000 champion, three-time Baja 500 champion, the only rider to ever win the Vegas To Reno solo, and the 2011 Dakar Rally Rookie of the Year.Cody, who continues to compete in Baja Rally races and the Dakar, spent some considerable time with the Touratech-USA crew throughout 2014. During his time, he not only fascinated the crew – he also offered much riding advice.Some of that advice pertained to body positioning while adventure riding, which Touratech-USA highlights in its latest “Tuesday Tips” YouTube series. In the video, Cody pilots a Touratech-equipped KTM 1190 Adventure.The video is attached above. Following is also a transcript of the video featuring the General Manager of Touratech-USA, Paul Guillien.Paul Guillien: I’ve been lucky this year. I got to ride with Quinn Cody a number of times and he’s been giving me some riding tips along the way and I wanted to share those riding tips with you to help make you guys better riders, the way he has with me. So, Quinn, we were riding down in Wickenburg, Arizona for one of the BDR fundraisers and you were watching me riding, you gave me some tips that related to body positioning. So, why don’t you tell the viewer’s sort of what you told me to do and why.Cody: The first thing I noticed with Paul is that he seemed to have a really uncomfortable position on the bike. He was crouched down, his hips back, and he looked really like he was using a lot of energy as he was riding the bike. Somewhere along the line someone probably told him that he needed to be kind of in an attack motocross style position when he was riding off road. He was doing this all day long. After 20 minutes of this, he’s worn out, his and back’s burning.So all I really showed him was to rotate your hips forward, lock your legs, and relax on the bike. You know, he doesn’t have any pressure on the handle bars. He can take his hands off. He’s totally comfortable there. So that’s it. That’s a big thing for a guy who just wants to ride down gravel roads all day long and conserve energy. As you’re climbing a hill when you’re accelerating, you want to rotate your hips forward over the bike, get your head slightly forward. That just helps to balance again. You have no pressure on your hands. You’re not gripping really tight. You’re not up on your handle-bars. That makes life a lot easier when you’re trying to ride all day long.Coming into corners, you just shift your weight back keeping your legs locked and you still want to have your head forward over the gas tank, but not too far. He’s in a comfortable position and he’s got his elbows out. He’s showing his proper riding technique here rather than the crouched, kind of scared position that he’s been riding with for quite a while.Guillien: Well, I spend a lot less energy now when I’m riding so that was a good tip, having your hips forward. I watch a lot of racing videos and you always see guys bent over so I really thought that you had to bend at the back and Quinn just taught me to stand in a straight line and it allows you to control the bike better.You spend a lot less energy and it just feels natural and it really helps not to put pressure on the bars. I’ve been guilty of gripping the bars too tight or being too far back on the bike and having to grip just to hold on and that really makes it a lot better on the upper body. It just feels natural and kind of effortless from your shoulders down. 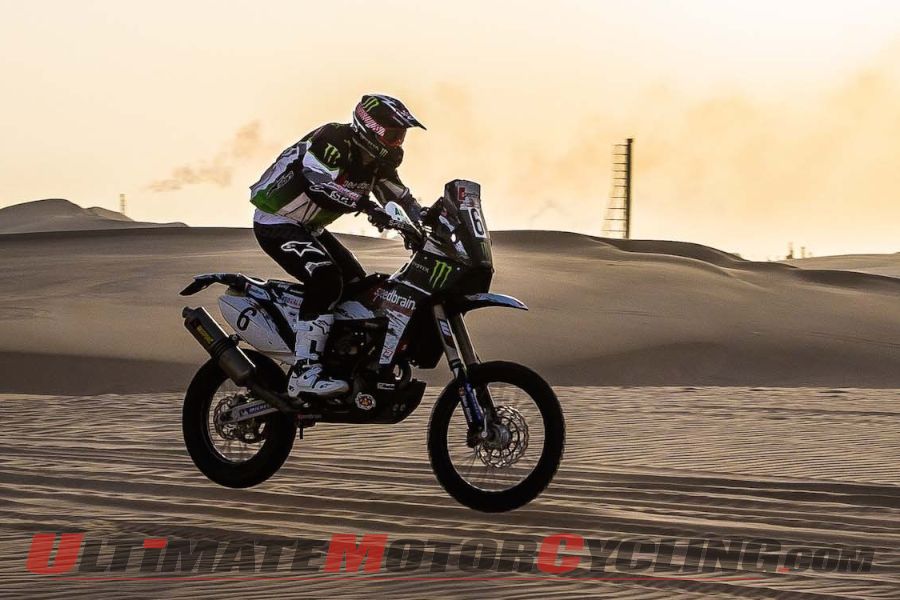