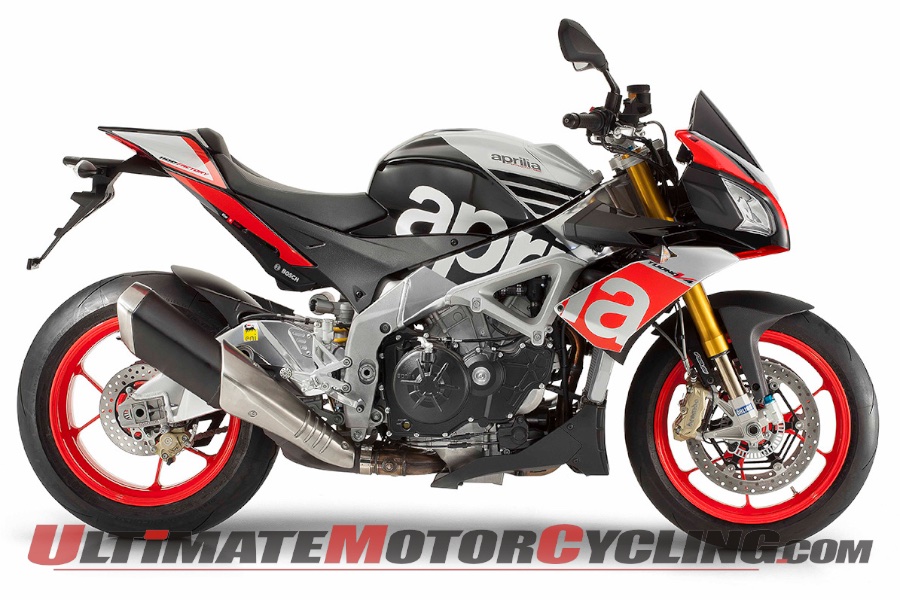 2015 Aprilia Tuono V4 1100 First Look Technical ReviewAprilia is bumping up the power and displacement for the 2015 Aprilia Tuono V4, but there is one catch for American riders — the two new versions of the incredible naked upright sportbike will not be imported into the United States until May 2015, and will be 2016 models. American 2015 Aprilia Tuonos will be the 1000 versions. That is disappointing, of course, but let’s take a look at what will be coming our way.The two versions of the 2015 Aprilia Tuono V4 1100 are the Factory and the RR, with the Factory being the upgraded version. Primarily, that means you get a few Öhlins bits replacing the Sachs equivalents.Obviously, the big news for 2015 is the boost in power and displacement (achieved through a three millimeter increase in bore in each cylinder). Not hindered by superbike racing rules, the Tuono’s V4 now displaces 1077cc and produced 175 horsepower at 11,000 rpm. The torque peak of 88.5 ft/lbs arrives 2000 rpm earlier.The peak numbers come 500 rpm earlier than on the Tuono 1000 V4, and you get an additional eight horsepower and six ft/lbs of torque. This should make the bike considerably faster in the real world of street riding.Aprilia has refined the Tuono chassis to work with the increased power. The rake has been tucked in 0.4 degrees (from 25.1 to 24.7) and the trail shorted by nearly a third of an inch to enhance agility, while the swingarm has been lengthened a quarter-inch to aid in stability.Aprilia continues to up the electronic ante, and you can install the V4-MP, the Tuono’s optional version of the Piaggio Multimedia Platform. It connects your Tuono to the web via your smart phone. Of course, you can also change settings on the bike using your smart phone, but the system is much more sophisticated than that.Here’s how Aprilia describes three of the V4-MP features:• Active electronic setup: This is as close as you can get to the “corner-by-corner” electronic management used in racing. Using the GPS feature of your smartphone, the system recognizes the position of the bike at any given time on the track and automatically changes the electronic adjustments (traction control, anti-wheelie, engine mapping, etc.), accessing a database of parameters recommended by Aprilia Racing. In any case you can set the electronic controls up according to your own preferences, turn by turn. This allows you to increase safety and effectiveness on the track, adjusting the control parameters at every point on the circuit and without distractions.• Immersive virtual telemetry: Your smartphone records the data from the engine and, using a sophisticated and realistic engine graphic, illustrates user performance. The lap reference is indicated by the “ghost” bike image and the performance relative to it can be downloaded to a database that collects all the laps made by Aprilia customers on each circuit.• Adaptive race assistant: This feature provides tips in real time to safely achieve your best lap on the track with your Tuono V4. Thanks to Aprilia Racing Department simulation technology, you can establish the ideal lap for each track, considering the various grip and rider skill levels. The application compares rider performance in real time and assists by immediately indicating the need to brake or the possibility of opening up the throttle.This is just the highest end of the Tuono V4s’ technology. There is plenty more to keep you fine-tuning your bike to perfections.Both the RR and Factory have these features:• Aprilia Quick Shift (aQS) uses electronics to allow you to shift without shutting off the throttle or using the clutch.• Aprilia Traction Control (aTC) has eight settings and is adjustable on the fly via a joystick on the left handlebar. Software has been upgraded for 2015.• Aprilia Wheelie Control (aWC) has three settings, with Map 1 being more aggressive than before, so you can always get a little air up front.• Aprilia Launch Control (aLC) is designed for use on the track only, and has three setting.• Race ABS with three positions, plus off. Level 1 is for track use, but can be used on the street, though it turns off Rear wheel Lift-up Mitigation (RLM). Level 2 is the standard road setting. Level 3 is for poor traction situations.The new headlight is more than three pounds lighter than the previous version, and the 2015’s fairing is more protective and aerodynamic. The 2015 Aprilia Tuono V4 1100s have a new seat that more than a half-inch lower than before, along with a narrower bars.The 2015 Aprilia Tuono V4 Factory gets Pirelli Diablo Supercorsa tires (the rear is bumped up to a 200mm width), and those same tires are optional on the RR.
Without any doubt, the 2015 Aprilia Tuono V4 1100 is a nice step up from its liter-bike predecessor. The only downside is that we have to wait until May 2015 to get it as a 2016 model.2015 Aprilia Tuono V4 1100 RR and Factory (note: Factory differences are inside brackets):2015 Aprilia V4 1100 RR and V4 1100 Factory MSRP: TBA