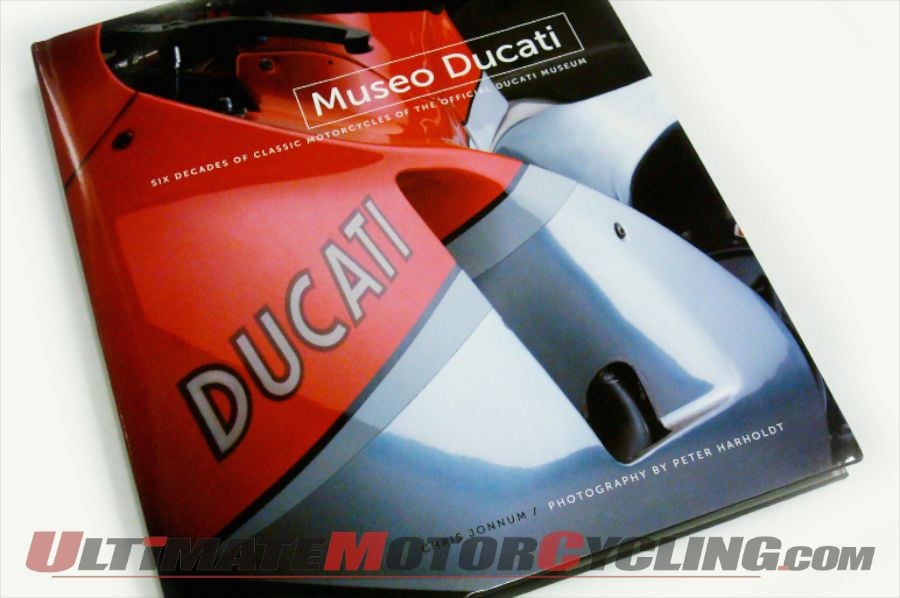 For the true Ducatisti, a visit to the official Ducati Museum in the Borgo Panigale section of Bologna is an absolute must.

I made this voyage during my honeymoon last year (yep, she’s a keeper). The only down part was the lack of my professional camera, which broke the night before under a wine-induced lens cleaning stupor in Venice.

This left me with only my iPhone 4s for pictures. But when all was over, images didn’t really matter – it’s the emotional memories that are important.

Plus, I have a copy of Chris Jonnum’s “Museo Ducati – Six Decades of Classic Motorcycles of the Official Ducati Museum” at the forefront of my motorcycle-literature collection, so visual images are always a finger-flip away.

Published by David Bull Publishing, the 144-page hardcover book – the size of a typical Coffee Table Book –  highlights 25 motorcycles from the museum, the bikes spanning six decades from the 1947 Cucciolo motorized bicycle to the 2010 Desmosedici GP10 piloted by 2006 MotoGP Champion Nicky Hayden.

Jonnum, a former MotoGP Press Officer of Ducati Corse and current Powersports Director of Dispatch Communications, provides an insider’s look at the models, offering historical details that continually pique the soul of a Ducatisti.

For example, when writing about my favorite bike in the book – the 1959 125 Desmo GP (a bike that represents Ducati’s earliest use of the now-signature desmodromic valve system), Jonnum provides input on the prancing black horse painted on the fairing.

“The prancing black horse emblem – now associated with Ferrari – originated with Francesco Baracca, the Italian World War I fighter ace who carried on his planes. Taglioni (Fabio, the designer of Ducati Desmodromics) borrowed it because he and Baracca shared Lugo di Romagna as their hometown.”

And what affect would such knowledge have alone? Jonnum’s text is supported by Peter Harholdt’s emotional photography. When shooting for the book, Ducati allowed Harholdt to use its Design Center – a room where many of Ducati’s latest machines were drafted.

Harholdt, who has photographed for iconic places such as the Smithsonian and the White House, captures the attitude of each bike in Museo Ducati – from the in-your-face image of Raymond Roche’s 851 SBK to the finer details of the 1972 Paul Smart Imola 750 Desmo.

Though the 25 motorcycles are the main subjects of Museo Ducati, the true essence of the book is found in the Forward and Introduction pieces by  Ducati Museum Curator Livio Lodi and Jonnum, respectively.  Much passion and history are contained in these few pages. 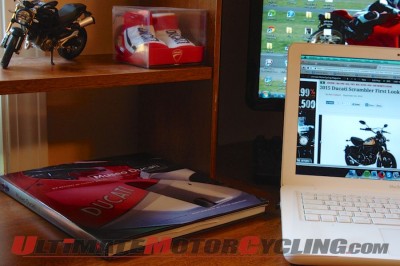 Just as a trip to the Ducati Museum is a must for the true Ducatisti, so is owning Jonnum’s Museo Ducati – an officially licensed Ducati product. My copy actually remains within arms length at my desk for those moments when the head needs to unwind.

At the end of Museo Ducati, Jonnum writes “Ducati’s pride in its products, heritage, and brand are palpable in the museum, and as most who have visited will attest, that passion is contagious.”

I concur, and Jonnum’s book allows me to build upon that passion from the comfort of my home here in Northeast Pennsylvania – 4,197 miles away from the Ducati Museum in Borgo Panigale.

For more on the Ducati Museum, visit A Honeymoon, Ducati Museo & Verona Via Multistrada – Perfetto! And don’t forget to visit our Rider’s Library, which is loaded with motorcycle-book reviews.