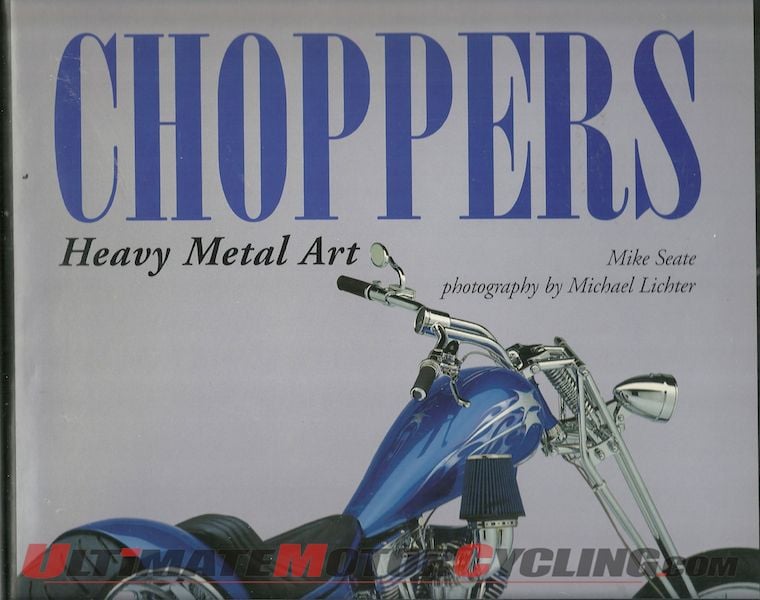 Motorcycle Library Retro ReviewFirst, a disclaimer: I’m not really a big chopper fan. In the realm of custom bikes, I lean toward café racers, bobbers and then choppers, and only those choppers that are actually road-going, functional motorcycles. As a result, I tend not to buy many books – new or used – about choppers.Mike Seate’s book, “Choppers Heavy Metal Art” is one of the exceptions. First, I’m a fan of Seate’s media work, the magazine he edits and founded, “Café Racer,” and the TV show he produces, “Café Racer TV.”Second, when I paged through his huge hardcover book (its 239 pages are a whopping 12” x 10.5”), I found it focused on work by some of the best builders in the world and was spectacularly photographed by Michael Lichter.Despite the title focus on the type of motorcycles the book is about, the book is really about people. Each chapter bears the name of a person—a builder — not just a set of motorcycles.Like a catalog of art by renown artists set for auction, Seate organized his book by the artist in metal. He lets Lichter’s studio and on-the-road images do the talking for the bikes themselves. In all, there are about 380 color images in the book.Seate organizes the builders by their relative status in the world of customs at the time—Section one is “Legends” like Arlen Ness, Indian Larry Desmedt, Donnie Smith and others; Section two is about “Young Guns,” like Billy Lane, Paul Yaffe and Rick Fairless among others; Section three is about “New Blood,” including Brian Klock, Roger Goldammer and Tom Langton.In telling us about the remarkable people who build these bikes, Seate helps us to appreciate their inventive skills and imaginative spirit as well at the influences that make their work what it is. But he doesn’t overdo it.Each builder gets a backgrounder, but there are vast expanses of images to enjoy and if you look closely, you’ll be amazed at the level of detail in paint, steel and chrome put into each machine and the clever combinations of antique bike design elements with modern equipment.Even if choppers aren’t to your taste, “Choppers Heavy Metal Art” may surprise you, hold your interest and find a place on your bookshelf.Book Data:Note to readers: many of the books that we’ll feature in Rider’s Library may be out of print and some may be difficult to find. That could be half the fun. The Internet should make the search relatively easy but ironically, none of the books currently scheduled for eventual retro-review for the Rider’s Library section were found with the help of the Internet. They all were found at book stores, used book stores, antique shops, motorcycle shops, yard sales and so on.