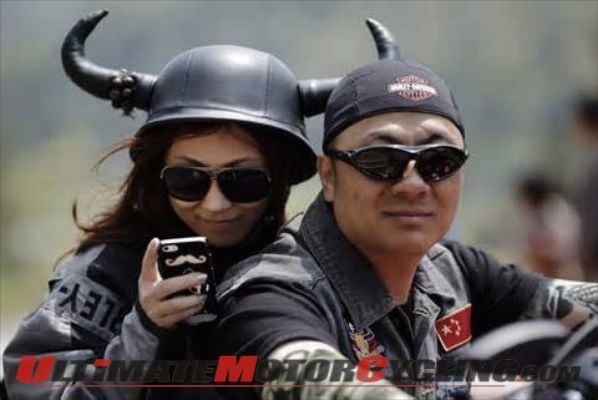 Chinese Riders Crave Motorcycle TourismIn recent years the new Chinese middle-classes have had a lot of thinking to do about how to spend their extra disposable income.After the performance car and villa have been purchased it seems that foreign holidays have raised high on the agenda. For many years it was difficult for the Chinese to travel outside of mainland China but now with increased freedom, achievable visa application and wads of cash the Chinese are traveling the world en masse.I’ve recently reported on the fast growing motorcycle for leisure culture in China. For many years the motorcycle had been regarded purely as a commuter or agricultural tool, but this is changing fast and motorcycle and custom clubs have sprung up in all of China’s cities (despite the ban on motorcycles in urban centers, riders take their bikes a few kilometers outside of town).China’s leisure motorcycle culture may be in its infancy but its growing rapidly and with it the motorcycle touring culture is evolving too as can be seen on any distance motorcycle ride in China.“Slash” Zhang has just completed a 35000-kilometer tour which has achieved the Guinness world record for “the longest motorcycle tour in one country.”He remarks “when we were touring we met literally hundreds of riders on their own tours. A lot of them were telling us that the ban on motorcycling in cities had a profound effect on them, especially those guys that had spent money on Harley-Davidsons, Ducati, MV Agusta and the higher end Japanese bikes.They were mentioning their intentions to take motorcycle tours in China’s neighboring countries like Laos, Cambodia and Vietnam as in China a motorcycle tourist is excluded from cities and also cannot ride on motorways, even with a big displacement motorcycle!”For the first time, this year’s CIMAmotor expo is dedicating a section of the show to motorcycle tourism. Such is the interest CIMAmotor is offering free exhibition stands to foreign motorcycle tourism companies wishing to exhibit.Jane Jia of CIMAmotor reported “at last year’s expo we were asked by many Chinese visitors of we had a section for tourism but unfortunately we didn’t. This year we want to provide our visitors with the choice of around 12 countries to visit and ride in, we are welcoming tour operators from all parts of the world. Many of the people asking us about tourism were government officials and middle-aged corporate workers sweltering in their suits and ties, not the kind of people that you associate with hitting the road in their leathers!”An indicator of the new passion for motorcycle touring has become evident in motorcycle parts and accessory markets. In motorcycle cities like Chongqing the selling of all things motorcycle related is concentrated in two huge moto markets and a change in the nature of shops there has been noted. Over the last two years there has been an influx of ‘outdoor pursuits’ equipment shops pedaling items such as tents, sleeping bags, gas cookers and all the equipment you would associate with a leisure trip.Hong Yadong is the proprietor of one such shop, he told me “I used to make my living from helmets, gloves and body armor, that kind of thing. I noticed (over the course of a few months) that I was being asked for camping and outdoor leisure equipment more and more; finally I began to ask the customers why they had come to a motorcycle market to purchase such items.“Every one of them told me that they had come to the market initially to prepare their motorcycles for a long tour, while they were here they inquired about the other gear they needed for the tour. It didn’t take long for me and many other shop owners to begin to furnish the tourists with their requirements, we’re not slow in adapting in China if it means making money!”Hong Yadong’s near neighbor continued “many of the shoppers were asking by name for western brands of camping and outdoor equipment, we had never heard of the brands but we started to stock Chinese equivalents. We all noted that if western equipment brands knew what was going on here they would be flooding in to take a slice of the market. It’s strange really that the consumers that we meet are happy to wear Chinese helmets and other safety gear which is in most cases inferior to western brands, but when it comes to something that doesn’t involve their safety they would happily splash out thousands of RMB!”Ma Lei of the Chongqing custom club chose Thailand for his motorcycle tour this year. “I didn’t take my Harley with me because of all the red tape involved in moving the beast to Thailand so I headed to a mountainous area called Chaing Mai. There are several tours available but I finally settled on a 2 day tour to the border of Burma, an excellent tour through the mountains with an overnight stop. One thing that surprised me was the amount of Chinese tourists queuing up to sign on!“I spoke to a few of them and it was clear that a lot of the guys were suffering a mid-life crisis and wanted to add a bit of action to their lives. The tour operator was perfect for the inexperienced rider as they offered small engine cruisers which were automatic and had a backup vehicle that could take care of any emergency. Most of the Chinese I spoke to at the brilliant market at the Burmese border told me that they would love to try a longer and more meaningful tour somewhere in the world, especially on a bigger and faster bike. They all vowed to pass there motorcycle tests when they got back to China! Lookout world, it’s only a matter of years until your country roads are full of Chinese tourists!”Report by ChinaMotor Magazine’s David McMullan