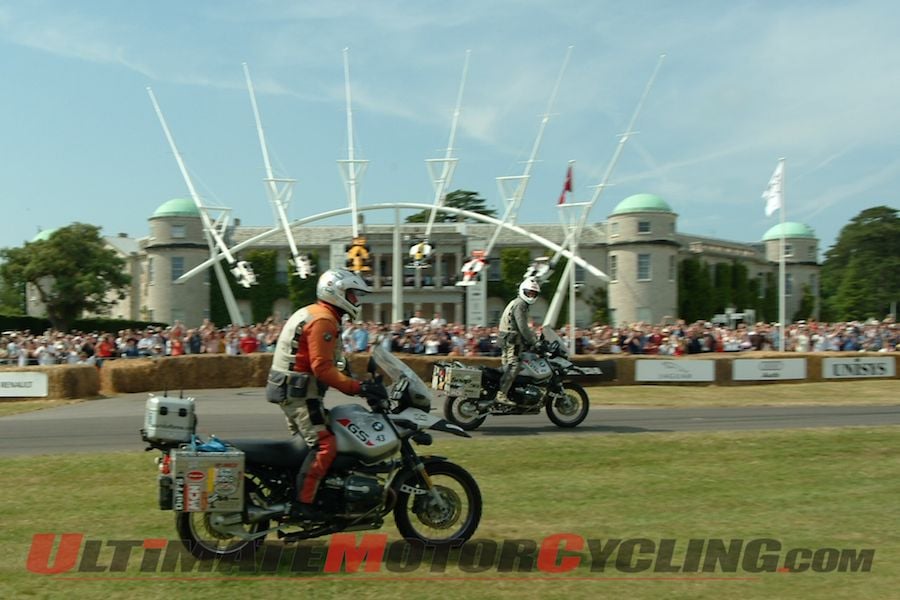 Goodwood HillclimbBMW riding adventurer Charley Boorman will be reunited with his famous R 1150 GS Adventure from the Long Way Round TV series at this year’s Goodwood Festival of Speed on June 26-29, 2014.Charley is celebrating ten years since the iconic round-the-world trip by taking part in the 1.16-mile Goodwood hillclimb.Also taking part is BMW Motorrad UK’s stunt rider Mattie Griffin, who will once again be thrilling the crowds as he performs stunts up and down Lord March’s famous drive on his customized BMW F 800 R. Mattie is one of the best freestyle stunt riders in the world and has been a favorite of the Festival of Speed crowds for a number of years.To see a video of Mattie performing at the 2013 Festival of Speed click here.Both Charley and Mattie will also be taking part in the regular Q&A and autograph sessions at the BMW Pavilion, which will also be home to a display of motorcycles including the BMW R NineT retro roadster, the S 1000 R performance naked bike and the cutting-edge HP4 supersports bike.Visitors to Goodwood can explore the BMW Pavilion and see a range of cars and motorcycles, as well as displays showcasing the brand’s advanced technology and rich heritage. For four-wheeled enthusiasts, the BMW Pavilion will include a number of high performance M-series cars and the ground-breaking i8 electric sports car.Additionally, BMW car and motorcycle and MINI owners will be able to access the exclusive BMW Owners’ Lounge on the first floor of the Pavilion by presenting their keys at the entrance.Whilst BMW guest drivers Alexander Sims, Tiff Needell and Steve Soper will all be aiming for a quick run up the hill, they will also be in the BMW Pavilion for interviews and autographs. They will be joined by legendary Formula 1 commentator, Murray Walker OBE, and by presenter for BT Vision’s Premier League football coverage, Jake Humphreys. Visitors with a culinary interest will also be in for a treat: the BMW Pavilion will also host one of the world’s best chefs, Jason Atherton, for a series of interviews.In addition to the machines on display at the BMW Pavilion, a number of high performance BMW motorcycles and cars will be taking part in the timed hillclimb on Lord March’s world-famous 1.16 mile drive.For more information or to purchase tickets visit www.goodwood.co.uk.