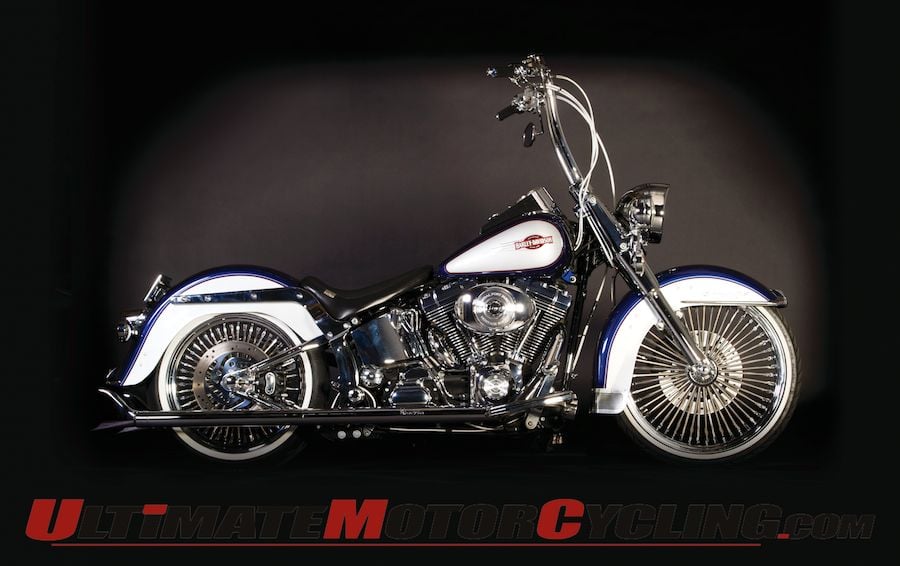 Custom MotorcyclesThe call to customize is as individual as the motorcycles we build. Often, external cultural components reflect themselves in the choices we make when turning a mass production motorcycle into an unmistakably distinctive personal statement.Johnny Villalvazo, a young man from the Hispanic enclave of Santa Ana, Calif., grew up with the lowrider and gangster cultures surrounding him. “What I first wanted was a gangster bike,” Villalvazo relates.Rather than being influenced by The Sons of Anarchy, he lives in the culture from which the show draws inspiration.However, when he began collaborating with builder Chris Dyer of Motowest Powersports Services in nearby Anaheim, Villalvazo’s taste went through a metamorphosis, and the result is something he describes as “a classier look.”Part of the driving force behind Dyer’s influence on the bike is Villalvazo’s commitment as a motorcyclist. He is not the sort of rider who cruises down to the local watering hole and considers that an authentic outing. Instead, he takes the Heritage Custom to destinations such as Laughlin, which means he is putting 600 miles in the saddle, roundtrip.“Johnny had specific ideas—the California Mexican low-rider look,” Dyer relates. “I always ask what they plan on doing. Show it? Ride it? Both? How far are they going to ride it? I find out their intentions. My objective is to make sure they’re happy with what they got and it’s functional for what they’re doing. The challenge was making Johnny decide what he wanted and not change everything. Based on his thoughts, I put this bike together.”Dyer’s method is a methodical one. “We do everything per measurement after working out the ideas of what they want. We make sure ahead of time that there are no fitment issues. We had little problems, but we weeded them out.”Local sourcing is an important part of the lowrider culture, and this Heritage Softail reflects that. “Johnny was all about Carlini Design bars because they are Santa Ana based,” Dyer says.“Johnny wanted 18-inch Gangster Ape bars, not 16-inch,” Dyer says. “But, because of his height, 16s fit better. 18s would have put his arms asleep pretty quickly.”Villalvazo concurs: “I wanted to go higher with the bars, but the curve of the 16 goes together well with the bike. I like the look of the curved bars. They have more style and you’re looking at something different. From the bars to the rims, it’s all pretty. It all complements specific features.”The DNA Mammoth 52-Spoke wheels are made a few miles away in Compton, furthering the commitment to supporting businesses in the area. “I was going to go for thinner spokes until I saw the fat ones,” Villalvazo explains. This choice led to coordinated details, such as the Magnum Sterling Chromite II throttle and clutch cables, as well as the front hydraulic line. The rear tire is a relatively narrow 150mm, keeping with Villalvazo’s desire for a functional bike.As a rider, Villalvazo wanted the Heritage Softail to still handle well around town and be usable for long distances. “It was slammed when I bought it,” Villalvazo says. “I took it into Chris and he convinced me to pick it back up. Everything rides great.”Dyer had to put in some work to make that happen due to some sloppy setup by the bike’s previous owner. “Johnny had a lowered setup when he came in,” according to Dyer. “The jam nut had broken out, and the shocks weren’t working. Someone ran the adjustment out and lowered it until there was no movement in the shock. We set it back to a shortened shock setup. You can take a stock shock and add an extension to lower it one-to- two inches and change the adjustability.” The result was one that satisfied Villalvazo’s senses of utility and style.One area that Villalvazo compromised for style over function is the custom LePera seat — made in North Hollywood — though he takes full responsibility for this. “For myself, it’s a little hard,” he says with a laugh, “but I like the way it looks so I deal with it.”The astute use of chrome and polish is what sets this Softail Heritage apart from other customs in the genre, giving Villalvazo the “classy” look he was going after.Orange County Plating in Orange (another local find) took care of the swingarm, while Al Reed Polishing near Motowest turned the brake rotors reflective. A number of Harley-Davidson chrome parts finished the job, along with the dual Samson 28.5-inch Fishtail mufflers. The Samson units were part of a light power and sound boost- ing process that included a Harely-Davidson Stage 1 air cleaner.The final result is one that meets the expectations of both Dyer and Villalvazo. “Everyone who has seen my bike likes it,” Villalvazo says proudly. “I’ve got nothing but compliments on every part. What catches me a lot is the paint, even though it’s stock, and the curve of the bars. I don’t know how to describe the look. It’s like having a gangster hardcore look, but the out- come is a little more classy.”Motowest Heritage Softail Specs:Story from the March/April issue of Ultimate MotorCycling magazine. For subscription services, click here.