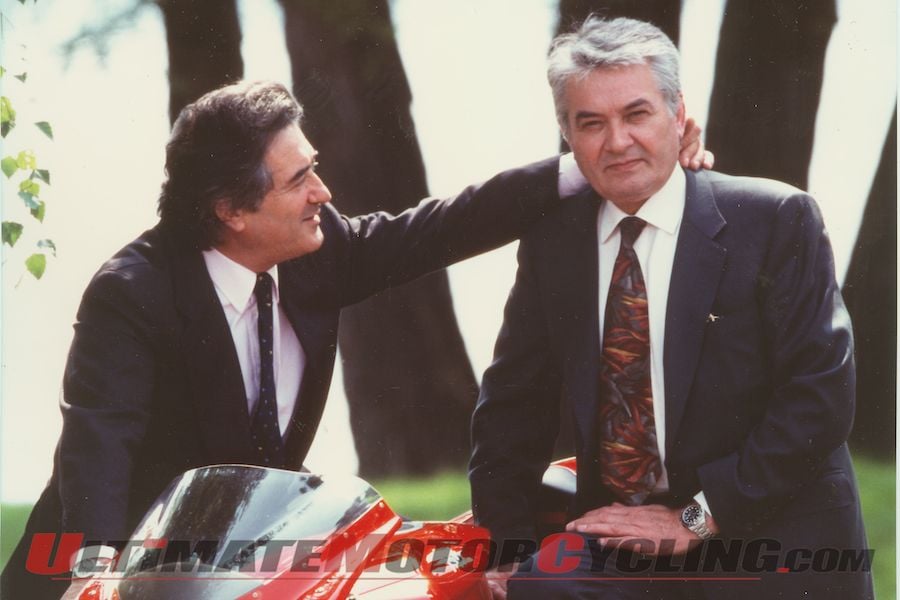 One of the world’s most famous motorcycle designers, Massimo Tamburini, passed away Saturday, April 5, 2014.Tamburini, born Nov. 28, 1943 in Rimini, Italy, was diagnosed with lung cancer in November 2013, and began undergoing chemotherapy. The San Marino resident’s condition got worse through the last several months, and he died Saturday at 70-years old.Tamburini is most known for designing two of the world’s most recognizable sport bikes – the Ducati 916 and the MV Agusta F4. His last designs were two modern Italian icons – the MV Agusta Brutale and F3 675.Tamburini began his design career in 1971, when he customized an MV Agusta 750 Sport. He took the 750 Sport, and revised it, utilizing a frame he welded himself.While designing air-condition ducts in 1973, Tamburini and partners Valerio Bianchi and Giuseppe Morri began Bimota – a “portmanteau” that uses the first letters of each partners last name (Bi, Mo, Ta). Bimota began building motorcycles that utilized engines from Honda, Kawasaki and Suzuki. Tamburini left the company 11 years later due to a falling out with Morri.The motorcycle industry was about to change, though, when Tamburini joined in 1985 the Cagiva Group, founded by Claudio Castiglioni. Cagiva, which owned Ducati in 1985, continually developed new and innovative motorcycles that have influenced the direction of the Italian and world motorcycle markets through the 1980s and 1990s. Just like Tamburini, Castiglioni also passed away from cancer (Aug. 17, 2011).Tamburini, who would become the head of the Cagiva Research and Development department,  designed both Cagiva and Ducati motorcycles. His first design was the Ducati Paso 750, the name in memory of his friend and Grand Prix racer Renzo Pasolini, who died while racing at Monza in 1973. The Paso broke from Ducati’s race-influenced F1 styling, and brought full bodywork mainstream.But it was in 1994 when Tamburini would drastically change the look of all sport bikes going forward. This is when the 916 was born. The 916 featured bold, streamlined styling, a single-sided swingarm and a second-generation Desmoquattro engine.In 1996, Ducati was sold to the US-based Texas-Pacific Group, but Tamburini stayed with Cagiva. From here, Tamburini began designing MV Agusta motorcycles (Cagiva bought MV Agusta in 1991).Tamburini would design the F4, a sport bike that was released in 1997. The F4 series was a success, and in 2005 MV Agusta released the F4 Tamburini 1000 – a special model named after its famed designer. Tamburini continued with MV Agusta, and his last creation was the Brutale and F3 675.Tamburini helped shaped the world of modern sport bikes, and will be sorely missed by all those in the industry.Giovanni Castiglioni, son of Claudio and President of MV Agusta, sums up Tamburini beautifully: “Massimo Tamburini was one of the legends of the motorcycle industry. I want to remember his passion, enthusiasm and determination. He was a great designer, but above all he was truly passionate about motorcycles.“He left our company a precious heritage and will always occupy a place of honor amongst motorcycle’s all time greats. His name will go down in history for his ingenious intuition and perfectionism applied to every small detail.”