Two things are simply synonymous with Daytona Bike Week – the Harley-Davidson brand and sunshine. But only one of these was present for the launch of Harley’s newest model, the 2014 Low Rider. And of course the brand wasn’t missing…Under thick clouds and a few rain clouds soaking Florida’s mostly curveless roads, we spent a full day testing the new Low Rider, along with the another new model launched – the SuperLow 1200T.The Low Rider returns to Harley’s lineup following a five-year hiatus, and redelivers a machine built for the rugged rider – the one who wants an agile chassis combined with comfort and muscle for some no-B.S. cruising. And though I could barely feel my fingers when the over 150-mile test was completed, the Low Rider delivered just that.The Dyna-based Low Rider first arrived in 1977 as an FXS built on the legendary Super Glide chassis. One look at the numbers, and the original Low Rider pleased many; it outsold all other Harley-Davidson motorcycles in its first year of production.Like all other models in Harley’s 2014 Dyna lineup, the Low Rider arrives with the Twin Cam 103 that produces a claimed 98.8 ft.-lb. of torque at 3500 rpm. The 103 ci engine, which became standard on all touring models in 2011, has always pleased us due to its optimal power output across the RPM range. And this is just what it did on the 666-lb. (wet) Low Rider.The noise emanating from the Low Rider also pleased; the chrome 2-into-1 exhaust sounds unbelievable, and we really don’t know why any rider would replace it. The exhaust – built like the original 1977’s – has a throaty tone, and sounds beautiful once you start building RPMs – especially past 2500.Downshifts from the smooth-shifting 6-Speed Cruise Drive transmission were not needed when passing at speeds nearing 80 mph, and the big torque from the Twin allows the rider to drop the RPMs low without downshifting in urban situations. Also, there were no issues with finding neutral.[Visit the Ultimate Motorcycling Reviews Page]Like the engine, the 2014 Harley Low Rider immediately impressed us with its comfort and handling. Harley says it built the Low Rider using its new “perfect fit” ergonomics design, which utilizes three features – a two-position adjustable seat, adjustable handlebar risers, and the footpegs on the mid controls that are relocated two inches forward.The Low Rider’s rider triangle was designed to cater to  those from 5’1″ to 6’1″ – an entire 12 inches of variation. The Low Rider fit my just over 5’11” body perfectly. And in a few minutes, any rider armed with an Hex wrench can change the position of the handlebars throughout a 2.4″ range; the bars can be moved forward and rearward through adjustments on the risers just above the triple clamp, and the bars themselves can be rotated forward and reward in the risers.Harley also incorporates a removable bolster that when used moves the rider 1.5″ forward. This will definitely help shorter riders get closer to the controls, but I was most comfortable without the bolster. Inserting the bolster is easy; just remove the seat and it replaces the stock chrome Harley-Davidson badge. 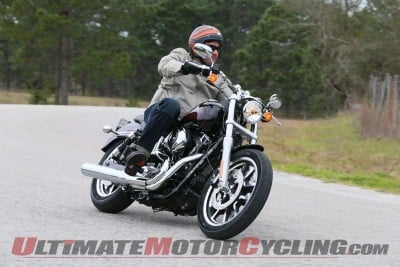 The Low Rider also adheres to its name regarding its 25.4″ seat height. And while sitting low creates a muscular image, the fat styling of the 4.7 gallon tank enhances the new black-crinkle finished console. This console holds an analog speedometer and a tachometer stacked vertically like a streetlight.Though Florida has some smooth roads, there were a few sections where bumps were many. The 49mm front forks and coil-over rear shocks – arriving tastefully black – combined with the cruiser-happy 64.2-inch wheelbases provided a smooth ride across all surface conditions.The Low Rider dons Michelin Scorcher tires, which provided more than enough grip even in wet conditions. And the tires are wrapped around some stylish five-spoke wheels finished in crinkle black with diamond-cut highlights that look shine like buffed stainless steel. Just as eye-catching as the console is the chrome battery box featuring the black-crinkled Low Rider logo.Thankfully, the Low Rider arrives with dual 300mm discs up front squeezed by four-piston calipers and a single 292mm disc out back squeezed by a two-piston caliper. The front brakes didn’t have the strongest initial bit, but provided optimal power for quick stopping or loading the front suspension ahead of a corner. Take note, also, the levers are not adjustable, and this may cause some issues for shorter-fingered riders.The rear brake had gobs of stopping power, though we had to make some adjustments because I was forced to practically take my foot off the right peg to use the brake on the first part of the ride. Once adjusted, interaction was easier.Our test bikes arrived with the optional ABS, which adds $795 to the base prices of $14,199 for Vivid Black, and $14,929 for Two-Tone Brilliant Silver/Vivid Black and Two-Tone Amber Whiskey/Vivid Black. The ABS is worth the extra cash; it provides security when braking in any condition, though riders should familiarize themselves with pedal/lever modulation under heavy braking in emergency situations.Overall the Low Rider delivers the styling of the debut 1977 model, but offers the handling and power of a modern-era machine. This combination taps directly into a rider’s soul…especially that rugged rider who wants to leave all the stress of the world behind and simply ride.This is what the 2014 Low Rider did for us during a long day in cloudy and cold conditions. Bring out the sunshine, and this bike would have appealed to many more emotions.Riding Style:Photography by Riles & Nelson