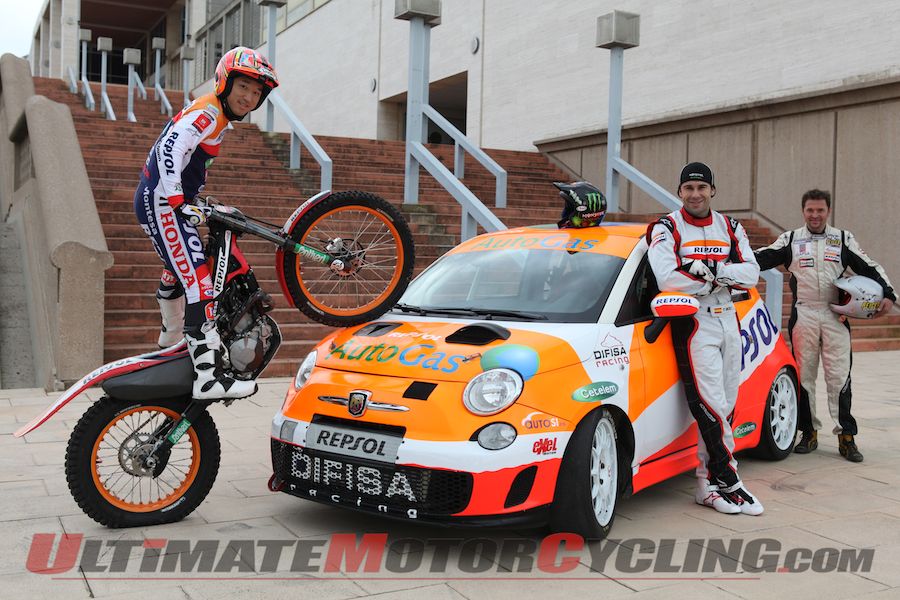 Toni Bou NewsAfter taking the Spanish Trial Championship, Repsol’s Toni Bou reported he will participate in an event that doesn’t require two wheels – the Alcaniz 500 race at Motorland Aragon in December.Bou will compete at the Endurance Spanish Championship race in a Fiat 500 205cv that “runs with alternative fuel which helps improving the quality of the air due to minimum emissions and also offers an economical advantage for the users compared to traditional fuel due to its higher efficiency.”The Fiat will be the first modified racing car in Spain to run on Repsol AutoGas. Bou unveiled the Respol Fiat 500 this weekend with his fellow co-pilots for the Alcaniz 500 – Dani Sola (junior World Rally Champion) and Jaime Hernandez (driver and journalist specialists on circuits).Repsol reports that the Fiat is a “vehicle adapted to work with Spanish technology provided by Difisa, the biggest Fiat dealer in Cataluña. Several journalists had the privilege to accompany Bou as codrivers in a short stint near Palau Sant Jordi.“Furthermore, Takahisa Fujinami, Bou’s team mate at the Repsol Montesa Honda Team, also attended the event to support the rider from Piera. The Japanese rider had a ‘duel’ with Bou, making some impressive jumps and tricks with his bike.”Toni Bou (Repsol) says: “After a fantastic season, for me it is a prize that Repsol gives me the opportunity to run the Alcañiz 500 km in a circuit such as Motorland, which is amazing. The car I will drive has special features. It works with a fuel named AutoGas, which contributes to improve the quality of the air and has a much lower consumption. This will allow us to do more laps and to be more competitive.”