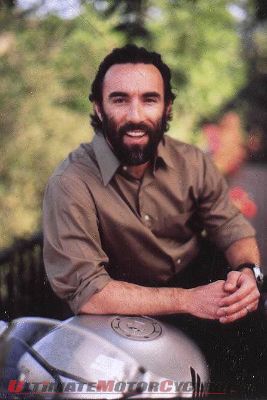 Motorcycling lost quite possibly its most passionate proselytizer last week. Actor Francesco Quinn will be dearly missed by many, including those of us who came to know him by working in the motorcycle industry.

Frankie was only 48 when he died, apparently from a heart attack, doing something as mundane as hoofing it down a Malibu street along with his young son. A complete counterpoint to the sheer brio for which he was known.

We can’t even begin to express our sorrow for the immeasurable loss to Frankie’s wife, family, close friends, and perhaps most especially for his three children.

For virtually all his life, he was a motorcycle rider and he wanted virtually everyone else to be one, too. Like his famous father, international star Anthony Quinn, Frankie made his living as an actor.

His breakout role in Oliver Stone’s “Platoon” showed that he had that special talent to be in front of the camera. But it was motorcycling that he seemed most interested in talking about, in sharing, and with anyone at that.

Frankie was a genuine rider. He was one of us. Motorcycling was in his bones. For him, it wasn’t just about being cool or having the latest fashion accessory.

He really knew how to ride. He did track schools. He appreciated bikes, not just for their style, but for their technology and engineering. He was always happy to get into motorcycle shows ahead of the public so he could see all the new bikes, sit on them, size them up. Of course, he had his own collection, plus whatever demo bike he could borrow from manufacturers. He knew how to fine-tune a machine, too, what bits to add to make it even better, faster. He loved a good, new helmet, and a custom paint job to go with it. He knew racers as friends, like world champion Max Biaggi (Frankie’s son’s name is Max), and he loved being at the races, all kinds, from road racing to Supercross.

And Frankie was the kind of well-rounded rider who enjoyed every type of two-wheeler. He had his own tricked-out sport bikes. He also rode a cruiser or a Gold Wing now and then. And while he was a rugged, tough guy, on-screen and off, he didn’t turn his nose up at scooters. He loved them, recognizing them for what they are: convenient, fun transportation.

He rode whenever and wherever possible, a true ambassador for two-wheeling. He’d ride to meetings with Hollywood producers. He’d ride to and from the movie set. He’d ride for fun. He’d ride to errands. And in doing so, he’d happily present motorcycling to everyone, from high-powered entertainment executives to the assistants handling his travel arrangements. Given half a chance, he’d bend someone’s ear for half an hour, or more, about the benefits of riding, and the joys.

Frankie’s one-on-one moto evangelism, coming through his infectious charm, was so powerful because he was a true believer. And being movie-star handsome, with penetrating eyes and a strong voice, he made for the most compelling spokesperson. He was one of those people who made an impression on you.

And when the industry called on Frankie to speak for motorcycling, before a much broader audience, on television or in print, he would never fail to be there. No prima donna, he’d be up in the wee hours of the morning, doing satellite media tours about motorcycling and safety, talking with one network affiliate after the other.

He’d be there, putting up with a flighty roving TV reporter on Ride to Work Day, all with a smile and enthusiasm. And forget the plane, he’d ride all the way, hundreds of miles, in the heat, from Southern California to Laguna Seca to help mingle with mainstream media at the MotoGP races. He’d make these events that much more exciting and special. He was there for motorcycling. He was there for us.

Sadly, tragically, Frankie’s gone now. We’re still shocked and will be for some time. He was always so physically fit. When he wasn’t on a motorcycle, he was often on a bicycle, pedaling hard. He did “centuries,” hundred-mile rides in one sitting. His passing, far too soon, just doesn’t make sense.

As motorcyclists, we can only be thankful that we had him as a fellow rider. When it comes to motorcycling, we can only speak a little louder, with more vigor and passion, if we hope to honor the memory of all he did for us. And we’re never going to forget Francesco Quinn.