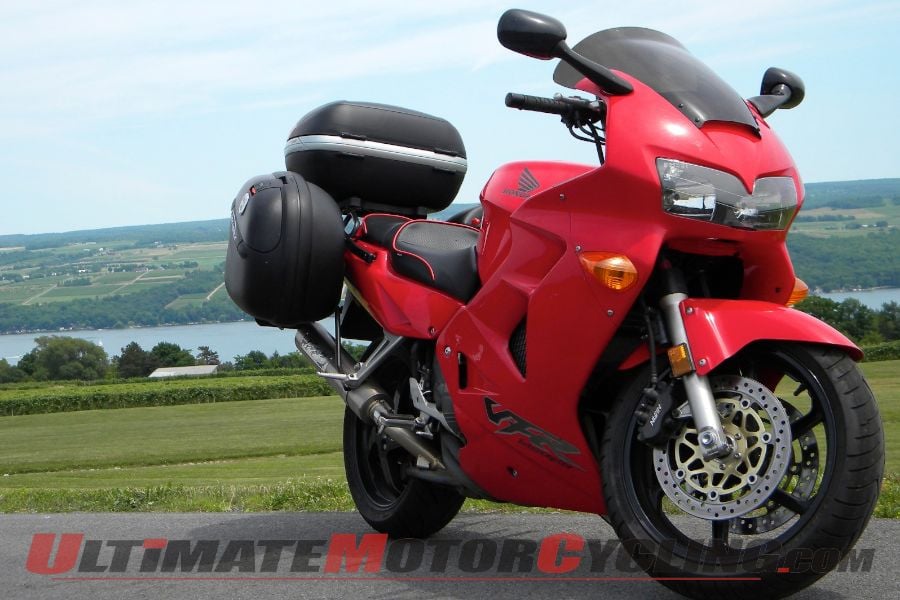 Throughout last year’s sport-touring season, a problem developed, one that plagued me whenever the sky was crying – wet cargo.That season, I put 22,000 miles on my budget builder, a 1998 Honda VFR800, with more than half of those in the rain. And during those miles, I went through three pairs of rain covers on my soft motorcycle bags, the wind ripping them to shreds.I even attempted customizing my own, but nothing worked.Besides wet cargo issues, there was also the hassle of meticulously untying, unpacking and repacking items when I arrived at my destinations.This all needed to change; and it quickly did after I added the GIVI Monokey luggage system (V46 Tech topcase, and E41 Sidecases) to my VFR earlier this year. Now I will never go back to soft luggage while sport touring.I repeat. Never.From the very first day with the GIVI hardbags, all my issues were resolved – no more wet items, no more meticulous packing, no more frustration when you see a ripped-rain cover in your mirror.And don’t forget space; I know have 128 liters to fill. That’s more than enough for even the rider who doesn’t pack light, each case holding 22 pounds of cargo.As one would image, though, with this extra off-set weight comes some handling woes; this is especially true when the topcase is loaded to the max. But with some practice, you can learn how to distribute the heavier cargo items in the sidecases, and the lighter stuff for the top case.When the two huge boxes arrived from the brown truck this past spring, I immediately got to work. I was nervously waiting for Mr. UPS man that evening, prepping to leave that night for a 700-mile weekend trip to a racing school; I wasn’t about to load softbags and then use a cargo net to strap down my one-piece leathers and boots.As luck would have it, Big Brown arrived around 5, about two hours after I wanted to leave. I figured it’d be an easy process, but when I opened the boxes, all the instructions were in my native Italian…the problem is I can’t speak my native language, never mind read it.But after some analyzing and a trial/error period, I got the GIVI metal fitment racks installed for the Monokey setup. Total time was about 1.5 hours. And I admit, when I took a step back and looked at those black panniers protruding around the slick bodylines of the VFR, I was displeased; the setup was extremely ugly.But after I easily hooked the bags into place, that feeling vanished. And I mean easily…the V46 top case and E41 side cases simply hook into two guide pins/notches, and then snap into place. 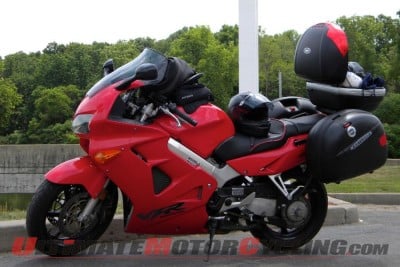 To remove, unlock and push a button, and the case was removed. It’s seriously five seconds of work.I was now set to give them a serious test-run, and was immediately satisfied with cargo room. I fit enough laundry for two days, an extra pair of sneakers, my full-piece Joe Rocket Speedmaster Suit, some Sidi Vortice boots and my Joe Rocket RKT race helmet for the track. And there was still additional space for some water/snacks, among other smaller items.Since that initally trip, I’ve taken two-up weekend trips with the woman and had enough space, and many solo weeklong trips with leftover room for an extra jacket or boots.The hard bags, which I’d trust in case of an accident to protect my cargo due to the hardness of the plastic, also feature an X-type strap, allowing you to hold items in place while closing the cases; this is especially needed for the E41 cases which open/close like briefcases.As for being waterproof, they work extremely well. On a recent trip up north to New York’s wine country, I got stuck in about 700 miles of rain between two days. All my cargo remained dry. Remember, though, when you remove the E41 sidecases, water collects where the handle is located. Make sure this area is dry; if not, when you open the case you’ll get some water on your cargo.Besides the 128 liters of cargo space (46 in top case, 41 in each side case), the waterproof factor and (very) easy attaching/removing efforts, the E41 side cases feature a separate panel that allows you to access the cargo through a three-digit combination lock. This is great for removing smaller items, such as gloves, a hat, wallet, or whatever else is needed without actually opening the bags.The Monokey feature is ingenious also. Simply put, one key works for all three cases. If you only go with the side cases, the supplied key will open both. But if you want to add the top case and use one key, you’ll have to order a matched key/lock set to match the side cases.An optional item I went with was the backrest (E95S) for the GIVI V46 topcase. It’s a shame you have to drill into the plastic to install it, but everything remained waterproof. I also used some Teflin tape around the bolt itself to ensure extra waterproofing.And oh, did I mention the space? Now I can always use the bike for those trips to a dinner and a movie with the girl, who doesn’t trust her gear attached to a helmet holder, or her jacket on the ground attached to a rope-type lock around the rim.Now we simply go, and the V46 top case swallows both full-face helmets, even with the Cardo Scala Riders attached. And she has her side case, and I have mine. No excuses now…just more riding time.The UltimateMotorCycling.com GIVI Monokey verdict: If you want massive storage while motorcycling anywhere, easy removal/attachment and dry cargo, check out the GIVI Monokey system.GIVI Monokey MSRPFor additional information, log onto the GIVI website.About the VFR Budget BuildI purchased the 1998 Honda VFR for $2300, which was by far the best deal I’ve ever received on a motorcycle. The bike had 14K on it, and the seller had it listed for $3800 on Craigslist as a “beginner’s sportbike,” obviously not knowing what kind of sport-touring machine he had.When I first laid eyes on it in his warm basement, I couldn’t believe the shape it was in. I knew this was the perfect platform for my budget sport-tourer build, one that I can mod to match the performance/comfort of a newer sport touring bike that costs quadruple the original asking price of my Viffer.Plus, it was a fifth generation model, which still had the mechanical cam gear that gave the V4 that muscular sound. And of course, I had to get it a bit cheaper, finally snagging it for an unbelievable $2,300.VFR Budget Builder Tally: Total Investment: $4139