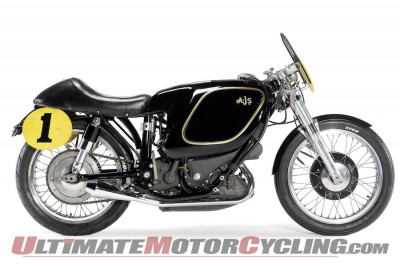 Vintage MotorcycleThis August, a 1954 AJS E95 Porcupine vintage motorcycle will be on the block at Bonhams. This British machine has quite a history, and is a favorite to many collectors of vintage motorcycle race bikes.Following is a history of the 1954 AJS E95 Porcupine motorcycle from Bonhams:While statistics show that the Norton is Britain’s most successful post-War Grand Prix racing motorcycle, the country’s first success in the modern era’s World Championships was achieved by another marque with an equally illustrious racing history: AJS.And the machine that carried Les Graham to his, and AJS’, first and only World Championship was, of course, the legendary Porcupine. And unlike the Nortons, the Porcupine is a totally unique design, owing nothing to the production models.Conceived during the years of World War II, the Porcupine was originally designed with forced induction in mind. Supercharged multi-cylinder engines had begun to threaten the single’s supremacy towards the end of the 1930s and, indeed, AJS themselves went down this road with their fearsome water-cooled V4.Fast yet difficult to handle, the latter had demonstrated that horsepower bought at the expense of excess bulk and weight was not the answer, so the designers’ thoughts turned to a twin. Laying the cylinders horizontally with their heads facing forwards would ensure adequate cooling and a low center of gravity, while at the same time providing room for the blower above the unit construction gearbox.When FIM (the governing and sanctioning board of international racing) banned supercharging at the end of 1946, the design was too far advanced to be substantially altered, though the cylinder heads were revised to raise the compression ratio.Typed E90, but dubbed “Porcupine” by the motorcycling press because of its distinctive spiked cylinder head finning, AJS’ new challenger debuted at the 1947 Isle of Man TT piloted by Les Graham and Jock West, the pair finishing 9th and 14th respectively after a variety of problems. (By way of consolation, West’s best lap was only three seconds down on the fastest and proved that the bike had promise).Two years later, in 1949, the ultimate victory was achieved as Graham won 1st place in the inaugural Grand Prix World Championships astride the Porcupine, a win that was to become AJS’ and Graham’s only major title.Many years later, AJS works rider Ted Frend – the first rider to win a race on the bike – recalled that carburetion had been the bike’s biggest problem, perhaps not surprising given that it had been designed for a supercharger, and over the years a bewildering number of different induction arrangements were tried.The bike was also bedeviled by magneto shaft failure – the cause of Graham’s retirement from the lead of the ’49 Senior TT just when two minutes from the finish – a problem that would not be solved until chain drive for the magneto was adopted on the revised E95 engine.Introduced in 1952, the E95 engine had its cylinders tilted upwards at 45 degrees, an arrangement that called for a new frame, and featured a long underslung oil sump, and pressed-up crankshaft with one-piece connecting rods and roller big-ends in place of the E90’s one-piece shaft and shell-type bearings.Another new addition to the AJS team for ’52 was New Zealand star Rod Coleman. Coleman had first been given an E90 to try at the ’51 Ulster GP, and followed that up with a strong showing at the Grand Prix Des Nations at Monza.“In the race it was quite definitely faster than the Nortons and I had little problem getting past Geoff (Duke) and Ken (Kavanagh) with just three Gileras only a short distance ahead,” Rod recalls in his book, The Colemans. “I did get with them and found again that the Porcupine was just as fast as the Gileras but was down a little on acceleration from the slower corners, but not by much.I was just beginning to think I had every chance of second place behind Milani when the motor stopped.” The cause was yet another magneto shaft failure.For 1954 Jack Williams took over the race team and the result of his brilliant development work was a much smoother, more reliable engine and a better handling bike. The E95 Porcupine and works ‘triple-knocker’ 7R3 gained new pannier-style fuel tanks, which extended down on either side of the engine thus lowering the centre of gravity and affording a measure of streamlining at the same time. A new second version frame lowered the bike still more. An AC fuel pump raised petrol to the carburetors, and a clever delivery system involved mechanics standing the bike on its rear wheel to prime the header tank for starting!Bob McIntyre, Derek Farrant and Rod Coleman were the riders, the last providing the Porcupine with its best international results of the season, placing second in Ulster and winning the Swedish Grand Prix.Sadly, just when the E95 was at last proving its full potential, 1954 would prove to be the Porcupine’s swansong year as AJS withdrew from direct involvement in Grand Prix racing at season’s end. In total, just four complete E95 machines were built, plus one or two spare engines. With the exception of the Tom Arter machine, they were raced only by the works team and never offered for public sale.The last Porcupine to sell at auction was under the hammer of Bonhams’ current CEO, Malcolm Barber. It was the non-works, privateer-raced Tom Arter E95 Porcupine and it sold, 11 years ago in 2000, for £157,700 (approx. US$258,500) – a then British motorcycle world record. With the significant increase in demand for historical and rare machines at the top of the market, the estimate of $750,000 for this particular Porcupine offered in August’s sale is, in most experts’ opinion, quite reasonable.