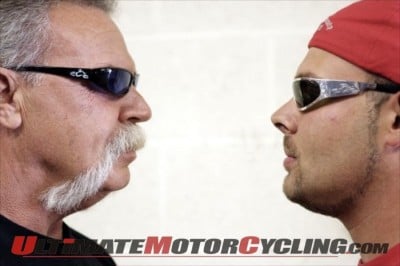 Senior Vs. Junior Episode 3, Season 2 The third episode of American Chopper: Senior Vs. Junior opens with Paul Teutul Sr. going to see his son Mikey’s art gallery. The drama immediately begins with a few art pieces at the gallery that seem to open up another side in Senior.One painting is a face with a tear running down his cheek and it says Remember when Daddy loved us. The other one was a sad face that read “Sad Dad.”Paul Sr. says that the paintings are displaying Mikey’s hopes to have the family back together. It made Sr. think of family and relationships and possibly reconciliation in the future. This brings some significance to the quote at the intro of the show: “Passion and Pride brought them together and then pushed them apart.”American Chopper: Junior Vs. Senior then segues into the bike builds, which continue to get more intense. Paul Jr. Designs is building two bikes for Crankyape, which auctions off motorcycles, ATVs, and snowmobiles that have been repossessed by the bank.One will be a custom chopper that will be kept at the Crankyape office, and the second will be a stock bike that is won via auction on their site. This stock motorcycle will then be stripped down, rebuilt and auctioned off again; the proceeds from the auction will be donated to a charity of their choice.Additional drama unfolds during a meeting with one of the Crankyape owners and the staff at Paul Jr. Desings. During the meeting, Brian Livingston, part owner of Crankyape, explains that five years earlier they reached out to Orange County Choppers but were not given the time of day.However, once Paul Jr. branched out on his own, the owners of Crankyape figured they would give it another chance. CrankyApe was pleasantly surprised when Joe of PJD got back to them within two days.On the Orange County Choppers side of the show, Paul Senior and his crew are working with TransAm Depot, which specializes in fabrication and customization of the 2011 Pontiac Trans Am.OCC will build three bikes to resemble the three custom cars TransAm Depot is building. First is the Hurst edition Trans am. Next will be the GTO, and then a 1969 version of a newer Trans Am.Later in American Chopper: Senior Vs. Junior, Mikey stops at PJD to tell Paul Jr. that their father stopped by the art gallery. Paul Jr. thinks that it was a good idea his Dad checked it out but questions the motive. Mikey hopes that Sr. keeps moving in the right direction, and Paul Jr. is happy that his father is reaching out on some level to what Mikey is doing.In this episode, the drama expands as Vinny and Paul Jr. discussed their personal feelings towards Paul Teutul Senior. Vinny mentions that Senior gets to him because of the stupid things he does. Paul Jr. said that it doesn’t bother him because he knows how he is and what he is trying to do. He says he just doesn’t understand why his Dad just doesn’t give up on talking smack.Finally, the much-anticipated information about the second lawsuit is given. First, some details on the first lawsuit: when Paul Jr. was fired from Orange County Choppers, Paul Sr. attempted to sue his son, wanting Junior’s 20-percent of the company.Paul Sr. then said that Paul Jr.’s 20-percent weren’t worth anything. Nevertheless, Paul Jr. appealed the decision and won. The appellate court said that his father has no option to buy Junior’s 20 percent. Senior and Junior need to decide with or without lawyers what the shares are worth.Paul Jr. hopes that after two years in legal chaos, father and son can come to some solution which will open the door for reconciliation.After Junior meets with his attorney, the show transitions to Senior meeting with his attorney. The way Senior’s attorney describes the case is that no one has won or lost. The case is at a standstill until the parties can come to a resolution without the courts help.Sr.’s attorney explains that all of the litigation could have been avoided if Pauly would have allowed an appraisal of his shares. Senior stresses that he didn’t ask for the lawsuit and he didn’t want the lawsuit. He too is hoping that they can come to a settlement outside of court and stop it before it gets any worse.The show ends with Paul Sr. having another meeting with his attorney. He stresses that two years is long enough to be apart from your boys. Senior doesn’t think that getting the lawsuit wrapped up will cause immediate reconciliation. They are going to reach out to Pauly’s lawyers to come to some sort of conclusion. The final goal is to get the entire family together.The show continues next week, when Paul Jr. Designs continues work on the Crankyape chopper, and OCC on the Trans Am bikes.And the drama is expected to intensify, as Junior reaches out to his father…it appears an interesting twist in the Teutul saga is about to unfold.