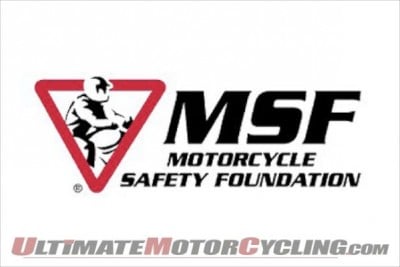 Motorcycle Safety FoundationThe Motorcycle Safety Foundation is strongly urging all motorists to stop driving while distracted and fully backs April’s national awareness month to combat this deadly highway hazard.Tim Buche (MSF President) says: “Distracted driving is of great concern for motorcyclists as we simply have more at stake. Riders are obviously more vulnerable than car or truck drivers, the ones with far more access to a variety of distractions. Most motorcyclists are focused on one thing: riding. Other motorists should be focused on driving.”The U. S. Department of Transportation’s website, distraction.gov, reports a variety of sobering statistics:Tim Buche says: “With these alarming, increasing reports of driver distraction and resulting injuries and deaths, we support every effective effort, including legislation, to fight this growing hazard. We’re very pleased that Oprah Winfrey, an influential TV personality with huge national reach, has come out so strongly against distracted driving.”Introduced by former U.S. Representative Betsy Markey, the resolution to create a National Distracted Driving Awareness Month was passed by the U.S. House of Representatives on March 23, 2010.Most states currently have laws regulating distracted driving. The DOT reports that 30 states, the District of Columbia, and Guam ban text messaging for all drivers. Last year alone, 12 of these laws were enacted.To increase driver awareness, the MSF presents key facts about motorcycles and their riders and has created a website with valuable resources for drivers called forcardrivers.com.10 Things All Car and Truck Drivers Should Know About Motorcycles and Motorcyclists1. There are many more cars and trucks than motorcycles on the road and some drivers don’t “recognize” motorcyclists. They ignore them, usually unintentionally. Look for motorcycles, especially when checking traffic at an intersection.
2. A motorcyclist may look farther away than he or she is in actuality. It may also be difficult to judge a motorcycle’s speed. When checking traffic to turn at an intersection or into (or out of) a driveway, estimate that a motorcycle is closer than it looks.
3. A motorcycle can be easily hidden in a car’s blind spots or masked by objects or backgrounds outside the car. Thoroughly check traffic, whether you’re changing lanes or turning at intersections.
4. A motorcycle may seem to be moving faster than it really is. Again, don’t immediately rely on your perceptions.
5. Motorcyclists sometimes slow down by downshifting or merely rolling off the throttle, thus not activating the brake light. Don’t tailgate motorcyclists. At intersections, anticipate that motorcyclists may slow down without any visual warning.
6. Turn signals on a motorcycle are not often automatically self-canceling. Some riders, (especially beginners) sometimes forget to turn them off. Try to determine whether a motorcycle’s turn signal is for real. And if you’re driving a car, remember to use your turn signals too. They’re a great communication tool for riders and drivers when used properly.
7. Motorcyclists often adjust position within a lane to be seen more easily, to avoid road debris, and deal with passing vehicles and wind. Understand that motorcyclists often adjust lane position for a purpose, and it’s not an invitation for a car to share the lane with them.
8. Maneuverability can be one advantage for a motorcycle, but don’t expect that motorcyclist can always steer or swerve out of harm’s way. Please leave motorcyclists room on the road, wherever they are around you.
9. Stopping distance for motorcycles can be nearly the same or better than that of cars. But wet or slippery pavement can put motorcyclists at a disadvantage. Don’t violate a motorcyclist’s right of way, especially in bad conditions.
10. Don’t think of it as a motorcycle, a machine: Think of the rider; the person on board is someone’s son, daughter, spouse or parent. Unlike other motorists, protected by doors, roofs and airbags, motorcyclists have only their safety gear and are at greater risk from distracted drivers.Tim Buche says: “While the solution to ending distracted driving is clear – better, smarter, safer decisions – upcoming research will shed more light on the nature of the problem.”In the National Highway Traffic Safety Administration’s 100-Car Naturalistic Driving Study, distracted driving contributed to more than 22 percent of all the crashes and near-crashes that were recorded. This research gathered its data from video recorders and instrumentation installed on the vehicles before they were placed back, for months, into everyday traffic.The MSF 100 Motorcyclists Naturalistic Study will soon do the same with motorcycles, for six to 18 months, and will combine unobtrusive, continuous data collection with post-incident interviews. The study will create a comprehensive picture of many factors, possibly including distracted driving, that contribute to both crashes and near-crashes.The MSF, its members, and the Virginia Tech Transportation Institute (VTTI) are now engaged in this study, likely the world’s first large-scale, naturalistic research on motorcycle riding.The Motorcycle Safety Foundation® promotes safety through rider training and education, operator licensing tests and public information programs. The MSF works with the federal government, state agencies, the military and others to offer training for all skill levels so riders can enjoy a lifetime of safe, responsible motorcycling. Standards established by the MSF® have been recognized worldwide since 1973.The MSF is a not-for-profit organization sponsored by BMW, BRP, Ducati, Harley-Davidson, Honda, Kawasaki, KTM, Piaggio, Suzuki, Triumph, Victory and Yamaha. For safety information or to enroll in the RiderCourseSM nearest you, visit msf-usa.org or call (800) 446-9227.