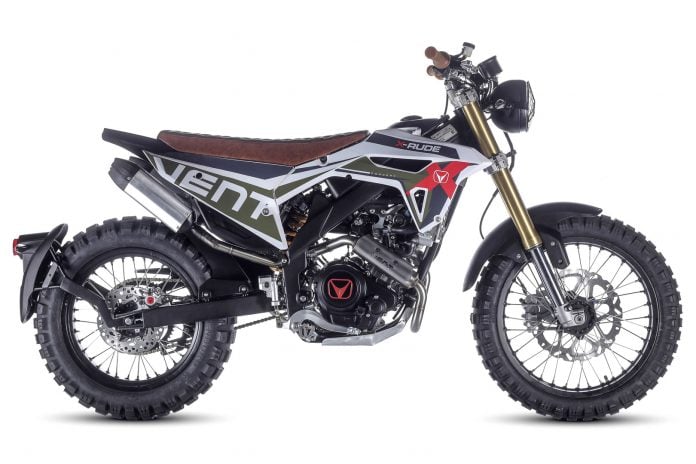 The onslaught of new motorcycles debuting at EICMA is beginning, and one of the early arrivals is the new 2023 Vent X-Rude. This blend of the Vent Supermotard and Enduro models originates from the Vent Design Laboratory in Valsassina, near Italy’s famed Lake Como.The X-Rude is powered by a 125cc four-stroke Minarelli motor, which usually means it is aimed at teenagers getting started on motorcycles for the first time. However, Vent has given the X-Rude a larger frame than is typical of 125s, making it more appealing to adult riders. 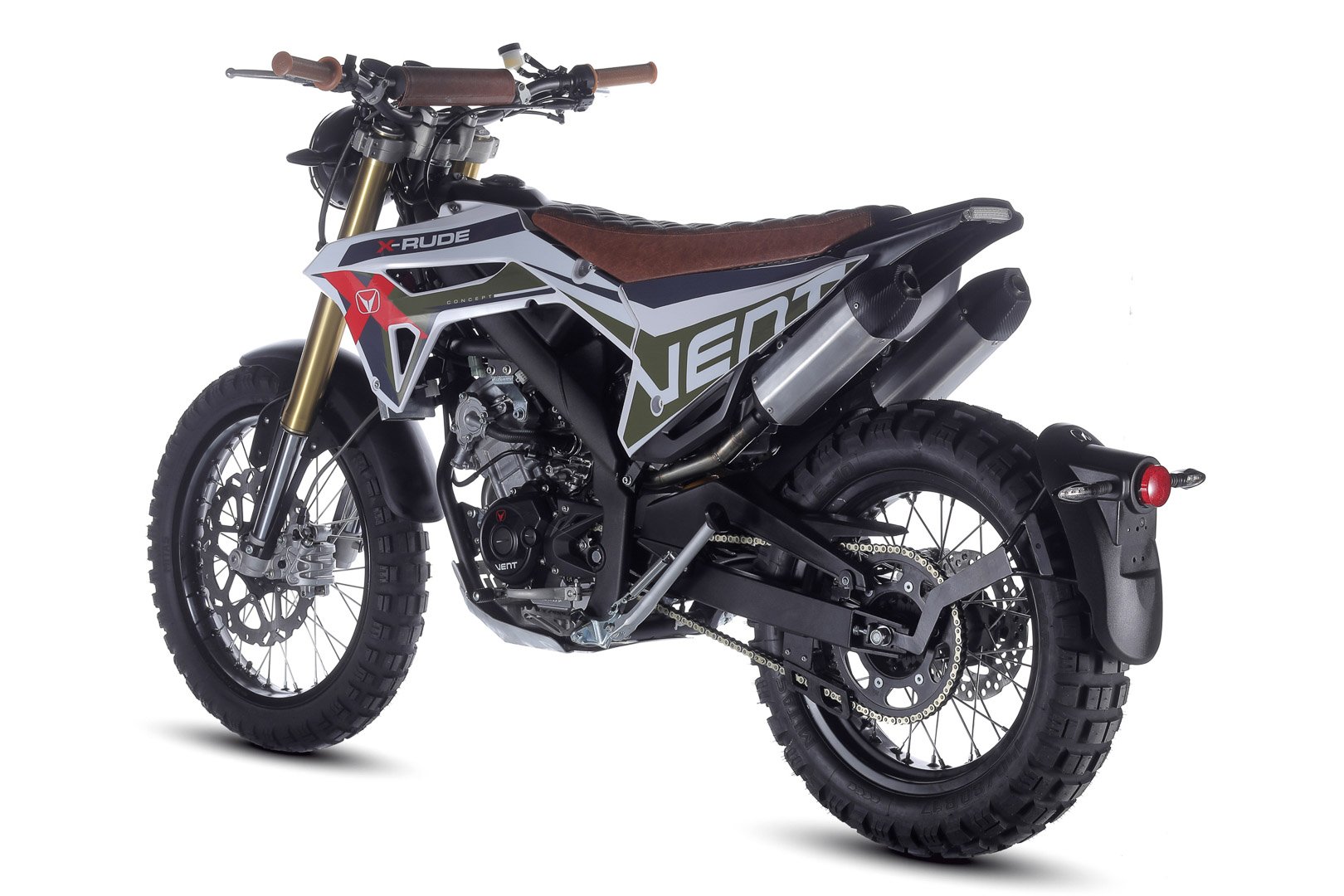 The motor is more sophisticated than we expect from 125s. In addition to being fuel-injected, the engine has variable valve timing to make it Euro5 compliant. The Minarelli motor gets a new cylinder head this year that produces more power while reducing fuel consumption and lowering the output of emissions. According to Vent, the X-Rude gets 118 mpg. The clutch has a slipper function, so aggressive downshifts are welcome.In addition to the roomy chassis, the 2023 Vent X-Rude has RSV16 suspension, including a 41mm inverted fork. That’s a 290mm front disc and a 220mm disc in the rear, and they are linked. 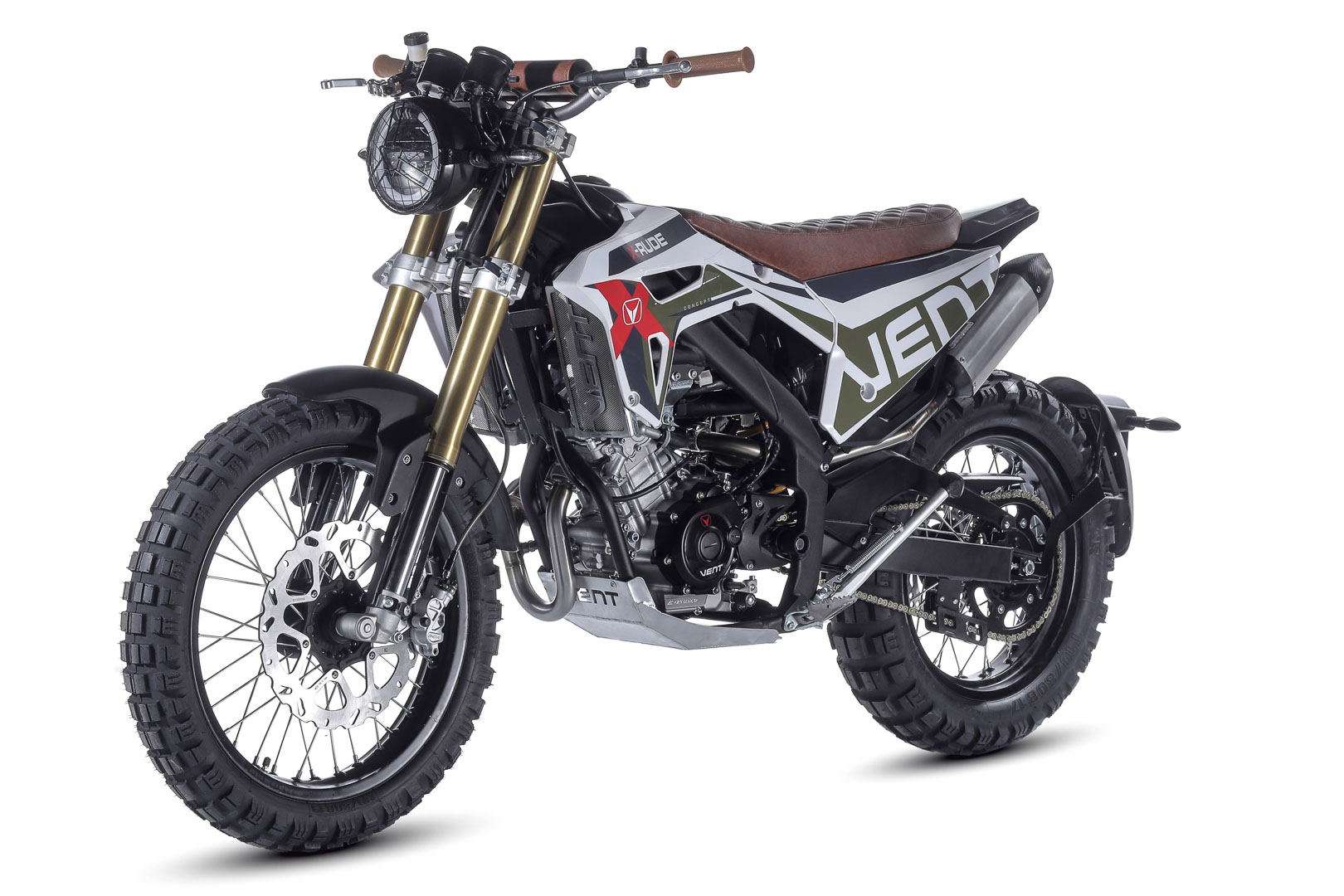 Styling on the Vent X-Rude draws from various sources. Many aspects are contemporary—the plastic, suspension, discs, and swingarm-mounted rear fender. However, the round headlight and dual round clocks provide a retro look, along with the brown quilted suede seat and grips. The fat Mitas Enduro knobby tires bring to mind many current custom motorcycles that appear prepared for a zombie apocalypse. With the dual-exhaust up-pipes featuring carbon-fiber tipped mufflers, crossbar pad, extensive skidplate, and suspension setting aimed to please both on- and off-road, we’ll call it a modern scrambler. A Vent insider tells us the company thinks the X-Rude “winks at multiple segments, from café racers to scramblers.”There’s no mention of bringing the 2023 Vent X-Rude into the United States, even as it joins nine existing Vent modes. The X-Rude is due to be available in Europe in Spring 2023 with a target list price of €5000.