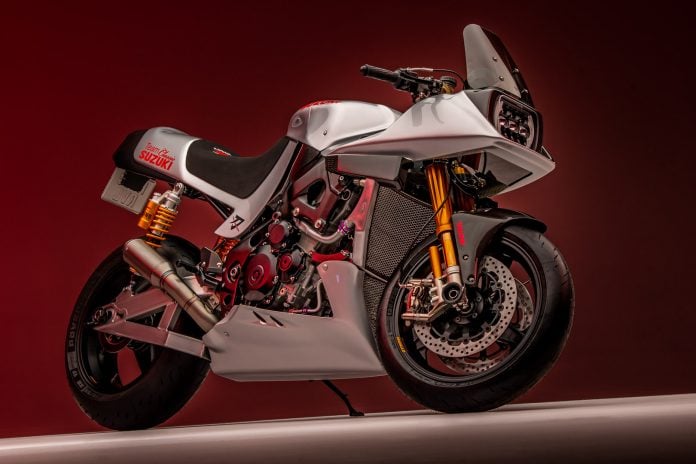 Team Classic Suzuki, a promotional vehicle for Suzuki’s Vintage Parts program in England, participates in championship endurance racing. In 2018, the team won the superbike class in the Oschersleben 4-Hour Endurance Race with John Reynolds and Pete Boast riding on a Katana. The team was due to make its Isle of Man TT debut in 2020 on a contemporary GSX-R1000—we all know how that has gone.When you can’t race, you wrench. In the case of Team Classic Suzuki, you build. The result is this stunning Team Classic Suzuki Katana, which is a fascinating street-legal retro-mod exercise based on a 2008 Alstare Suzuki raced in World Superbike. 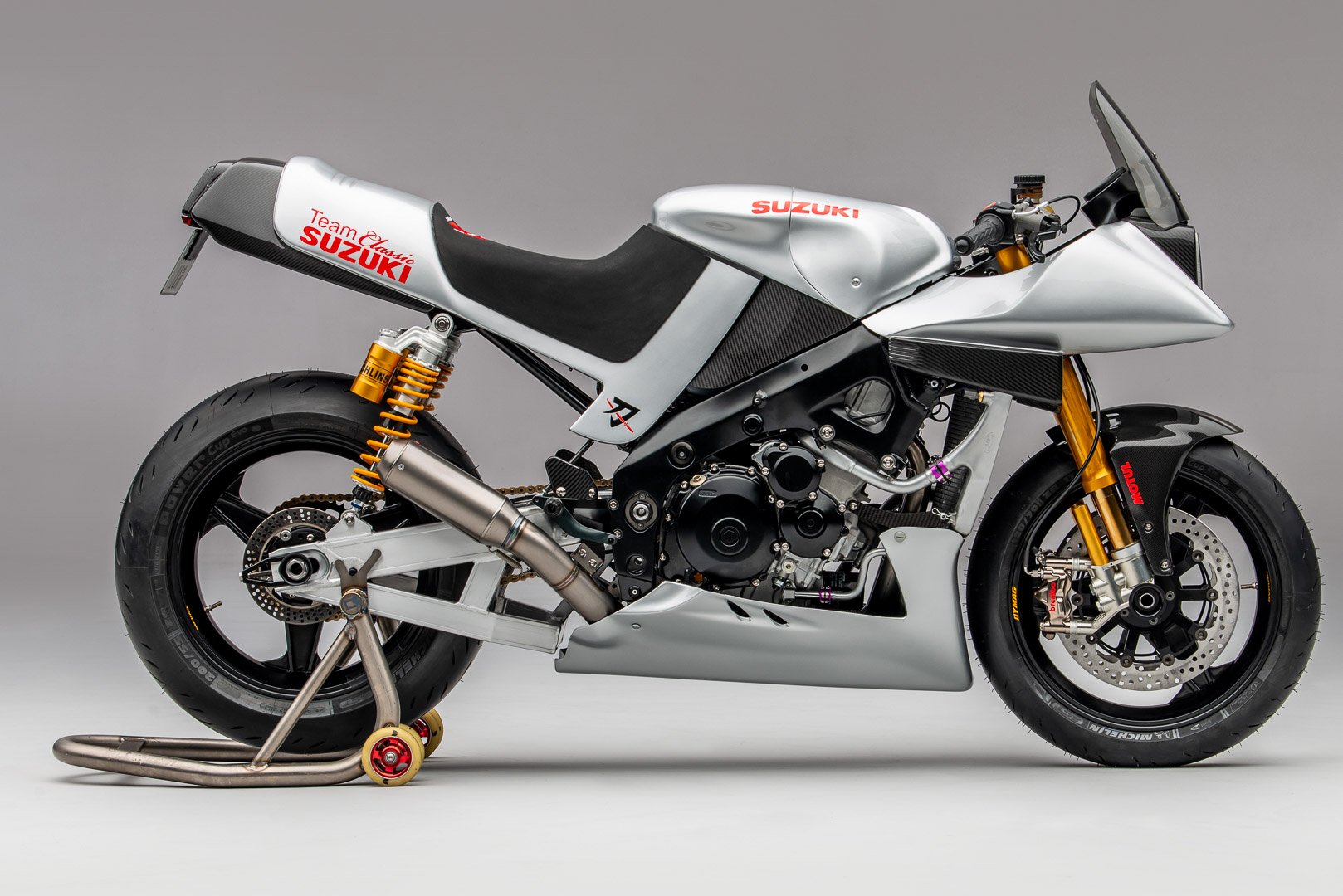 Powering the Katana is a 2008 GSX-R1000 motor that puts out 200 rear-wheel horsepower. The exhaust is initially routed out of Alstare World Superbike headers. Racefit in Darley Dale, Derbyshire—about an hour north of Donington Park Circuit—takes over for the spent gases’ trip through the muffler. Cooling is handled by a factory radiator and oil cooler, with the liquids guided through aluminum pipes. A Yoshimura EM Pro ECU and software was brought in to handle fueling and other engine management duties. For the build, Team Classic Suzuki’s Nathan Colombi did a full refresh of the classic powerplant.The retro aspect arrives via modifications to the Alstare World Superbike frame. Instead of the linkage-assisted single-shock rear suspension, the Team Classic Suzuki Katana has a one-off subframe and triangulated swingarm created by Alpha Performance Fabrication in Wellingborough, Northhamptonshire, about 60 miles northwest of London. The new rear end allows the fitting of twin Öhlins piggyback shocks, in tribute to the original 1981 Suzuki Katana. 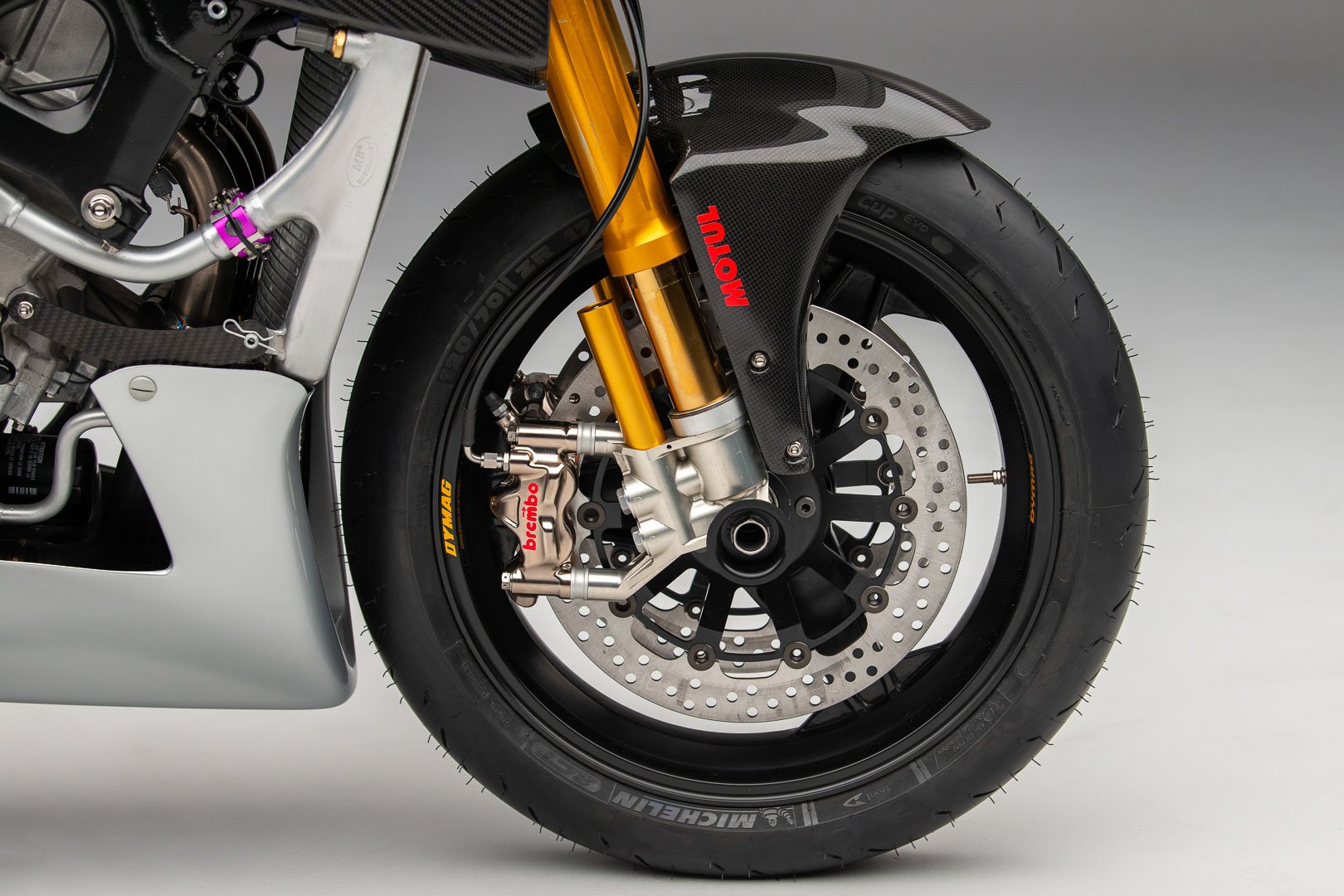 Team Classic Suzuki’s XR69 replica racers use British-built Dymag CH3 wheels. Those same cast-magnesium wheels are deployed on this Katana build, with Brembo discs, calipers, and pads take care of all deceleration. Team Classic Suzuki slipped the rear brake caliper behind the swingarm for a clean look, and the result is immaculate. Rubber is courtesy of street-legal, track-oriented Michelin Power Cup Evo tires.The tank is from the Alstare Suzuki, while the seat unit is a modified Team Classic Suzuki piece. The seat originated in Parabiago, Italy—just a few miles northwest of Milan—by Race Seats. The stylish perch features an embroidered Katana logo. To round out the ergonomics, Team Classic Suzuki added its own rearsets. 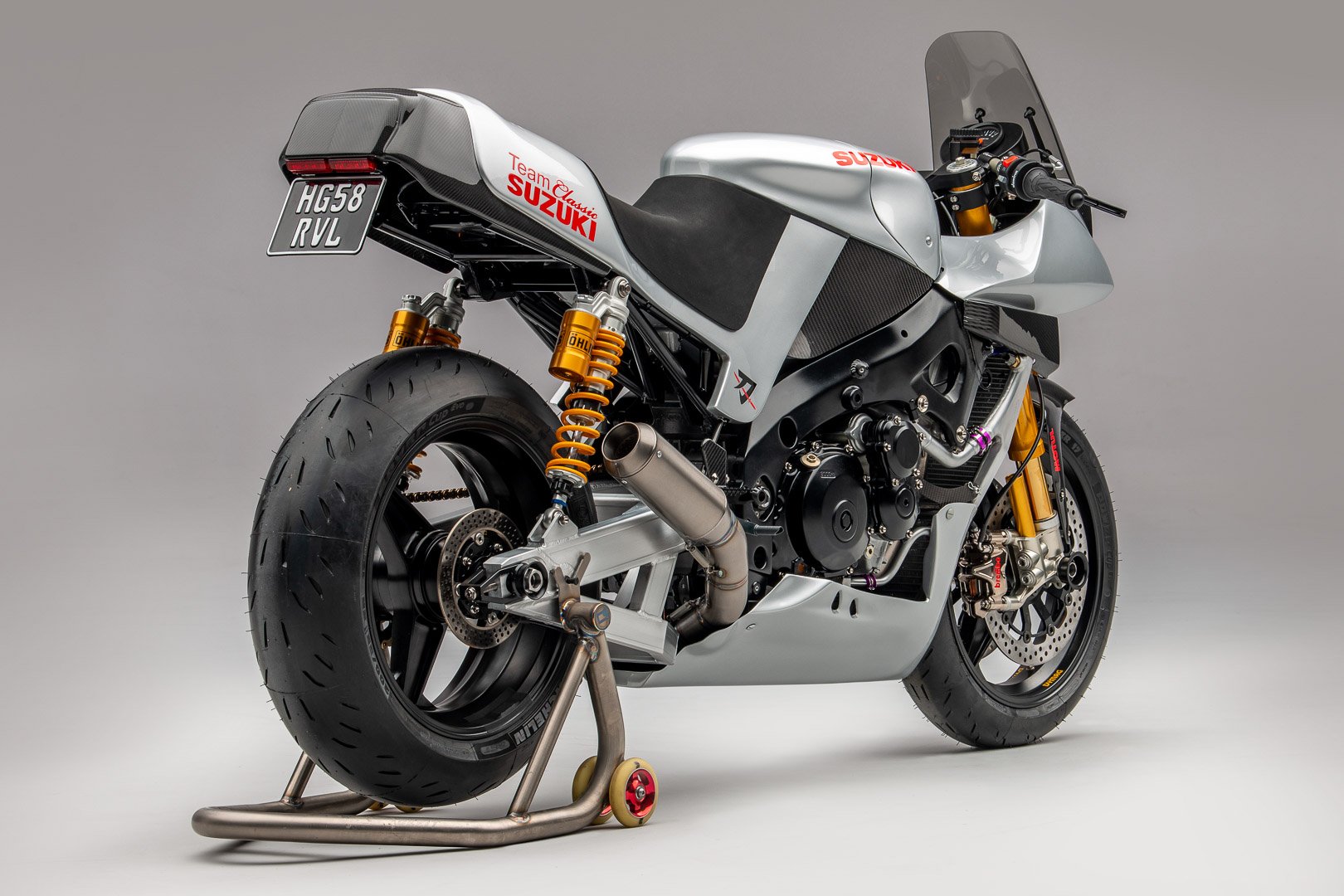 Up front, the nose piece is Katana NOS, which can be had from Suzuki’s Vintage Parts, modified to fit the more-modern front end. The seat unit has the Team Classic Suzuki logo painted on the back, plus the Katana logo painted on the lower front. The taillight and headlight are LED.Final details include carbon fiber panels accenting the seat and nose units, plus fittings and fasteners from Indiana-based RaceFastener.If you happen to see the retro-mod Team Classic Suzuki Katana in your rearview mirrors, remember that the twin-shocked resto-mod is a 2008 World Superbike racebike beneath its fabulous skin.