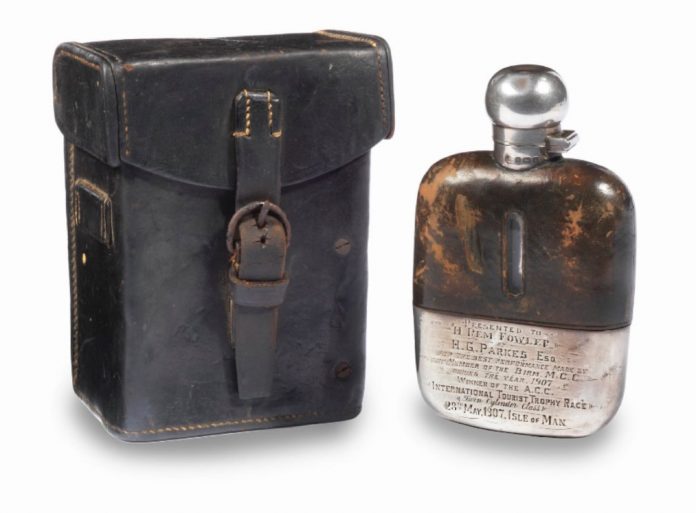 Would you pay up to $39,000 for a hip flask?Some would argue that’s crazy, but for collectors of Isle of Man TT memorabilia, it’s a much different story.Especially when you consider what flask is heading to the block during the Bonhams Autumn Stafford Sale, which will be held October 13 and 14 at the UK’s Staffordshire Country Showground.This flask was the award given to Harry Rembrandt “Rem” Fowler after he won the Twin Cylinder TT class of inaugural Isle of Man TT back in 1907. 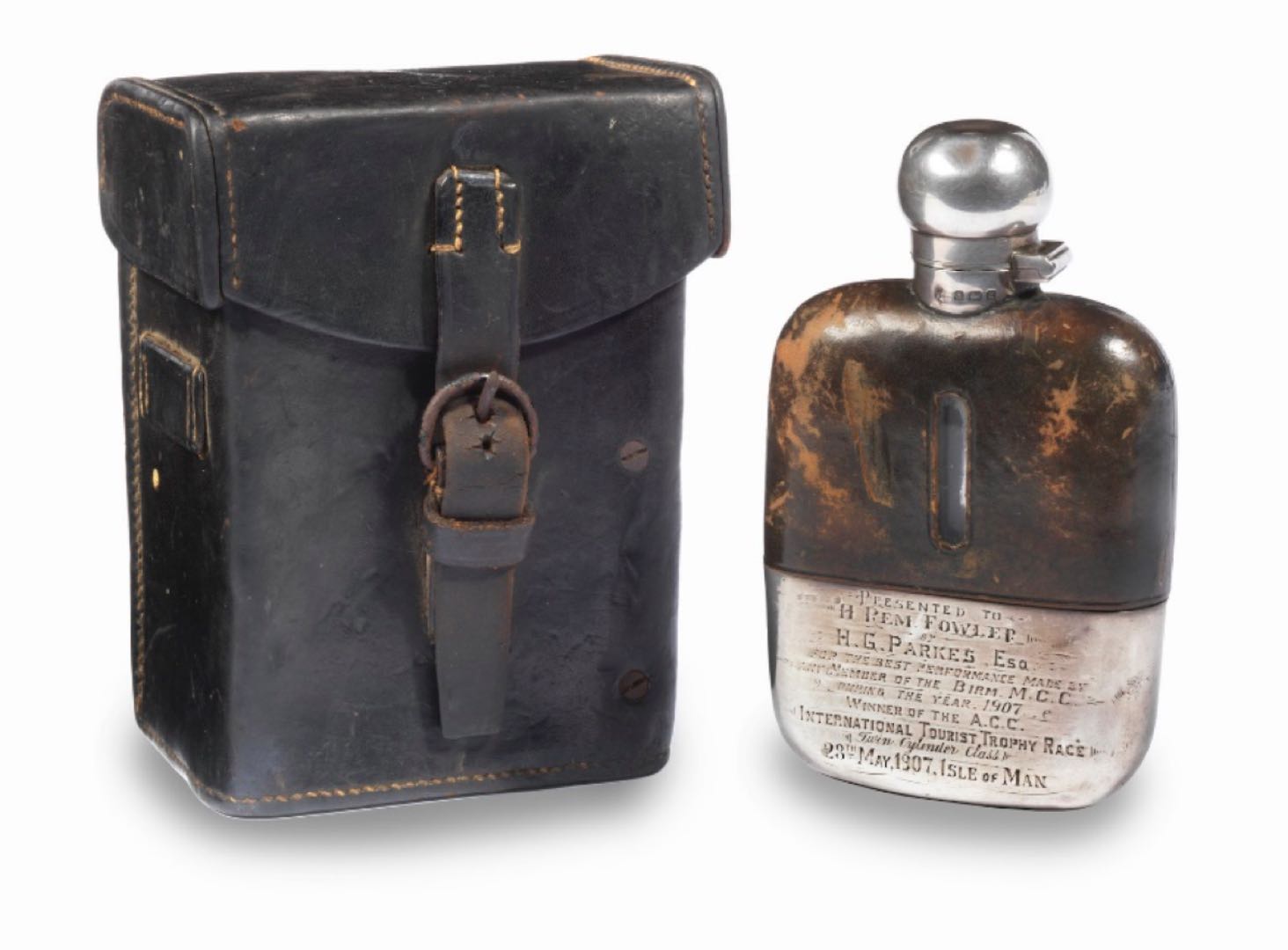 The silver hip flask was engraved with a personal message to Fowler by H. G. Parkes Esq., who helped present the TT race.Fowler, who rode a 5-horsepower Norton during the race, received the flask on his way back to Birmingham following the inaugural Isle of Man TT.Bonhams says the flask was a fitting prize for Fowler, who gained Dutch courage from a brandy tonic to soothe his pre-race nerves. Winning the inaugural Senior TT Trophy – 42.5-inches tall – was Charlie Collier, who raced a Matchless that was manufactured by his father’s company, H.Collier & Sons.Bonhams estimates the flask will be auctioned for $25,000 – $39,000“This hip flask is arguably one of the single most important pieces of motorcycle memorabilia extant,” says Ben Walker, Global Head of Motorcycles at Bonhams.“It marks the beginning of a competition that has grown from 25 competitors speeding round an island to one of the largest and most celebrated motorcycle races in the world. This is a once-in-a-lifetime opportunity for an enthusiast to own one of the most important pieces of TT history in existence.”Following is some official history about Fowler’s Twin Cylinder TT run at the 1907 Isle of Man TT (courtesy of Bonhams):On Tuesday, May 28, 1907, 25 racers set out to complete 10 laps on the St. John’s Short Course on the Isle of Man, marking the beginning of a competition now referred to in the industry as “the suicide mission.”The track’s already treacherous conditions were worsened by the TT organizer’s decision to “smooth” the road surface with an acid solution which burnt through the riders’ clothes and made the 158 ⅛ mile race even more perilous.Despite Fowler experiencing several faults with his bike, he only narrowly missed the overall first-place position. During the race, Fowler’s drive-belts and spark-plugs failed, and on lap seven his tyre burst causing him to crash at 60 mph on the sticky “Devil’s Elbow.”After the crash, Fowler was on the verge of retiring from the race, until a spectator informed him that he was still winning the two-cylinder class by half an hour’s lead.Regardless of the adverse track conditions and numerous near fatal lapses, Fowler retained the first-place pole for a two-cylinder bike and achieved the fastest average lap speed of 42.91mph on his Birmingham-made Norton 5-horsepower motorcycle.For more on the auction, visit Bonhams.