With safety in the forefront, BMW Motorrad has pioneered technology that can save lives – the “Intelligent Emergency Call” system, or simply called eCall.BMW Motorrad, which borrowed the eCall technology from its car division, says during a 2011 European trial of eCall, emergency services were able to respond 40- to 50-percent quicker. BMW reports that the trial organizer, the European Commission, estimated that using an eCall system would save up to 2,500 lives every year, which would also save €26 billion as a byproduct.Regarding automobiles, the eCall tech is so well received that it’ll become mandatory for all new cars beginning in 2018. As for motorcycles, it will be available on all BMW bieks as an option beginning in 2017.Following is the official BMW Motorrad information on Intelligent Emergency Call System:

Satellite-supported localization of the emergency site

In the case of an emergency or an accident, the intelligent eCall system, which is either automatically or manually triggered, sends out the position data, i.e. the coordinates of the motorcycle accident site, to the qualified BMW Call Center to initiate the rescue chain. The current position as well as information for determining the direction of travel are transmitted to simplify locating the motorcyclist in hard-to-find locations such as motorway junctions.eCall requires a connection to the mobile phone network in order to trigger the rescue chain. In the “intelligent emergency call” option, the connection is established via the permanently installed mobile communication unit. For the connection no specific mobile operator is required. All that is necessary is at least one operational mobile provider. The service will be made available in all European countries. 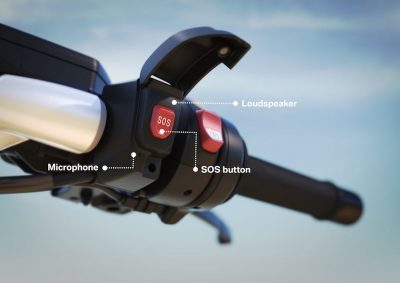 The emergency call is not triggered automatically in non-emergency situations (e.g. if the bike falls over in a stationary position or in accidents at low speeds with no other traffic user involved, a shock to the bike when riding over a pothole or while off-road riding (e.g. small jumps or riding over obstructions).

The “intelligent emergency call” option is located on the right side of the handlebar and is both ergonomic and compact. In addition to the cover-protected SOS button used for triggering or cancelling an emergency call, a microphone and loudspeaker have also been integrated. 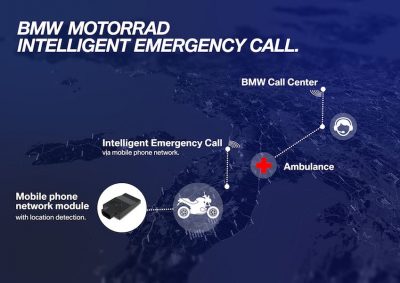 The intelligent emergency call system, available in a BMW motorcycle for the first time, constitutes a premium service with international coverage. When a voice connection is made, the rider can communicate with the BMW Call Center in his native language.This is a stand-alone feature which is highly effective in an emergency situation. The optional “intelligent emergency call” will be rolled out in Germany first and then also introduced quickly to further European markets and models.