Ultimate MotorCycling Editor at Large Nic de Sena just spent the last day racing around the hilly streets of San Francisco aboard the new 2017 Kawasaki Z125 Pro – the new rival of the Honda Grom. Aside from sampling some of the city’s finest cuisine, he made the best of his time there, exploring the historic paths on a bike perfectly suited for the job. Here are the fast facts – everything you need to know about the Z125 Pro. Let’s get to it.1. The Z125 Pro has a mission and it is fun with a capital F. Take a look at the styles of bikes on the market and each one fits into a category, built for a specific demographic, to complete a certain job. The Z125 Pro is a bike built for the spirit of motorcycling. From advanced riders to the newly minted, there is very little in the American market that compares in terms of enjoyment, and when fun is the driving emotion behind a bike, when that takes precedence, you can rest assured that you’ll find it.2. Comfort is king. Fresh faced with your M class endorsement or a grizzled veteran of the two wheeled lifestyle – comfort is paramount. The Z125 Pro certainly delivers. With a neutral riding position, riser bars, and comfy seat that has a height of 30.7 inches, it means that you’ll be left in working order when zipping around town.3. Handling? It handles all. San Francisco was the perfect venue – steep hills, fast descents, twisties, pot holes, trolley car rails and enough hustle and bustle to wish any car driver that they were straddling a peppy Z125 Pro, things are good when riding one of these. Featuring a short wheelbase of 46.3 inches, you’d expect it to handle on a dime. Tip-in on the machine, which I’ll admit sounded like a precarious endeavor, is wonderful to say the least. Kawasaki has done an amazing job in creating something so small and so light, yet making it feel planted. In short order, I’m sure new riders will be dragging their knees alongside the best of them. 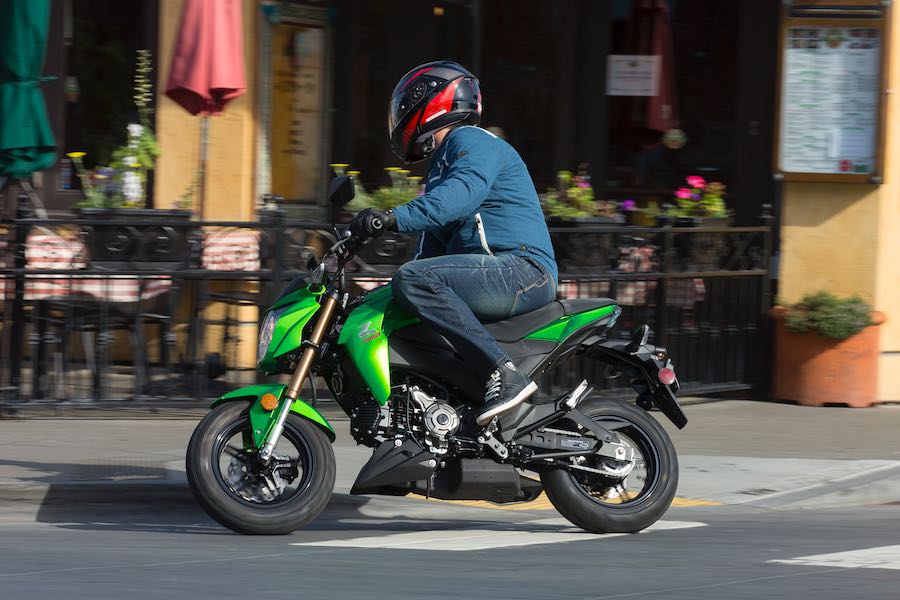 Kawasaki went with a slightly shorter tire profile than its direct competitor, which certainly helps in this department. The Z125 Pro is using 100/90 and 120/70 tires, front and rear. There is a specific reason for this—turning ease. Now, a taller tire profile will cause instability at higher speeds, but the Z125 Pro doesn’t make use of such things so you’ll be getting all of the benefits with none of the downsides.4. Suspension, all you’d want and no more than you need. San Francisco, despite all of its beauty, is showing a bit of age on its street surfaces. Things can get a bit rough, and helping me out along the way were the non-adjustable inverted 30mm forks with almost four inches of travel, plus a pre-load adjustable single shock in the rear. In stock form, things are more than adequate – in fact they’re downright good for this little machine. High impact hits from things like potholes and the like aren’t terrible. Instead, the little Z125 Pro takes it on the chin and keeps humming along. Nor will you find the suspension wandering into wallowing couch like realms. The suspension is simultaneously firm and forgiving. So that means newer riders that happen to be a bit grabby on the brakes won’t live in fear of diving the forks and tucking the front.5. Usability for one, usability for all. A key strength of the Kawasaki Z125 Pro is the user friendly nature of it. Young or old, new or road worn, nothing is out of your depth. The power plant is a 4-stroke, single-cylinder, 125cc air-cooled SOHC fuel injected engine that has a bit of pep to it. Lofty high speeds? No, you won’t be finding them here but it wasn’t designed for that anyway. What the Z125 Pro set out to do was to ride in urban environments and weave in and out of traffic, nimble as can be. Did it achieve its goal? Absolutely…and you’ll be able to pull plenty of hooligan acts while heading to your destination.6. A direct descendant. The Z125 Pro is a direct descendant of the ever popular Kawasaki Z. We’re all quite familiar with the looks – aggressive, angular with a predator’s stance, and the little Z125 Pro despite its size, has all of the telltale signs of the Z line. Sharing similar aesthetics with its bigger brothers, the Z1000 ABS and Z800 ABS, it has a brooding exterior. Looks can only go so far though – there is utility to those good looks, as well. The 2.0-gallon tank of the Z125 Pro is by far my favorite quality of the bike and that might seem a bit odd but being able to tuck in behind it, getting your weight into the front end and leaning the bike over is magic, pure magic. 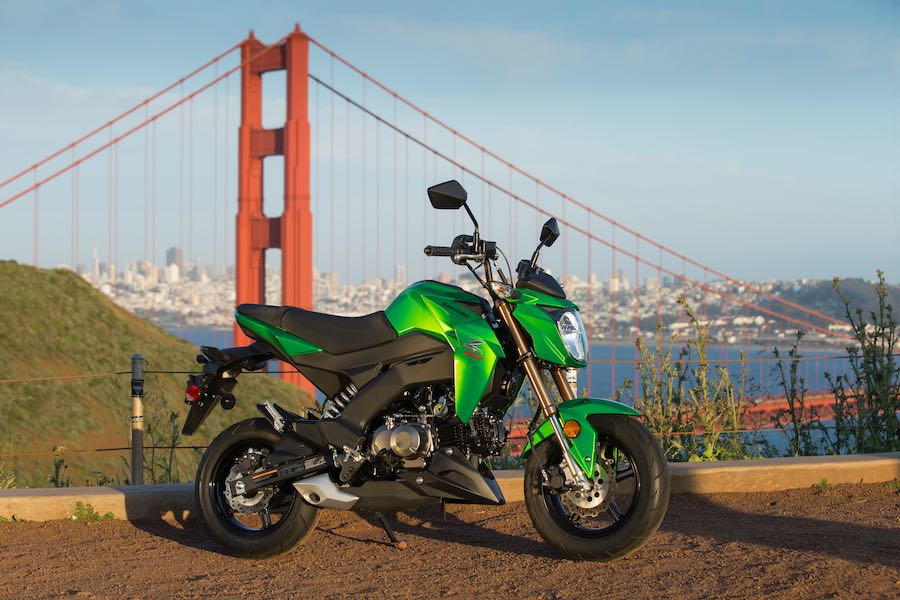 7. Kawasaki certainly wasn’t skimping. The Z125 Pro has some features that we’re used to seeing on larger, pricier machines as well. The dash is quite a classy addition, featuring an analog/digital display, it has all of the information that a newer rider might be curious to know, such as: Fuel level, gear indicator, clock, trip meter, speedometer and so forth.8. Motorcycles – your wallet’s worst nightmare. That statement holds a lot of water. Consider it: You have the bike, then the gear, then the time you’re riding, tires, these things add up. But where the Z125 Pro has stepped in to help is its low price point of $2999, and perhaps more importantly, fuel economy. According to Kawasaki, initial tests were putting up an impressive 135.5 mpg. Three thousand isn’t anything to sneeze at, but for a new bike boasting some pretty serious savings in both insurance and fuel economy, it makes a compelling argument in itself.9. What’s stopping you? The Kawasaki Z125 Pro uses some modest braking systems but let’s be honest, did it need any more? No. It really doesn’t. In the front, we have 200mm petal-style steel discs with Nissin calipers and in the rear, you’ll find a 184mm petal-style steel disc. The brakes give a fair amount of positive feedback, much more than you might expect on a lower cost machine. The pull is firm, and linear in both the front and rear. And yes, you can do all the stoppies your heart desires.10. Who wants it? You do. Or more specifically, motorcycling. You might be one of the many Americans who has shrugged off the “no replacement for displacement” adage but sometimes, we’re a bit slow to the punch in comparison to other countries. That’s okay because Kawasaki saw the trend and answered the call. Now, don’t treat us as gospel. This bike is an absolute blast, great for ripping around the neighborhood with friends, or popping to the shops down the street. But whatever you do, I strongly encourage to check one out when they hit the showroom floors in May. Also, Kawasaki has a full line of performance accessories available for the 2017 Kawasaki Z125 Pro, allowing you to customize to taste!Photography by Kevin WingRiding Style: