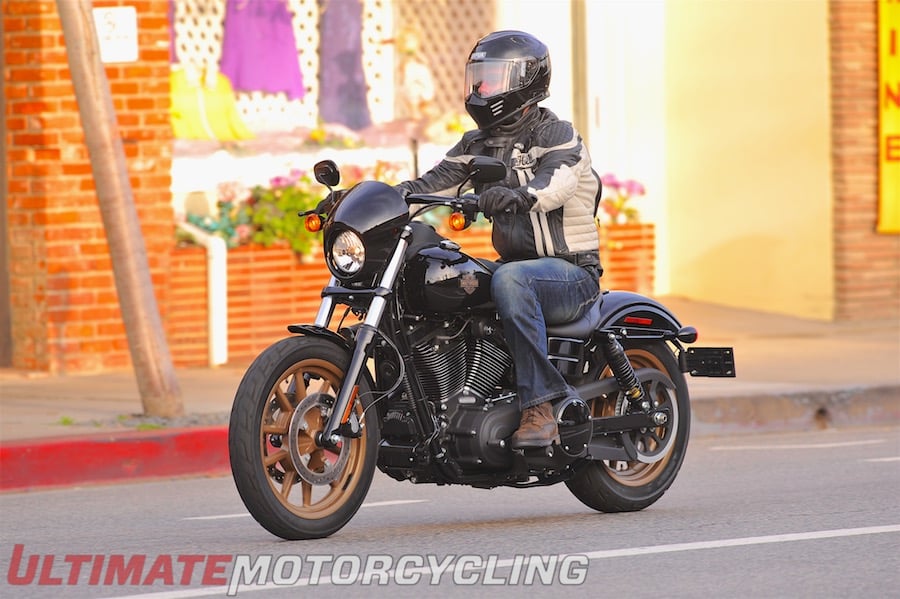 The 2016 Harley-Davidson Low Rider S is the latest addition from the Milwaukee-based V-Twin stalwart brand, and the Motor Company has produced is, once again, nothing short of an instant classic.From the styling, which is unequivocally Harley-Davidson, and the performance, the Low Rider S is more than a worthy addition to the V-twin enthusiast market. So let’s take a quick walk around and ride the Low Rider S—without further delay, here are some quick facts on this new thoroughbred.1. The 2016 Harley-Davidson Low Rider S, above all else, is about style and performance. It is a true follow up to the performance FXR and Dyna models of days’ past that many have lusted after for many years. Startling black and gold draws the eye to every accentuation.From the “Magnum Gold” five-spoke cast aluminum wheels, to the prominent “Heavy Breather” air cleaner and the speed-screen adorned headlight, the Low Rider S is one of the sleekest, aggressive and twins bikes out on the market. In that aspect, it doesn’t share a whole lot with the standard Low Rider model. But with a club look, the Low Rider S certainly lives up to the Harley slugline of “The Powerful, Dark Side of a Legend.” Off the showroom floor it is everything that one could ask for a Harley. It has the ego, the bravado and the stature off those hotly customized, blacked out Dynas you’ve seen parked outside your favorite hangout. Head turner and heart stopper, all in one.2. What truly makes a Harley is the engine. It’s an American made thunderous 45-degree V-twin,  the Low Rider S is one of Harley-Davidson’s most performance oriented power plants to date thanks to the air-cooled Screamin’ Eagle Twin Cam 110ci (1801cc). That makes up the heart of this swarthy hot rod and gives an unmistakable soul. With a claimed 115 ft/lbs of torque at 3500 rpm, the Low Rider S has all the low down grunt you could ever want. It tossed me back into its plush solo seat out of every apex with an intoxicating force. It has torque throughout every gear and roll-on power to spar without a misstep in the fuel management. For a performance twin, it does quite well in the fuel economy department; the Low Rider S arrives a claimed 44 mpg. If those numbers are accurate, you’re looking at roughly 200+ miles with a 4.7-gallon fuel tank.3. Clutch feel and shifting adds to the fun. An ample ca-thunk and you’re in business. The Low Rider S’s six-speed transmission is stiff and confident, but the best part is the extended use of third and fourth gears. I spent most of my time hovering between the two while tackling the turns of Angeles Crest Highway in Southern California. With a medium clutch pull, my left hand wasn’t on the verge of developing carpal tunnel.4. Part of the allure of a Harley twin is the sound, and nobody can argue that. It’s the thick, undulating thrum of something that has been on the streets for years; a sound best heard through the long, straight black Tommy Gun mufflers that have somehow managed to pass sound emissions standards. It isn’t obnoxiously loud or ear-piercing; it’s more than a hearty growl when one pours on the throttle. Hearing that Screamin’ Eagle 110 do its work will have you nodding your helmet in approval in no time.5. With mid controls and low bars, the Low Rider S is set to cruise. With its standard cruising position, I melted into that supple solo seat with my arms slacked on the bars and easy to navigate controls all within a thumb’s reach. 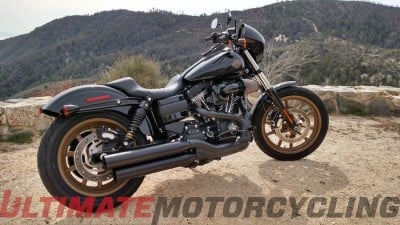 6. The Low Rider S makes use of an all new Wrinkle Black console, which aside from your standard speedometer and tachometer  also can display information such as fuel economy, range, miles traveled and my favorite, a gear indicator. The disadvantage here is that is happens to be a bit out of the way and on the fuel tank. For those who wear a full-face helmet, this means your peripheral view to that information is cut out and you’ll need to take your eyes off the road momentarily. But on the long straights, I did make use of that information more than a handful of times. Also, a handy analog fuel gauge sits on the left side of the tank.7. ABS.  I tried to make the system falter—I really did. I full-fisted them and again, the bike slowed down. They work without any shuddering, which removes one more variable from panic situations. Since we’re on the subject of stopping, let’s talk about the brakes. The Low Rider S makes use of four-piston calipers rounded out by dual 300mm rotors up front and a single 292mm rotor in the rear with caliper services offered up by Harley’s patented expansion rotors. The feel at the lever is on the heavier side, but nothing that causes undue stress or strain on the rider. Both the front and rear brakes are incredibly progressive—if you would like more stopping power, take it.8. Handling is controlled up front by Showa single cartridge 49mm forks that are non-adjustable, and two Showa rear shocks with preload adjustment. Harley’s technical staff say that the bikes have a baseline suspension set up for a rider in the 180-pound range. For the heftier American market, that will probably do just fine; for me, the ride was superb. The ride was cush enough to soak up the rough spots of Angeles Crest Highway above California’s San Gabriel Valley, as well as the many terrible potholes across the mean streets of LA. When up in the twisties, I didn’t experience any diving of the front end.Handling was rock solid, holding lines just the way it should, and with a maximum lean angle of about 30 degrees, the Low Rider S gives you quite a bit of lean. Handling on the new Harley phenomenal and confidence inspiring. Find your pace and let the bike do the rest. The tubular steel frame feels stiff and grounded, even when taking corners with a more spirited entry speed. Its stability is in no doubt, thanks to the ample stance courtesy of a 64.2-inch wheelbase, and once those tires are warmed up, glued in.9. The Low Rider S is on the heavy side and when I read the weight numbers, I was shocked. With a reported wet weight of 674 pounds, you might think it would translate that into the ride. That couldn’t be further from the truth. Though the Low Rider S has some heft, it’s light on its feet and flicks into corners with the smallest amount of input into the bars.10. When you buy Harley, you expect to pay a premium. The 2016 Low Rider S has an MSRP of $16,999 and for many Harley fans—that’s right in the area they would be willing to pay. It will only be available in black because, let’s be honest, if you’re in the market for a true-blue performance twin, what other color would you want?RIDING STYLE
Helmet: Simpson Ghost Bandit
Jacket: Held Harvey 76
Gloves: Held Touring Touch
Jeans: iXS Cassidy II
Boots: TCX X-BlendStay clicked to Ultimate MotorCycling for a full review of the 2016 Harley-Davidson Low Rider S.