Most people will be taking in the festivities at Daytona Bike Week but one man, who happens to go by the well-earned name of Grizzly (Urs Pedraita), will be setting off on a potentially record-breaking journey at 1 p.m., March 11.Grizzly will be riding a Victory Cross Country around the world – covering all six continents in under 100 days. As of now, the current record sits at 120 days to make the entire journey, but Grizzly has some serious plans; he says he’ll stop as little as possible and will even travel into the Antarctic region.When we think Antarctic expeditions, we don’t think two wheels. As much as we love motorcycles, that just isn’t what comes to mind when dealing with one of the harshest climates on earth. But Grizzly will be breaking down my misconceptions about what can be done and has been training for months to acclimate himself with sub-zero riding all while being done on an American twin – the Victory Cross Country. Grizzly and his bike are going to be pushed well beyond what Victory engineers originally had in mind; he’ll be taking on, sleet, ice, snow, sand, mud and everything in-between along the way.Then again, what can you expect from a guy that has already gotten a taste of this. In 2013, Grizzly put down 9,000 miles in just 37 days during the winter, no less. 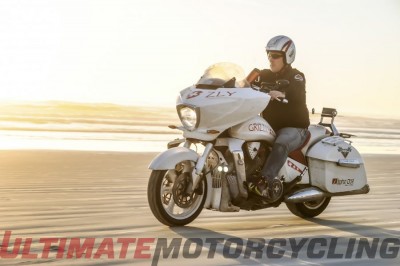 Additional items on his Victory Cross Country include navigation systems, a 33-litre fuel tank, a customized seat with back support and two LED headlights added on the front for better visibility during his long night rides.As you’d expect, his Victory Cross Country has received a few upgrades to keep him going while out on the road and trail. Navigation systems, an 8.7 gallon fuel tank, customized seat with back supports and additional LED headlights added for night riding.Fans can follow his progress using the “Grizzly Tracker app” which shows his exact location every step of the way.We wish Grizzly the best of luck on his record attempt. Its stories like this that really make one look at the calendar and consider that trip that we’ve all been postponing for the past decade or so. Here at Ultimate Motorcycling, we support any brave soul who is willing to take on an adventure like this or any two-wheeled escapade.Grizzly’s 100-day mark has a tentative completion date of May 20, 2016. Victory Cross Country owners are being encouraged to show their support for Grizzly by partaking in one lap of the Daytona 200 road course, just prior to his departure.Grizzly, we wish you the best!