The last time I found myself aboard a Harley-Davidson Road Glide Ultra, it was 2013 and I was leisurely working my way through the southern flank of Ozarks Mountain Country. Riding solo, I was in no hurry and had no particular place to go. For that sort of unhurried touring, the Road Glide Ultra took me through the constantly twisting back roads quite competently. Of course, I didn’t quite realize what I was missing.Jump forward two years and the landscape of Harley-Davidson tourers has changed. Since 2013, the Road Glide Ultra had been absent from the H-D line, unless you were willing to pony up for a CVO. Now equipped with the Project Rushmore enhancements that have become an integral part of The Motor Company touring experience, the new Road Glide Ultra is an impressive touring machine that should entice every previous owner into an upgrade.While the Project Rushmore improvements are numerous, the most important deal with performance and functionality. The new Road Glide Ultra has the impressive 49mm front forks and beefier triple clamps, and when paired with the upgraded frame from 2009, brings the handling into the 21st century. Forget any sort of wandering and vague feelings going into corners — the Road Glide Ultra holds its line and the Harley-Davidson branded Dunlops are allowed to do their job, with nearly 32 degrees of cornering clearance on each side. The nice fat 17-inch front tire is especially helpful.Sure, the Ultra is not about pushing the envelope of handling — it weighs over 900 pounds with the six-gallon fuel tank topped off, after all. However, you will develop confidence in the chassis that will come in handy when necessary.For instance, on one ride we were caught out late and the sun was dropping with many more twisting coastal miles to go. That meant picking up the pace to make the most of the diminishing daylight. In addition to the stiff chassis and nicely balanced suspension —comfortable, yet not mushy — the Road Glide Ultra has excellent linked brakes with three 11.8-inch rotors and Brembo calipers, as well as standard ABS.This is important, as the Reflex Linked Brakes allow the rider to keep his right hand on the grip when approaching and executing a corner. This increases control, as well as reduces fatigue. For the most part, the Reflex system is transparent, except for the fact that you can decelerate at an impressive rate without having to balance the braking systems.In low-traction situations, you may trigger the clunky ABS, but you have to almost intentionally over-brake to make it happen in the dry. While some performance-oriented riders may balk at linked brakes, they work great on a bike like this. 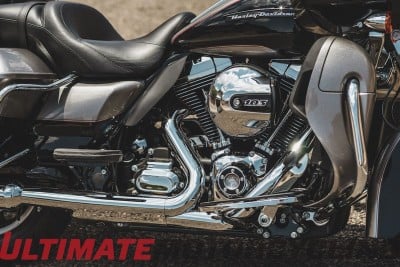 Harley-Davidson engineers have set them up so they kick in at around 20 mph—depending on how hard you push the pedal — which means you avoid any unwanted slow-speed surprises. Plenty of engine compression braking from the new Twin-Cooled High Output Twin Cam 103 is of great help, obviously, and the 6-speed Cruise Drive transmission makes it easy to always be in a usable gear. One gripe — neutral is hard to find at a stop.Besides slowing you down nicely, the High Output motor that debuted as part of the Project Rushmore package propels you along quite handsomely. Clearly, Harley-Davidson pads down the acceleration by slowing the rate at which the revs grow, but that claimed 105 ft/lbs of torque would be hard to manage without some electronic help.With that much grunt on tap, you can confidently pass on the Interstates without dropping out of sixth gear. Even in top gear, twisting the throttle at 65 mph will take you into the 90s helpfully fast, giving you a great advantage on the open highway.Make no mistake about it, this is a stately ride. With the forks kicked out over 29 degrees (offset triple clamps add three-plus degrees to the steering head angle), and a wheelbase of 64 inches, this is a machine that allows you to set the highly intuitive electronic cruise control at 85 mph and relax (and maybe keep an eye out for ticket writers).Although the fork-mounted batwing fairing gives the Electra Glide series its iconic look, I have to say that I prefer the bulky and boxy frame-mounted sharknose fairing. The batwing looks much sleeker and appealing, but from a functional standpoint, the sharknose is tough to beat.With fixed mounting to the frame, the sharknose punches a huge hole in the wind, while the Triple Splitstream vent reduces head buffeting to about zero. Additional air comes in below the fairing, and the Road Glide Ultra stays comfortable, even when plowing through California’s Central Valley in triple-digit temperatures. Experimenting with the mid-frame air deflectors and vented fairing lowers can help when temperatures drop.If you are on a high-speed two-lane road with plenty of 18-wheelers coming in the opposite direction, you will quickly grow to appreciate the frame mounting; instead of the force of the opposing traffic’s wind hitting the fairing and transferring into your arms, it is directed toward a sturdy chassis that dissipates it effortlessly. The difference is not insignificant.Another advantage of the frame-mounted fairing is that you have a huge dashboard, and it does not move while you are riding. In it, there is an aging GPS system that could use a higher-resolution screen and updated software—wireless integration with smartphones would be outstanding.Still, the Boom! Box 6.5 GT audio system has its upside. Sound is good, and once you get used to the handlebar controls — two joysticks — you can move through the menus quickly. They are less instinctive than they should be, however, and if you don’t ride regularly, you’re likely to forget the paths to the functions you might want. My one humble wish—replace the unnecessary battery gauge with an analog clock.Compared to the previously fiddly saddlebags, the Road Glide Ultra’s latest Tour-Pak system is a pleasure to use. A single discreet latch opens and closes the side bags effortlessly, while the top box has the older-style latch. That’s not an issue, as the top box closes more predictably, and the latch is easy to manipulate.The two saddlebags have decent storage capacity, and the clean top opening is convenient, especially compared to traditional leather saddlebags with hidden clasps. The top box is especially cavernous, and can swallow up helmets and jackets— quite handy at stops.Frustratingly, getting the tubular pin tumbler lock on the Tour-Pak in the right position takes more effort than it should, considering how convenient the One-Touch latches are. On the upside, the same key is used to lock the ignition switch. Personally, I prefer a standard key that stays in the ignition when operating a bike, as it is easier to look after. 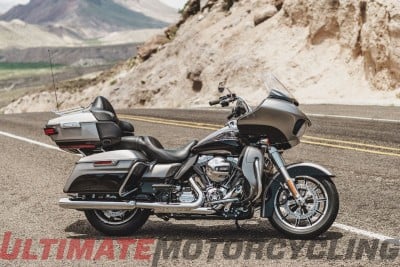 Ergonomically, the Road Glide Ultra is a pleasure. The bars and windshield are at just the right height for me and are pulled back nicely. The Electra Glide Comfort Stitch seat is extraordinarily comfortable and 500-mile days are not hard on the posterior. At 5′ 10″, I had no problem being flat-footed at a stop—as did 5′ 6″ Managing Editor Kelly Callan.Harley allows you to manually initiate the Engine Idle Temperature Management Strategy that prevents the rear cylinder from firing and creating heat at a stop. I rode in some high temperatures and the heat never bothered me, but it is nice to have this as an option.The hydraulic clutch has a reasonable pull and, as discussed earlier, you won’t wear your right hand out due to the linked brakes and cruise control. The heel-toe shifter is flawless, and the large floorboards allowed some leeway for my size 9 boots.Should you be kept out after dark, and I was, the dual Daymaker Reflector LED headlights put out a freeway-friendly blast, as long as you have them set to high beam. I was easily outrunning them at 65 mph in the standard setting. Fortunately, when running high beam, none of the vehicles around me appeared to be bothered. Plentiful LED lighting in the back helps keep you safe at night.When it comes to fully dressed touring, the 2016 Harley-Davidson Road Glide Ultra is a difficult bike to best for high-speeds and long distance. The beefy fairing sets the tone on the road, and you get the respect you expect, whether you are cruising down an open highway, working your way through the mountains, or stopped at a friendly diner. Welcome back.Riding Style:Story from Ultimate MotorCycling magazine.