The new 2016 BMW R 1200 RS, which takes some stylistic direction from its fire-breathing cousin, the S1000RR, has big shoes to fill in the excitement category. What I discovered was not a rugged adventure machine, nor is it a cumbersome touring bike built to roll the odometer over until the end, nor a knee-drag-beckoning powerhouse.

What I came to realize is that the BMW R 1200 RS is a hybrid, fitting comfortably between those categories and plucking out the finest aspects of all the aforementioned disciplines.

Throwing a leg over the R 1200 RS you’re met with refinement and comfort from every angle. The controls are always within thumb reach and quite simple to navigate. The large mult-ifunction display with virtually anything you could ever want to know about the bike is available at the touch of a button.

A relaxed, upright riding position with raised bars, a supple seat (32.3″ height) and wide foot pegs greet the rider. At a height of 5’10”, I’m able to easily rest my feet flat on the ground when standing still. The ample 4.7-gallon tank is nestled nicely between the rider’s knees and makes for an easy grip when healthily leaning into a corner.

At low speeds, the reported weight of roughly 520 pounds doesn’t come into mind. In fact, the bike seems unaware of its size, regardless of how hard it’s being pushed or whatever gas station you’re rolling into. Corner entry is consistent and predictable; just a light push to the outside handlebar and the bike stays on line. What makes this a confidence inspiring bike is how compliant it is when leaned over; if you need to tighten or widen, it does it without a hint of resistance.

An 1170cc water-cooled boxer twin engine, which has become a trademark of BMW’s motorcycles, powers the bike, and delivers a claimed 125 horsepower at 7750 rpm, and peak torque of 92 ft/lbs at 6500 rpm. Those numbers are certainly nothing to scoff at, and a slouch it is not.

At a stop, a quick blip of the throttle will introduce the familiar shaft drive-induced tug to the left which BMW riders have come to know and love. Even more, and due to BMW choosing to tune the bike for a ride with more torque, the 2-into-1 exhaust has a pleasingly low tone and syncopated note.

At speed, the output is a comfortable and fulfilling one that won’t distress anyone on longer treks. The healthy torque can be felt at nearly any rpm with a nice helping of throttle. That speaks to another point — the power available is enormous, with roll-on throttle ever present. Wrong gear? Just add throttle and the R 1200 RS pulls away without a misstep.

With a redline of 10,000 rpm, I personally felt that the engine seemed to prefer hovering in the 4k to 7k rpm range and while the bike was happy to go above that, nothing is gained on the street by running the engine out. 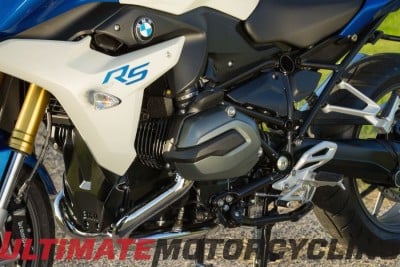 Don’t let that deter you — the R 1200 RS can – and will – put up triple digits on the speedometer in an instant when asked, and there isn’t any discomfort. It’s a blissful ride especially when banging through the gears.

The engine package is rounded off with two welcome additions — a slipper clutch and BMW’s GP Pro Shift Assist. GP Pro Shift Assist offers up and down clutch-less shifting, as well as a rev-matching feature. In lower gears, the GP Pro Shift system tends to feel a bit heavy, causing a little too much feedback in the final drive than I’d like, but after clutching up to second gear or when the engine is being pushed, it’s seems to work out any kinks.

While that might seem like a bit of a downside to the system, the clutch operation is feather light, and really reduces any strain that someone might find on other hydraulically operated clutches.

Braking is handled by 320mm dual rotor Brembo four-piston fixed calipers up front, and a single 276mm rotor out back matched to a dual-piston floating caliper. Braking power is progressive and consistent, requiring only single finger in most circumstances. They do have a strong initial bite which takes a bit of acclimation but nothing that impedes your ride.

The base model still has some of these amenities, however it has Automatic Stability Control (ASC), which is a stripped down version of DTC; it lacks a lean angle sensor and, thus, isn’t as accurate as the higher end variants. Another option is the Rider Modes Pro feature, which allows for a more aggressive “Dynamic” suspension setting and a completely customizable profile for the rider to use at his or her digression.

Inverted 45mm Sachs telescopic forks and a single Paralever rear end make up the suspension system on the BMW R 1200 RS. With the optional Dynamic ESA, you’re given a lot of personalization choices. Two riding modes are available — Rain (amplifies the DTC and ABS input) and Road (unrestricted settings).

The three preload settings offered are: Single rider, single rider with luggage, and two-up, all signified with some fun little helmet or luggage icons on the dash. With the bike in Dynamic mode, the suspension stiffens up to a fairly firm setting. As you move into the higher weight settings (single rider with luggage and two-up) this only further stiffens the suspension and when being pushed, that’s something we all can appreciate.

The Road mode is the antithesis of this, dramatically softening up the dampening for those uninspiring freeway rides. For the touring rider, that could be a useful aide that will undoubtedly cut down on fatigue. All of your riding modes can be changed on the fly, yes, even turning off DTC and ABS.

For my purposes up in the canyons, I made use of the Dynamic mode. The suspension reacted perfectly, feeling rock solid coming in and out of the any turn, thanks in part to the 60.2-inch wheel base; the bike is impervious to becoming upset when in a corner or on rough surfaces. An aggressive riding style or just taking in the sights, it just refuses to be shaken. 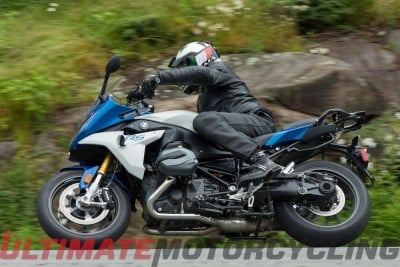 Fuel economy on the BMW R 1200 RS is quite impressive and, in my experience, didn’t drop below the low 40s in terms of mpg, with its height reaching 53 mpg at freeway speeds.

Other creature comforts available on our Premium Package R 1200 RS included Keyless Ride, Cruise Control, Chrome Exhaust, Tire Pressure and Oil Level Monitors, GPS Preparation, Center stand, Dynamic ESA, Luggage Rack and Saddlebag Mounts. These do happen to come at a premium price of $17,770, but some of these cannot be lived without once had, namely the GP Pro Shift assist and Tire Pressure Monitors are amazing tools.

At the end of a ride, it’s clear that the R 1200 RS is truly an interdisciplinary motorcycle, excelling where a single purposed bike cannot; it can and will be there when you need to roll out hundreds miles in comfort or bare down through the canyons on a Sunday morning.