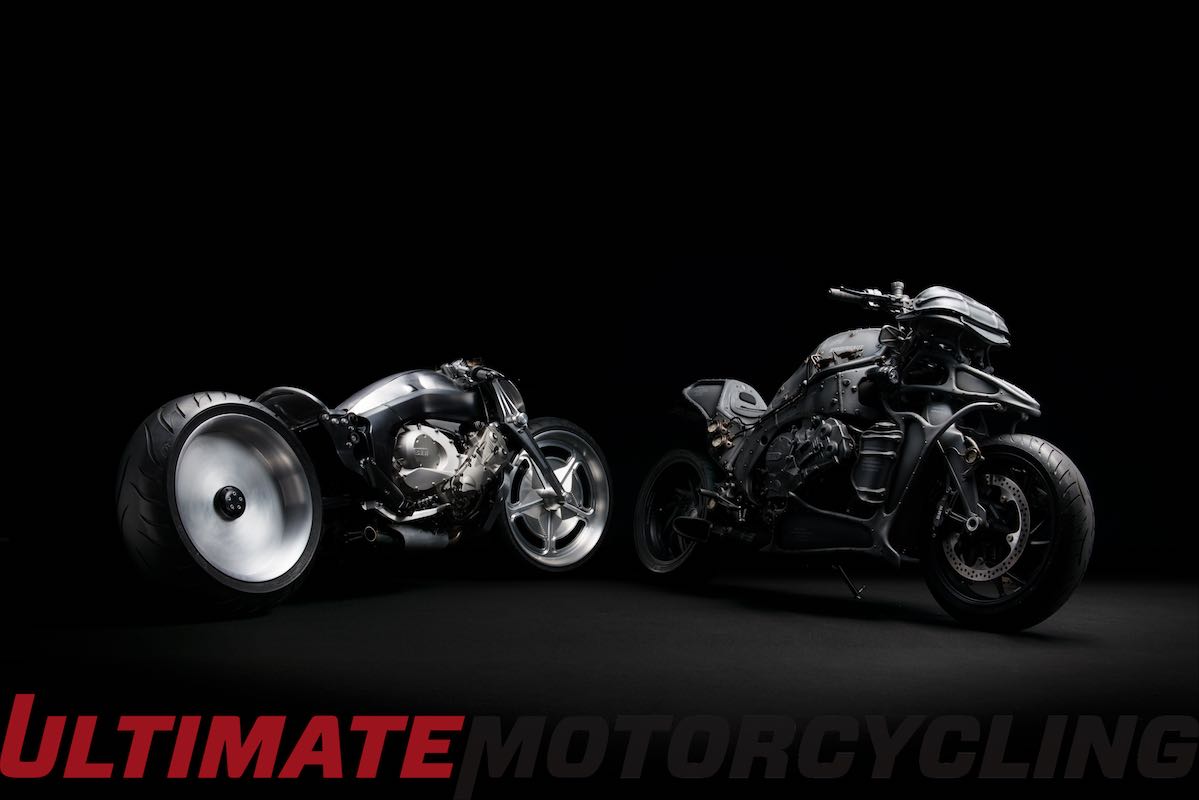 BMW Motorrad Japan is always challenging its country’s customizers. Last year, four Japanese custom bike builders took the already sleek BMW R nineT – a bike designed by Roland Sands – and went to work.When the work wrapped up in September, four truly unique custom R nineTs were born – the Cyclone, Highway Fighter, Clubman Racer and the Boxer.This customization trend continues with a BMW Motorrad Japan’s new project – Ignite Straight Six. This time, the builds were based on radically modified K1600GTLs, which are powered by 1649cc inline-six engines.Taking the helm for the project were Kenji Nagai of Ken’s Factory and Keiji Kawakita of Hot-Dock Custom-Cycles. After weeks of designing and building, all that remained were the K1600GTL’s frame and engine. Nagai created the “Ken’s Factory Special,” and Kawakita the “Juggernaut.”Nagai’s custom uses a handmade, girder-type front fork – popular on choppers – and massive wheels – 23” up front, and 20” out back. The K1600GTL’s fairings were replaced by a tiny aluminum front cowl, and the stock rear subframe and seat were ditched for the low aluminum seat.Other highlights include various parts crafted from aluminum, such as the covers for the fuel tank and radiator, and the handlebars.Speaking of the build, Nagai says “At first I had a bagger style in mind that grew out of the tourer image. But simply transforming a tourer into a bagger was a bit too obvious a choice. So I thought of a different approach. I settled on the digger style. The long, thin digger style would make the in-line six-cylinder engine look even more prominent.”Kawakita’s Juggernaut is the complete opposite, not relying on the minimalism found on “Ken’s Factory Special.” Kawakita’s design is opulent, looking like “a synthesis of Mad Max metal and Jules Verne’s imaginations.”The Juggernaut features BMW Motorrad Duolever front suspension, and skeleton of aluminum tubing that provide a military look. Reminiscences to the BMW GS range are the dual fog lights and the front trail-like beak.Kawakita says history was his biggest influence: “I found an old photograph of the cockpit of a convertible that looked like something from the near future, and I got the idea of making a bike that had that kind of atmospheric feel. Looking at the front forks and Duolever suspension, I thought I could do this with the K 1600 GTL.“But the actual work was long and hard, a tough job to handle. Even when I finished, I still wasn’t really sure whether the work was complete. But that’s the thing about customizing, isn’t it?”BMW’s Ignite Straight Six is yet another project that highlights the best custom motorcycle builders in Japan. Wonder what’s next? Maybe some custom GS builds? Who knows, but from the custom projects BMW Motorrad Japan has spearheaded so far, we won’t be disappointed.For additional information, visit Ignite Straight Six.2015 BMW Ignite Straight Six Project Photo Gallery: