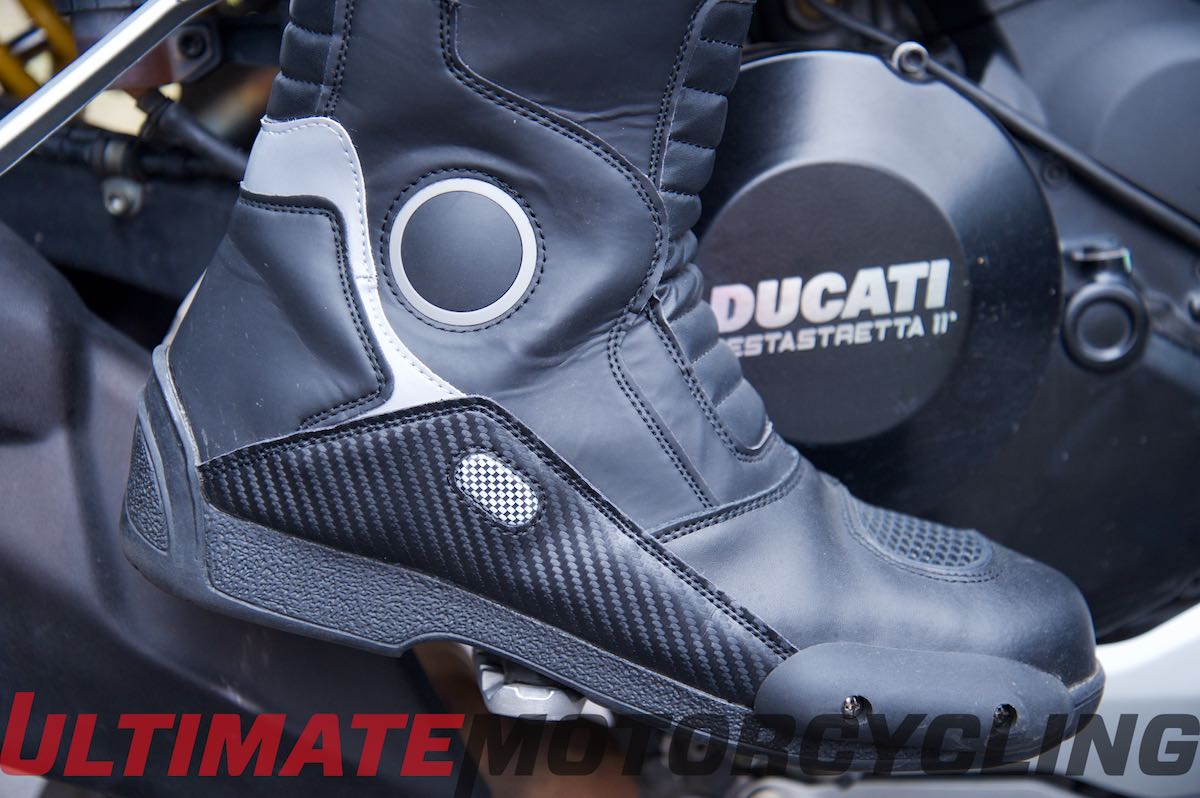 Low budget doesn’t always mean crappy product. There are a few companies designing motorcycle gear that’s loaded with features and offered at a low price – such as Joe Rocket.A perfect example of this feature-forward/low price concept is the new Joe Rocket Ballistic Touring Boot. The full-size boot offers protection and comfort without emptying the pocketbook, and a style that simply works.Be warned – although considered a touring boot, the Ballistic Touring is not waterproof, but rather “water resistant.” This means the boot can withstand the passing shower or – from our experience – up to about an hour in a downpour.

The Ballistic Touring boot – part of JR’s series of Ballistic wear that also features jackets, pants and gloves – is created from a lightweight synthetic leather that is double-stitched in the high-flex areas and around the reinforced gear-shift area (featured on both boots). And lightweight means lightweight; the Ballistic Touring feels lighter than an average hiking boot.For further protection, the boot features internal reinforcement in the shin, ankle, toe and heel areas, and injection-molded toe armor. Though reinforced, these areas don’t hamper movement, allowing the foot to fully flex during intense riding.Flexibility arrived out of the box; this was immediately noticed while testing the new Aprilia Caponord 1200 Rally in Sardinia. The boots required zero break-in, though they did loosen up after about 1,000 miles of touring/light off-road ADV riding.While in Sardinia, our 200-mile ride included every situation from touring to serious sport riding to some off-road passes. Whether on the balls of my feet while standing off-road or pivoting my feet while slightly hanging off in some spirited canyon riding, flexibility remained in the forefront, allowing me to focus on the task at hand. 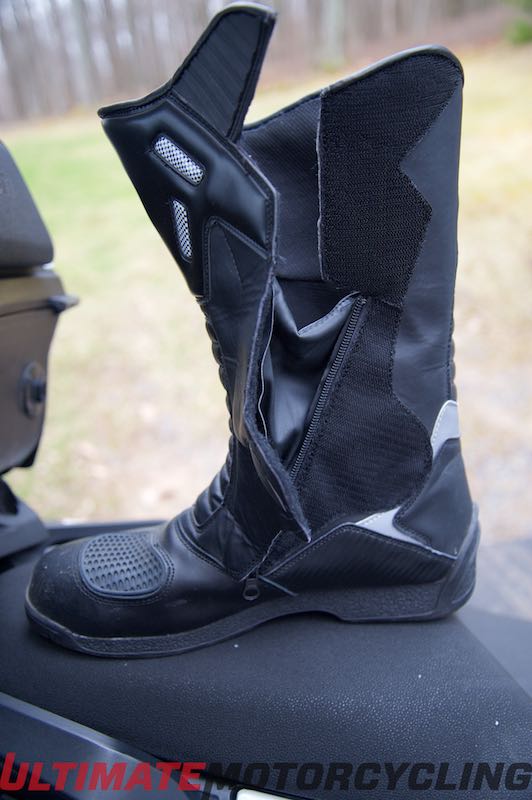 This flexibility was present when using the rear-brake in the off-road sections, something many big-bike ADV riders battle with when wearing a stiff boot. The Ballistic Touring’s flexibility also allows for comfort while walking.On the subject of off-road riding, don’t let the sole’s design deceive you; it provides surprisingly good grip on rubber pegs, even in the wet. While adventure riding, I crossed a few creeks with these, and never had slippage issues – even with sometimes-slippery rubber inserts installed on my Ducati Multistrada’s footpegs.But if river crossings are your thing, expect wet feet. As stated above, the Ballistic Touring boot is water resistant, not waterproof. The boot will withstand the occasional shower, and some steady rain. On one highway stint in heavy downpours, the boots soaked through in just under an hour.Looking for waterproof? Dish out a few bucks more and purchase the Sonic R, which are more of a sport-touring boot. The Sonic R have slippery soles, which makes standing on slippery pegs during ADV rides a bit of a challenge.The Ballistic Tour slips on easily due to its large-side entry. This entry consists of a zipper that’s nearly the vertical-length of the boot, and a Velcro closure over the zipper. I love an extremely tight boot around my shins, and the Velcro closure over the zipper allows for some tightening. But it could use more; part of this problem may be the size I chose. I wear an 11.5 US, but Joe Rocket doesn’t offer half sizes; the closest offerings are 11 or 12. The 12 is a bit roomy, so I’m sure the 11 would be a more ideal fit – especially for a rider like me who loves a snug boot. Plus, my Sonic R boots are 11s, and they fit perfectly.The synthetic leather has minimal breathability, which may cause some warm-weather riding issues for riders piloting a bike without much airflow to the feet. On adventure-styled bikes and sport tourers with constant flow to the feet, discomfort never became an issue. I rode a few shorter rides in temps as low as the high 30s, and longer rides in the 80s, and never had any cold/heat issues; but this is with correct base-layer socks that allow the feet to breathe, also.Other added features include a replaceable toe slider – Joe Rocket is known for offering sportbike-type toe sliders on touring boots – and reflective material on the back and sides of the boot for added safety. 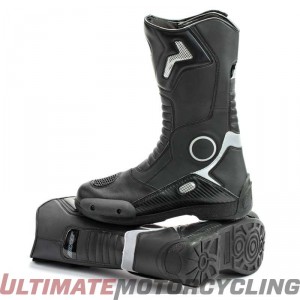 The Joe Rocket Ballistic Touring boot is ideal for short weekday rides – such as riding to work – and longer weekend tours when rain is not in the forecast. But with some simple slip-over rain booties for extended rides in the rain, the Ballistic Touring boot would be the optimal companion for long-distance touring.I have about 2500 miles on my boots, which includes touring, short rides and light-duty ADV riding (aka, fire roads), and except for lack of extreme snugness adjustment and having to pack some rain booties, complaints were zero. And after whacking a few trees and hitting the dirt a few times off road, the Ballistic Touring boot held up quite well.Protection, minimal complaints, and comfort – not bad for a boot that is offered for just under $100.The Joe Rocket Ballistic Touring boot is available in only one color – black –  and in US sizes 7 -13 (no half sizes). For additional information, visit Joe Rocket.